Sole Volante made up more than 15 lengths from behind a fast pace and wore down odds-on favorite Independence Hall inside the final furlong to claim the $200,000 Sam F. Davis (G3) at Tampa Bay Downs on Saturday.

Awarding Kentucky Derby qualifying points of 10-4-2-1 to the top four finishers, the Davis was contested over 1 1/16 miles on a fast track, and the Patrick Biancone-trained Sole Volante covered the distance in 1:42.60 while registering a 2 1/2-length score. Independence Hall was more than 11 lengths ahead of Ajaaweed, who finished a neck in front of 54-1 chance Tiz Rye Time.

"We knew from the beginning he's a good horse," said winning jockey Luca Panici. "He's very intelligent and when you ask him something he's a quick learner. I asked him about the three-eighths pole and I never had a doubt."

This was the second career stakes win for Sole Volante, who broke his maiden on the turf by three lengths at Gulfstream Park West in October and followed up with a two-length triumph in the Pulpit S. at Gulfstream on Nov. 30, also on the turf. In his dirt debut last month in the one-mile Mucho Macho Man S. at Gulfstream, Solo Volante finished third to Chance It. Sole Volante has now bankrolled $196,310.

"We love him a lot," said Biancone. "He's fantastic on the turf and in America, the life is the dirt, so I ran him in a sprint race at Gulfstream just to see if he could handle it and let him take some kickback. He did everything perfectly but ran a little bit early that day and struggled a little the last sixteenth.

"Today I said to Luca, let him relax and run the last three-eighths and that's what he did. He's a very interesting young horse."

Bred in Kentucky by Flaxman Holdings, Sole Volante last sold at auction for $20,000 at the OBS April juvenile sale. He's a gelded son of Karakontie, upset winner of the 2014 Breeders' Cup Mile (G1), and out of the Kingmambo mare Light Blow, a half-sister to English highweight Shiva and Epsom Oaks (G1) winner Light Shift. The latter produced English highweight Ulysses.

Sole Volante himself is a half-brother to Grade 3 victor Explode. 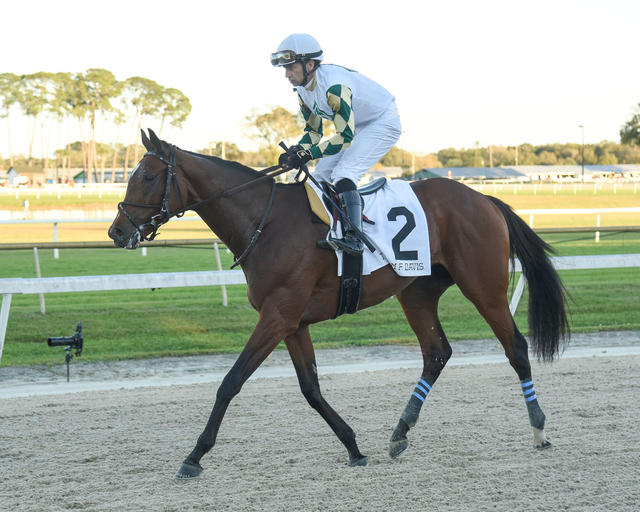