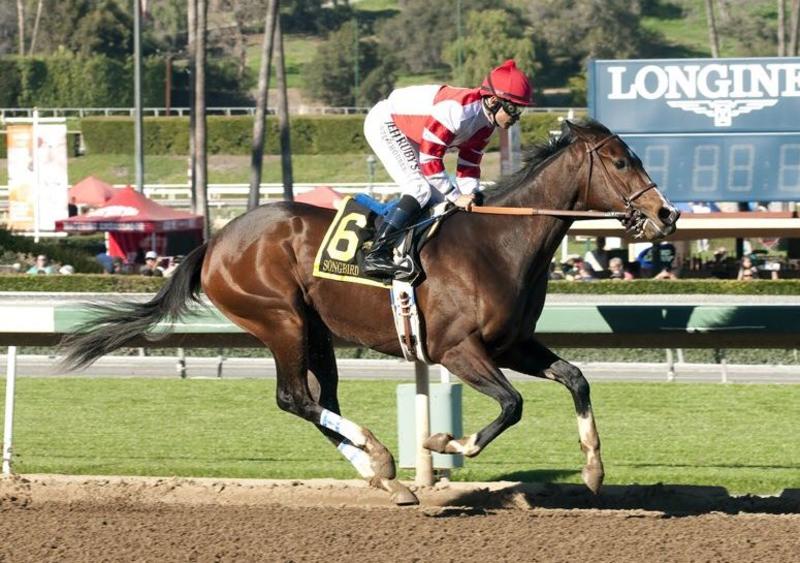 Fox Hill Farms’ Songbird made her three-year-old bow on Saturday at Santa Anita Park in the $300,345 Las Virgenes S. (G2), and the dark bay miss proved once again why she ranks first on the Kentucky Oaks (G1) leaderboard by a wide margin.

The daughter of Medaglia d’Oro took the lead out of the gate and never looked back under jockey Mike Smith, whose only job was to stay in the saddle as Songbird loped around Santa Anita’s main track. The Jerry Hollendorfer pupil set splits of :23.63, :47.01, 1:10.99 and 1:23.34 all under her own power with no urging from Smith.

Songbird opened up by as much as 10 lengths in galloping fashion before being geared down in the stretch to be 6 1/2 lengths clear on the wire in a final time of 1:36.84 for a mile on the fast dirt.

The Las Virgenes is part of the Road to the Kentucky Oaks series of points races and awarded Songbird another 10 points to bring her leaderboard total to 40 currently.

Land Over Sea proved best of the rest in second, 3 3/4 lengths up on She’s a Warrior, to take home four points. The Bellamy Road filly filled that same spot behind Songbird in the Chandelier S. (G1) last year and moved from 21st to 16th on the leaderboard with her second in the Las Virgenes.

Both She’s a Warrior and Merirosvo – third and fourth on Saturday – debuted on the leaderboard with two points and one point, respectively.

Songbird is now a perfect five-for-five in her career and has banked $1,682,000 in career earnings. The dark bay lass was honored with an Eclipse Award as the 2015 champion two-year-old filly after scoring in the Del Mar Debutante (G1), Chandelier and wrapping up her season with a 5 3/4-length romp in the Breeders’ Cup Juvenile Fillies (G1).

Mike Smith, jockey Songbird: “She has such a high cruising speed, she has gears.

“You always worry about horses that are brilliant at two. Sometimes they won’t mature or grow anymore at three. You’re anxious to see what will happen.

“Favorite Trick was one that fooled me; he was brilliant as a two- year-old. He won all eight of his races at two but then didn’t win the biggest ones as a three-year-old. You’re anxious to get it over with and she seems to have improved. She seemed to up her game even more, especially mentally. She was very happy today and took it all in stride. I’m just blessed to be the one that has to make her carry the weight.”

Jerry Hollendorfer, trainer Songbird: “It was nice to get that race out of the way. No matter how good your horse is, you’ll always be a little bit anxious.

“She broke good, she has speed. There’s no doubt in my mind that she could rate if she had to, but usually she doesn’t have to. If somebody did something funny, I think she could be flexible and adjust to that.

“I was so pleased to see her way out there and cruising along pretty easy. At least now we got a race in her and we can try to make some more plans. We want to run here at Santa Anita. What we do between now and the (April 9) Santa Anita Oaks (G1), I don’t know. If we do anything. We’ll think about it and try to do the right thing.”

Rick Porter (Fox Hill Farms), owner Songbird: “It’s hard to explain the feeling. She just gives you goose bumps and you just wonder ‘How did I get this horse?’ I don’t think I’ve ever had one that’s so dominant and does things so easily.

“It would be nice to win the Kentucky Derby (G1), but I’d like to do it with a nice colt. I don’t like the (Kentucky Derby) point system. We’d have to run in the Santa Anita Derby (G1) with her. I think it’d be great for your ego, but the smart move is to stay on the path we’re on to the (Kentucky) Oaks.” 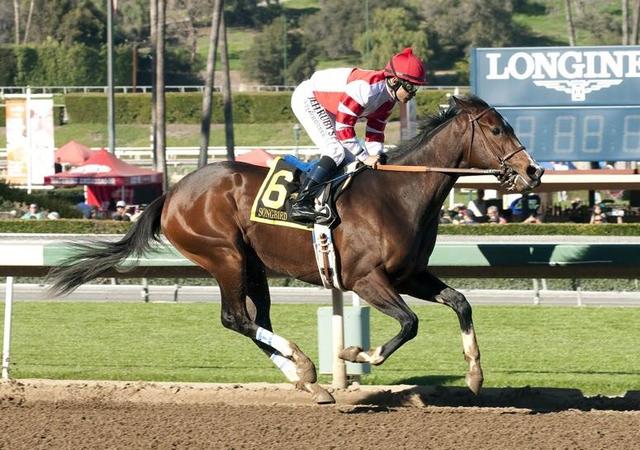