Spectacular Bid: 40th anniversary of a Triple Crown that got away

"The greatest horse to ever look through a bridle."

While late Hall of Fame trainer Bud Delp’s description of Spectacular Bid remains more hyperbole than fact, the gray can lay claim to the title of greatest horse denied a Triple Crown in the Belmont (G1).

It’s been 40 years since “The Bid” suffered a shock defeat in the third jewel, and the remainder of his Hall of Fame career only deepens the pang of the loss.

Spectacular Bid accordingly went off as the 3-5 favorite in the Kentucky Derby, and his superiority was on full display as he swept from off the pace to win by 2 3/4 lengths.

The Preakness (G1) was even easier for the 1-10 favorite. The Bid uncorked a similar move entering the far turn and drew off by 5 1/2 lengths.

The Belmont was expected to be a coronation. In the heady days after Secretariat (1973), and back-to-back Triple Crowns by Seattle Slew (1977) and Affirmed (1978), Spectacular Bid appeared on an inexorable march into their ranks. But as the old adage says, that’s why they run the race.

His 19-year-old jockey, Ronnie Franklin, who hadn’t given him the cleverest ride in the Florida Derby, made an error in judgment here. He got away with it at Gulfstream Park, and Delp kept faith in the teenager, whom he mentored on the way to an Eclipse Award as champion apprentice jockey.

The 1 1/2-mile Belmont, however, was unforgiving. Instead of timing his move well as he did in the Kentucky Derby and Preakness, Franklin had The Bid chase, and overtake, hopeless longshot Gallant Best early in the backstretch.

With Spectacular Bid asked to do too much, too soon, the more patiently ridden Coastal took advantage, and rolled past the laboring 1-5 favorite in the stretch. As an indicator that The Bid ran some way below his best, familiar foe Golden Act collared him for second. Never before had Golden Act finished ahead of him, and he never would again.

Delp revealed that his star colt had stepped on a safety pin that morning, and the last-minute mishap affected him in the race. If Spectacular Bid had thrown in a clunker, a lackluster effort with no visible excuse, perhaps the blame could be pinned on the stray safety pin. But the champion was handed an awfully difficult task of expending energy early to no purpose, and the tactics remain a far likelier explanation.

Ironically, Coastal was denying a Triple Crown 10 years after his own sire, Majestic Prince, had his attempt snuffed out. The difference in 1969, though, was that Majestic Prince’s loss to archrival Arts and Letters was not merely logical but foreseeable. Arts and Letters had been beaten narrowly in the first two jewels, and his stamina-laden pedigree entitled him to gain revenge in Belmont. Moreover, Majestic Prince’s trainer, John Longden (the Hall of Fame rider of 1943 Triple Crown legend Count Fleet), didn’t even want to run. Owner Frank McMahon overruled him. Majestic Prince was a hard-trying, if distant, second, and never raced again. Coastal would earn the Belmont laurel that eluded him.

In 1983, Coastal’s half-brother by Seattle Slew, Slew o’Gold, tried to emulate their Belmont success, but could not contain Caveat’s rally up the rail. In a further twist, Caveat himself had a pedigree link to The Bid. Caveat was by 1974 Derby winner Cannonade, who was in turn by Bold Bidder, the sire of Spectacular Bid.

The brutal loss for The Bid had worse ramifications for Franklin. He lost the mount to Hall of Famer Willie Shoemaker, and tragically descended into substance abuse that ultimately cost him his career as a jockey.

Spectacular Bid came back with a vengeance in a track record-setting Delaware Park allowance, his tune-up for another romp in the Marlboro Cup (G1). Aside from pummeling General Assembly again, he left Belmont nemesis Coastal well back in third. The classic winners met for a final time in the Jockey Club Gold Cup (G1). Although The Bid had the satisfaction of beating Coastal over the Belmont track and 1 1/2-mile trip, underscoring the painful “what might have been” from four months earlier, he could not peg back the year-older Triple Crown champion Affirmed.

Never again would Spectacular Bid taste defeat. Ending his sophomore season with the Meadowlands Cup (G2) in track-record time, he compiled a perfect 9-0 record at four, in a campaign for the ages.

Indeed, his accomplishments in 1980 assured The Bid of a place in racing’s pantheon. He blitzed through the Strub series at Santa Anita, smashing records along the way. After taking the seven-furlong Malibu (G2) in a track-record 1:20, he added the San Fernando (G2) and completed the sweep in the Charles H. Strub (G1) in a world-record 1:57 4/5 for 1 1/4 miles on dirt.

Spectacular Bid dominated the Santa Anita H. (G1) under 130 pounds, the Mervyn LeRoy (G2) under 132, and the Californian (G1), toting 130 while establishing a new Hollywood Park mark of 1:45 4/5 for 1 1/8 miles. The big gray was equally invincible carrying 130 pounds at Arlington Park, where he set a 1 1/8-mile track record in 1:46 1/5 in his 10-length Washington Park H. (G3) conquest. After lugging 132 pounds to victory over the great mare Glorious Song in the Amory L. Haskell (G1) at Monmouth, Spectacular Bid had literally no one left to face him in the Woodward (G1). He sailed around in splendid isolation at Belmont Park, enjoying a walkover in what turned out to be his swan song.

Retired with then-record earnings of $2,781,608, and a career mark of 26 wins, two seconds, and a third from 30 starts, Spectacular Bid was voted champion in all three years he raced, and bowed out as the 1980 Horse of the Year.

The Bid was enshrined in the Hall of Fame in 1982. He did not enjoy great success at stud and eventually relocated to upstate New York. Yet his name survives in pedigrees chiefly through his daughters, including Oil Fable, granddam of Bernardini; Victoria Cross, dam of European champion sprinter Mozart; and Whow, granddam of Any Given Saturday. And his sons Bite the Bullet and Spectacular Love carried his influence as far afield as Australia and New Zealand.

Spectacular Bid lived to the advanced age of 27, retaining his zest for the stallion’s life to the end. His end came on June 9, 2003 – 24 years, to the day, after a Belmont loss that still smacks of an injustice in the historical record.

Since 1979, a dozen Derby/Preakness winners failed in their Belmont quest (including the withdrawn I’ll Have Another) before American Pharoah (2015) and Justify (2018) completed the Triple Crown sweep. Now 40 years on, Spectacular Bid has not merely stood the test of time. The intervening years have only burnished his legacy as an all-time great who was worthy, if not lucky enough, to wear the Crown. 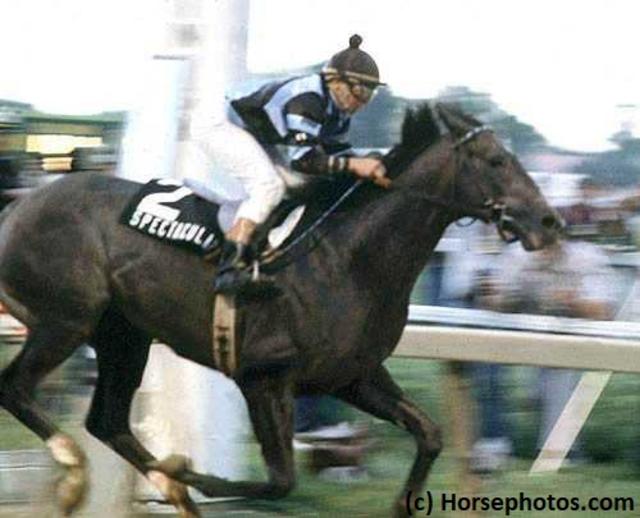