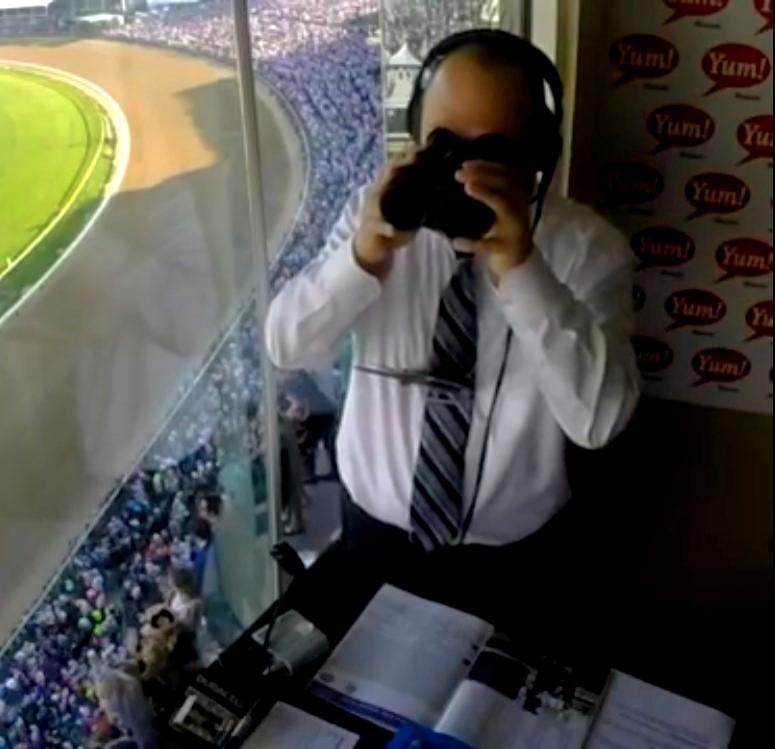 The whirlwind journey occurred in 2014.

“I literally went from Louisiana Downs to Monmouth Park to Aqueduct to Churchill Downs in less than the span of a year,” Travis Stone explained.

Stone, 33, was named track announcer at Churchill Downs in December 2014, becoming the eighth person to call races at the famed venue since 1940. Larry Collmus announces the Kentucky Derby for NBC’s audience, but Stone serves as the on-track caller for the 160,000+ people who attend the first leg of the American Triple Crown at Churchill Downs.

“My opening night on the mic at Churchill was literally a week before American Pharoah’s Derby and the crazy part is, I had never been to the Kentucky Derby,” Stone said. “The first Kentucky Derby I went to was the first one I was going to call.”

The track announcer is essentially a storyteller, describing the action as it takes place at a fast and furious pace below. Stone is located in a booth above the track on the finish line and his tools are simple: microphone, binoculars and hands-free program hanging below his neck.

He’s getting ready to call his third Kentucky Derby on May 6.

“Travis Stone is justly a rising star among the North American announcing ranks,” Churchill Downs Racetrack President Kevin Flanery said when Stone was hired. “To no one’s surprise, numerous race-callers with a wide range of talent and individual style showed interest in our vacant track announcer position. But it became clear to us that Travis’ passion for horse racing and charisma resonated through the microphone and made him the ideal fit for our team and racing at Churchill Downs.”

Originally from Schroon Lake in upstate New York, Stone brings an entertaining and descriptive style to race calls, building toward the crescendo of a thrilling finish when possible, and accuracy is of the utmost importance. That makes preparation key.

“For day-in, day-out racing, I go through the program in the morning and to make sure I have the pronunciations right,” Stone said. “The real work starts when they come on the track. I take markers and I color the silks into my program and then I memorize the horses’ names to those silks.

“I do the silks, memorize them and take a few minutes to chill out, relax. Then about 3 minutes to post or so, I go back through and make sure I have them all memorized. As the day wears on, that process takes a little longer because you’re getting tired. I can probably memorize 12 horses in about 2 ½-to-3 minutes.”

When Stone was trying to break into the business, he wrote letters to every track announcer he could. Tom Durkin, the most iconic figure in the industry who retired in 2014 after calling races for 43 years, including the Triple Crown and Breeders’ Cup, suggested a notebook to serve as a compass.

“I have a notebook where I write down phrases and things to say every day, thoughts, perspectives, ideas and concepts. Anything that could have value,” Stone noted. “I’ll give you an example, I’ve got a sheet from (famed hockey announcer) Doc Emrick, he’s wildly entertaining. Somebody once took all the phrases he used and put a list on the internet.

“So I put that list in my notebook because that’s sort of what I do as an announcer, and other announcers do, is try to come up with phrases and terms to use and I thought, ‘Maybe there’s something he said that I could twist a little bit. It’s a notebook of everything, I refer to that as well throughout the day to refresh the memory.”

Stone attended Saratoga Race Course with his parents as a kid and would emulate the track announcer after returning home, calling races with toys or anything at his disposal. He quickly realized his enthusiasm for it, practicing over and over again, and while attending college for Communications Arts in Oneonta, New York, the 18-year-old wrote every track within driving range asking for the chance to call a race.

The opportunity came at Suffolk Downs in the winter of 2004, with Stone and his dad driving more than four hours on a Tuesday to call a pair of live races. A few months after graduating college, he was hired as the track announcer at Louisiana Downs in 2006. He held the post for seven years, leaving to take over at Monmouth Park for its 2014 meet.

Before joining Churchill Downs, Stone was tabbed to call the inner track races at Aqueduct and he still works the winter meet in New York along with three sessions in Louisville, Kentucky (spring-summer, September and fall meets).

How does he prepare for the 2017 Kentucky Derby?

“Well, I watch all the prep races and sort of have an idea who the contenders are, but I strategically try to emotionally disconnect myself from these preps as a race caller. I can’t be a fan during a race I’m calling,” Stone noted. “Everybody has to have their Derby horse but I don’t want a Derby horse, I have to sort of like all 20 of them.

“I watch everything from the perspective of a race caller, like J Boys Echo. I called his Gotham win (at Aqueduct) and I don’t necessarily know whether he’s good enough to win the Kentucky Derby but I do know he’s a big closer and come Derby Day, I have to keep an eye out for him in the final half-mile.”

Stone said that once the final round of prep races are over, he starts making flash cards to memorize jockey silks for the Kentucky Derby.

“I have the silks memorized two weeks out. I put the flash cards next to the bed, I’ll flip through them before I go to bed and when I wake up. Derby week I go to the track in the mornings, every couple of races during the afternoon I’ll pull them out and review them.

“I also find pictures of each contender and have them printed at Walgreens on photo paper, just for key markings and just to get a sense of how horses look. Whether they are a lighter chestnut or not, stuff like that.”

The Kentucky Derby features up to 20 starters but many more are under consideration in the preceding months. And Stone spends countless hours scouting horses.

“The more you prepare and think of things to say, you just commit them to memory, the more likely your subconscious is going to grab them at the moment,” Stone explained. “I’ll give you an example, in my first Derby, Frosted was a horse coming off a big win and one of the favorites and I was preparing on him and trying to think, ‘What are some ways to describe Frosted?’

“And I realized, Frosted’s kind of a funny word, freezing or cold or something like that, and I thought if he starts making a move, I can say something like ‘Frosted is warming up.’ And on the far turn I actually said that.

“On the far turn, I also said ‘Dortmund is digging down’ and ‘Firing Line is firing,’ those were lines I had written down before the race, things to say if the opportunity presented itself.”

America’s most famous race, the Kentucky Derby features an enormous build-up and it’s over in approximately two minutes.

“A couple of moments I was proud of, when they were loading into the gate, I think one of the coolest moments of the Derby is when there are about two horses left to load, everybody is on their feet,” Stone said. “So each year I’ve come up with a different way of describing what’s about to happen.

Does he ever come up stuff on the fly?

“I want to say never come up with stuff on the fly because your brain’s working so fast sometimes what comes out is not what you intended. But it happens.”

Does he feel the nerves?

“Yeah, no doubt about it. In fact, the entire week there’s a little bit of on-edginess to everything. Like any racing fan, before they break the gates it’s a very exciting moment for me and it’s really intense when you’re calling it.”

What has he learned from his two years as the Kentucky Derby announcer?

“Year number 1, everything I did to stay calm I wrote down and then I reapplied it to year number 2 and tweaked a couple of things. So I’ve got a game plan, or I guess you could call it a strategy for Derby Day to make the most out of the day and keep the adrenalin as low as possible.

“There’s nothing more intense than when the last horse is loading in and it’s like, ‘Oh man, it’s time to do it.’

“And then, the first few strides are hectic and on the first turn, it’s very nerve-wracking because you’re trying to get through all 20, but once you get to the backstretch it settles down a little bit, you’re in the zone, so to speak, and you just call a horse race from there.”

What are the biggest challenges he’s experienced calling the Kentucky Derby?

“Last year, remember there was My Man Sam and Exaggerator. When they came on the track, their silks looked exactly alike even though Exaggerator was supposed to be a darker green and My Man Sam more of a teal. In the sunlight, they looked dead similar. And on the far turn, Exaggerator was making a move and I knew it was Exaggerator because Kent Desormeaux has a very distinctive riding style and I recognized it.

“So whatever markings or indicators can help you to be on top of it.”

“Subconsciously it’s there but you can’t rely on it because you’re far more likely to see silks than saddlecloths. You can see a jockey’s arm but if a horse is blocked by another horse, you can’t see any part of the saddlecloth.”

What advice can you share with aspiring track announcers?

“I used to ask people all the time what to do and I’m a firm believer that the first thing you have to do is call a lot of races, even if it means calling the cars on the highway, calling the races off TV or YouTube videos. Whatever it takes, just call races and get a sense for all of that. And start to network and meet people and continually work to improve your craft. Because that’s the key part, calling as many races as possible.

“It’s sort of like Malcolm Gladwell’s 10,000 Hour Rule, 10,000 hours of practice makes you an expert at something. The more races you call, the better off you’ll be in the long run.”

For more from the ever-engaging Stone, check out @TravisStone on Twitter 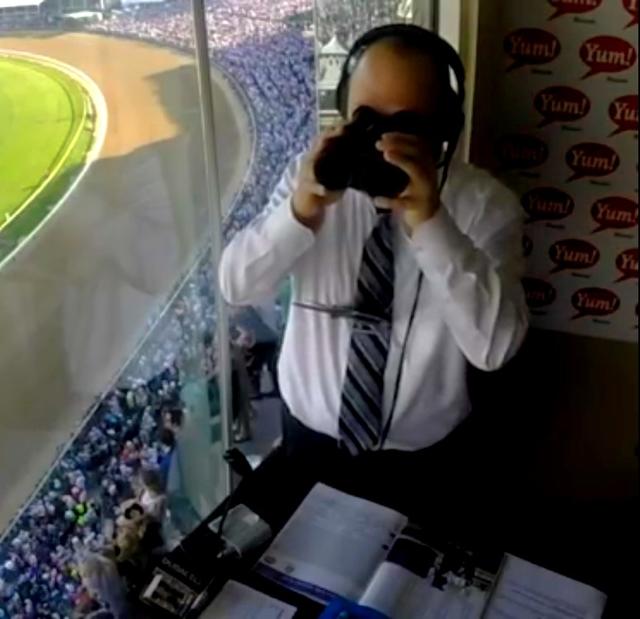