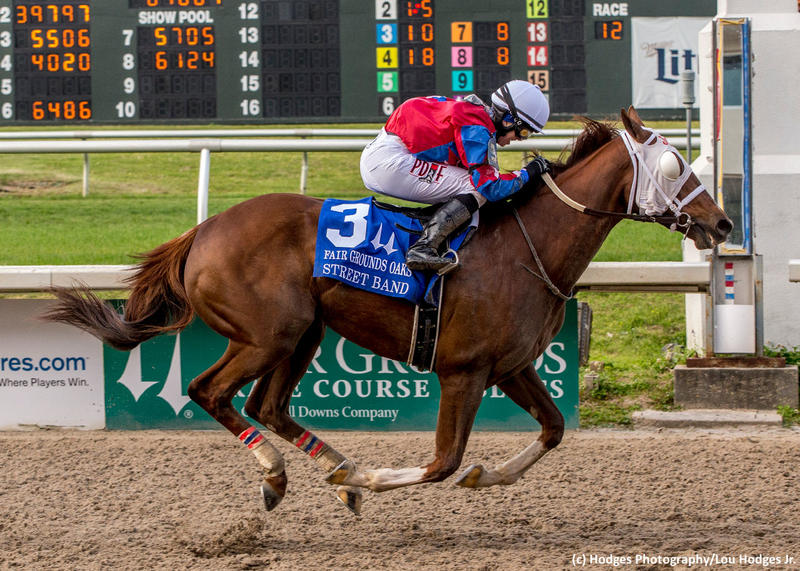 The February 16 Rachel Alexandra S. (G2) figured to serve as the key to Saturday’s $392,000 TwinSpires.com Fair Grounds Oaks (G2), but the form of that prep was turned upside down. Street Band, a well-beaten fourth in the Rachel Alexandra, ran the race of her life to spring a 10-1 upset.

A homebred campaigned by trainer Larry Jones and his wife, Cindy, in partnership with Ray Francis, Street Band leapfrogged to the top of the Kentucky Oaks (G1) leaderboard with this 100-point windfall. She has a total of 105, including her 5 points from the Rachel Alexandra.

Then Street Band began to gain momentum the farther they went down the stretch, rolled past a tiring Liora, and won going away by 3 3/4 lengths. Well handled by jockey Sophie Doyle, she negotiated 1 1/16 miles in 1:44.54 and paid $23.80 to win.

Liora held second, adding 40 points to her account, and now ranks second on the Oaks leaderboard with 71. A further two lengths back in third came Sweet Diane, who banked 20 points to up her total to 22. Eres Tu finished fourth, good for 10 points, and now sports 24 overall.

Next came Speedette; Slewgoodtobetrue; and the tailed-off Serengeti Empress, who was vanned off and found to have bled. Her trainer, Tom Amoss, reported that Serengeti Empress was “fine and comfortable” back at the barn. Crescentcitypretty was scratched.

Street Band’s first career stakes victory advanced her record to 8-3-0-2 with $310,325 in earnings. She broke her maiden second time out last summer at Ellis Park, and needed four tries to capture an allowance at Fair Grounds, before tackling stakes company in the Rachel Alexandra.

Now the improving Street Band will try to give Jones his fourth Kentucky Oaks trophy, following Proud Spell (2008), Believe You Can (2012), and Lovely Maria (2015). 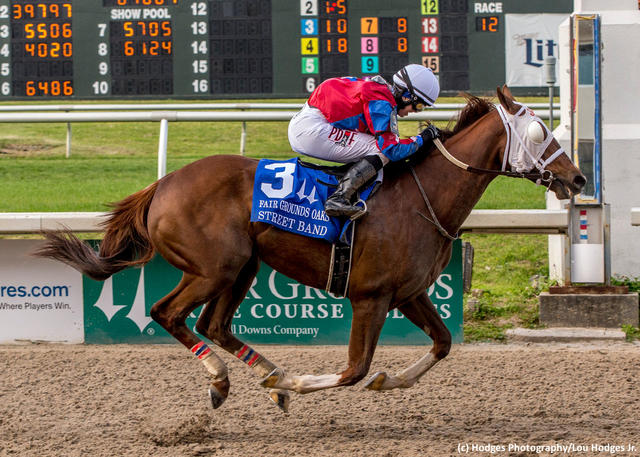