The Road to the Kentucky Oaks continues on Friday with the $2 million Breeders' Cup Juvenile Fillies (G1) at Keeneland. In addition to awarding Kentucky Oaks qualification points on a 20-8-4-2 basis to the top four finishers, the prestigious 1 1/16-mile race typically crowns the champion 2-year-old filly of the year.

This speedy filly has displayed impressive versatility, winning on both dirt and turf while compiling an unblemished 3-for-3 record. She was particularly eye-catching in the Alcibiades (G1) over the same track and distance as the Breeders' Cup Juvenile Fillies, leading all the way to crush her stakes-winning stablemate Crazy Beautiful by 6 1/4 lengths. In terms of Brisnet Speed ratings, Simply Ravishing is the fastest filly in the field, so they'll have to catch her to beat her.

A daughter of 2016 Kentucky Derby (G1) winner Nyquist, Vequist looked like a star in the making when dominating Saratoga's 7-furlong Spinaway (G1) by 9 1/2 lengths. But the pace-tracking filly faltered slightly when stretching out over a mile for the Frizette (G1) at Belmont Park, finishing second by two lengths against Dayoutoftheoffice. Vequist didn't run a bad race by any means, pulling 10 1/4 lengths clear of the rest. But the Breeders' Cup Juvenile Fillies will mark Vequist's debut in a two-turn race, and it's fair to wonder if shorter distances might be her true forte.

A daughter of leading sire Into Mischief, Dayoutoftheoffice is unbeaten and essentially unchallenged in three starts. After winning her debut at Gulfstream Park by 4 3/4 lengths, Dayoutoftheoffice romped by six lengths in Saratoga's Schuylerville (G3) and defeated Vequist by two lengths in the Frizette (G1). This impressive resume has stamped Dayoutoftheoffice as a logical contender to win the Breeders' Cup Juvenile Fillies, though stretching out around two turns is a new experience she'll have to conquer.

A stoutly-bred daughter of Tapit out of a Seeking the Gold mare, Thoughtfully is bred to thrive running a mile or farther, so when she dominated her first two starts sprinting—including the Adirondack (G2) at Saratoga—it was easy to believe she could be a star in the making. But Thoughtfully failed to bring her A-game when stretching out over 1 1/16 miles in the Alcibiades, weakening steadily to finish a dozen lengths behind Simply Ravishing. Was Thoughtfully's poor effort a fluke? Or is she overmatched against this caliber of competition? Suffice to say, this $950,000 yearling acquisition looms as a wildcard in the Breeders' Cup Juvenile Fillies.

Granted, Girl Daddy has yet to compete in a Grade 1 race, or even a two-turn race for that matter. But this $500,000 yearling has made a powerful impression in her first two starts, romping to victory on debut at Ellis Park before rallying into the teeth of a hot pace to win the 1-mile Pocahontas (G3) at Churchill Downs by two lengths over Crazy Beautiful. Girl Daddy continues to train forwardly and is bred to handle 1 1/16 miles, so she can factor at a fair price with one more step forward.

The second Kenny McPeek trainee opened her career with two easy victories, including a triumph in the 7-furlong Debutante S. at Ellis Park. But a traffic-filled trip saw Crazy Beautiful finish second behind Girl Daddy in the Pocahontas (G3), and even with a clean journey in the Alcibiades (G1), Crazy Beautiful was no match for stablemate Simply Ravishing. A top-four finisher is certainly within reach for Crazy Beautiful, particularly if one of the favorites falters, but she'll need improvement to fight for first place.

Undefeated in three starts for Hall of Fame trainer Bob Baffert, Princess Noor has yet to be remotely challenged, dominating the Del Mar Debutante (G1) by 6 1/2 lengths and the Chandelier (G2) by 8 1/4 lengths without ever being asked for her best run. A daughter of 2016 Breeders' Cup Juvenile (G1) runner-up Not This Time, Princess Noor sold for $1.35 million earlier this year and clearly has a world of talent. But in terms of Brisnet Speed ratings, Princess Noor isn't the fastest horse in the Juvenile Fillies field, and she may need to unveil another gear to keep her unbeaten record intact. 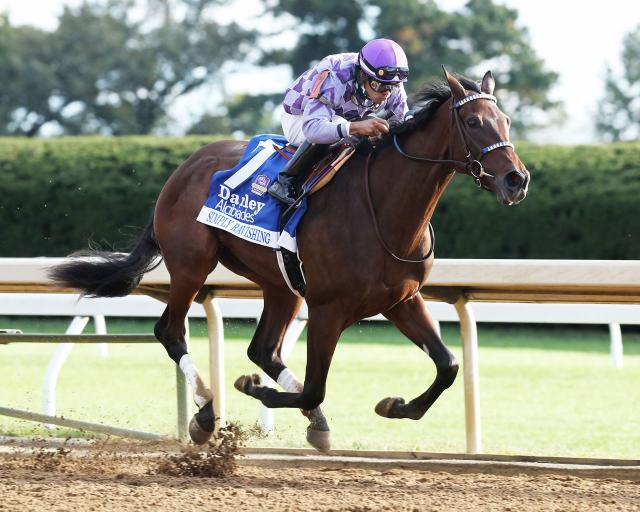