The Churchill Downs fall meet continues on Saturday with the $100,000 Chilukki (G3). Held over a mile on the main track, the competitive race has drawn eight fillies and mares, including former Road to the Kentucky Oaks standout Finite.

New Roo has shown flashes of significant talent on dirt, most notably dominating a 1-mile allowance race at Ellis Park by 12 3/4 lengths. This blowout victory produced a 99 Brisnet Speed rating, tied for the highest figure in the Chilukki field. But New Roo has largely struggled in her previous stakes attempts and enters the Chilukki off a fifth-place effort in a 1-mile allowance event at Churchill Downs, suggesting a spot on the board might be the ceiling for New Roo's potential.

Easily the most accomplished runner in the Chilukki field, Finite rattled off four consecutive stakes victories last fall and winter, including triumphs in the Rags to Riches S. and Golden Rod (G2) at Churchill Downs. The daughter of Munnings was among the favorites for the 2021 Kentucky Oaks (G1) until a minor injury derailed her summer campaign. On the bright side, Finite has bounced back strong, with a narrow runner-up effort in Keeneland's 7-furlong Raven Run (G2) an effort that should serve as a perfect prep for the Chilukki. Finite will be facing older rivals for the first time, but stretching back out over a mile and returning to Churchill Downs should make her dangerous with hot jockey Ricardo Santana aboard.

With just four starts under her belt, Grand Cru Classe still has lots of upside and room for improvement. Victorious in her first three starts for Hall of Fame trainer Bill Mott, including the 1 1/16-mile Weber City Miss S. at Laurel Park, Grand Cru Classe performed admirably when jumping up in class for the 7-furlong Raven Run (G2) at Keeneland. After tracking a steady early pace, Grand Cru Classe fought on gamely to finish third, just half a length behind Finite. Stretching back out in distance should only help this stoutly-bred daughter of Preakness (G1) winner Bernardini, and she figures to sit a perfect stalking trip under high-percentage jockey Tyler Gaffalione.

Never out of the trifecta in four starts over the Churchill Downs oval, Whoa Nellie really came to hand during the winter at Oaklawn Park, dominating the 1-mile Pippin S. by 4 1/2 lengths before finishing second by a neck while favored in the 1 1/16-mile Bayakoa (G3). The daughter of Kentucky Derby (G1) winner Orb hasn't run since Feb. 17, but she's been working strongly for her return, and trainer Larry Jones wins at a lofty 32% rate with runners beaten as the favorite in their previous start. If Whoa Nellie brings her A-game off the long layoff, she can fight for a top-three finish.

Following a productive 3-year-old campaign highlighted by placing in the Remington Park Oaks (G3) and Comely (G3), Gold Standard has largely struggled as a 4-year-old, with a last-place effort in the Bayakoa (G3), prompting an extended layoff. But she showed signs of returning to form when rallying to victory in a 1-mile allowance race on Oct. 31 at Churchill Downs, her first victory in more than a year. Trainer Brad Cox and Florent Geroux have been hot at Churchill, winning at a 27% rate together, so Gold Standard has an outside chance to factor at a fair price.

The fastest filly in the field with a pair of 99 Brisnet Speed ratings to her credit, Risky Mandate was an impressive allowance winner at Keeneland last month, leading all the way to dominate the 7-furlong event by 2 3/4 lengths. A top-three finisher in seven of her eight starts, Risky Mandate's only off-the-board effort came against elite competition in the La Troienne (G1), when she broke slowly and rushed up to track a fast pace before weakening around the far turn. She'll face easier competition in the Chilukki and has been training up a storm, suggesting Risky Mandate has a chance to spring a gate-to-wire surprise.

With 11 wins from 23 starts, Crazy Sexy Munny has been a winning machine against less formidable competition. But although the former claimer was an easy allowance winner racing a mile at Churchill two starts back, she's stepping up significantly in class for the Chilukki and brings modest Brisnet Speed ratings to the equation, suggesting Crazy Sexy Munny will be a longshot to finish on the board.

Runner-up in the 6-furlong McConnell Springs S. at Keeneland two weeks ago, Unique Factor has posted six consecutive Brisnet Speed ratings in the 91-98 range, stamping her as one of the fastest fillies in the Chilukki field. But the 4-year-old filly is bred for speed and has been sprinting as of late, so although she's won over a mile in the past, stretching out in distance (while simultaneously stepping up in class) could be a question mark for Unique Factor.

A Group 1 winner in her native Chile, Sanenus has finished third in her first two U.S. starts for high-percentage trainer Michael McCarthy. She's squared off against some quality rivals, and she arguably moved too soon into a hot pace when beaten 1 3/4 lengths in a Churchill Downs allowance race on Sept. 26. But with a career-best 89 Brisnet Speed rating to her credit, Sanenus will need improvement to challenge in the Chilukki. 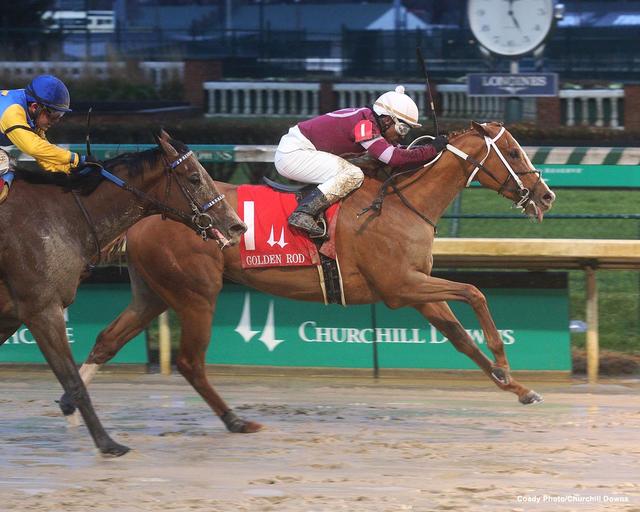