Graded stakes action returns to the Churchill Downs fall meet with the $200,000 Mrs. Revere (G2), a 1 1/16-mile grass race slated to take place on Saturday. The race has drawn a small but competitive field of seven 3-year-old fillies.

The second daughter of Uncle Mo entered in the Mrs. Revere field, Positive Danger is 2-for-2 racing 1 1/16 miles on turf, posting gate-to-wire wins in an Arlington Park maiden race and an Indiana Grand allowance event. As the lone front-runner on paper, Positive Danger has an opportunity to shake loose on an easy lead and take this field a long way on the front end. But with a career-best 82 Brisnet Speed rating to her credit, Positive Danger will need improvement to factor at the finish.

A powerful stretch runner trained by Mike Maker, Stunning Sky is the most accomplished filly in the Mrs. Revere field by virtue of a late-running victory in the 1 1/16-mile Valley View (G3) on Oct. 16 at Keeneland. A competitor in eight straight stakes races, Stunning Sky also boasts runner-up efforts in the Lake Placid (G2) and Saratoga Oaks on her impressive resume. She's knocked heads with stakes winner Micheline and Harvey's Lil Goil this season, so we know Stunning Sky has the form lines to compete at this level. She'll also retain the services of jockey Ricardo Santana, a 30% winner when teaming up with Maker. If there's one chink in Stunning Sky's armor, it's the fact she received a quick pace to work with in the Valley View and may not enjoy the same perfect setup on Saturday.

A confident winner of her first two starts against maiden and allowance company, Princess Grace ran a big race when stepping up in class for the Valley View (G3), seizing command in the stretch before settling for second place behind Stunning Sky. The daughter of Breeders' Cup Mile (G1) winner Karakontie arguably moved too soon into a hot pace, so if new jockey Florent Geroux can work out a more relaxed journey in the Mrs. Revere, Princess Grace can potentially turn the tables on her Valley View conqueror.

The field's most experienced runner with a dozen runs under her belt, How Ironic took a meaningful step forward in the Valley View (G3), charging hard down the lane to finish third by a length against Stunning Sky and Princess Grace. But the daughter of Tonalist benefited from a fast pace and failed to crack the trifecta in her five previous stakes attempts, suggesting a slower tempo in the Mrs. Revere could compromise How Ironic's chances.

Although Pass the Plate could only finish seventh behind Hendy Woods in the Indiana Grand S., she may have been compromised by racing over yielding turf. The Silverton Hill homebred had previously finished a close fourth in the 1 1/8-mile Regret (G3) at Churchill Downs, beaten just 2 1/2 lengths by Harvey's Lil Goil. Placed three times against stakes company, Pass the Plate recently cruised to victory by 2 1/2 lengths in a slow-paced dirt allowance race at Keeneland. Returning to turf should suit Pass the Plate just fine, placing her in the hunt for a top-four finish.

Without question, Witez is one of the most difficult Mrs. Revere participants to analyze. The daughter of More Than Ready has shown flashes of significant talent against graded stakes company, finishing second in the Jessamine (G2) and third in the Lake George (G3). But Witez also finished behind many of her Mrs. Revere rivals when coming home 12th in the Regret (G3) and fourth in the Valley View (G3). When she brings her A-game, Witez has the ability to factor against this caliber of competition. It's predicting when she'll run well—and when she'll misfire—that makes her hard to trust. 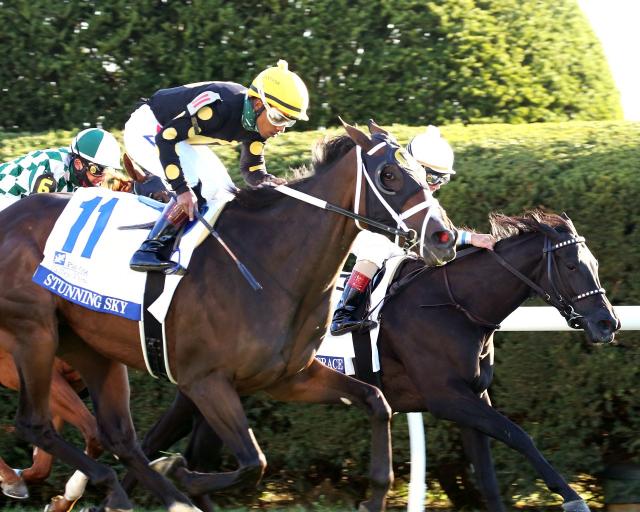