The $100,000 John Battaglia Memorial at Turfway Park has long served as a local steppingstone toward the Jeff Ruby Steaks (G3), Turfway's signature race. But Friday's renewal of the John Battaglia is the most significant to date—for the first time, the 1 1/16-mile race serves as a Road to the Kentucky Derby prep event awarding qualification points to the top four finishers on a 10-4-2-1 basis.

An experienced runner with eight starts under his belt, The Predicament required seven starts to break his maiden, finally doing so in a six-furlong sprint at Turfway. The consistent gelding has never finished out of the trifecta, but his most recent effort—a runner-up finish in a six-furlong allowance race at Turfway—suggests he'll need improvement to keep his streak alive in the John Battaglia.

Speed is the name of the game for Twirling Mamba, who hails from the high-percentage barn of trainer John Ortiz. The son of Twirling Candy clearly relished the Turfway Tapeta in a six-furlong allowance race on Jan. 23, tracking a fast pace before charging clear to beat The Predicament by 2 1/4 lengths. But Twirling Mamba has never run farther than seven furlongs, and with a career-best 82 Brisnet Speed rating under his belt, he'll need a step forward to vie for victory against tougher company on Friday.

Leading trainer Wesley Ward has won at a 33% rate at Turfway since the beginning of 2021, stamping Like the King as a contender to fear in the John Battaglia. A 7 1/2-length maiden winner racing a mile on turf, Like the King thrived when switching to Tapeta for a Dec. 4 allowance race at Turfway, leading all the way to win the one-mile heat by 3 1/2 easy lengths. This eye-catching victory produced a 91 Brisnet Speed rating (the second-highest figure in Friday's field), so don't be surprised if Like the King posts another gate-to-wire win in the John Battaglia.

Fair Grounds maiden winner Kinetic Sky has already faced some quality rivals, coming home third behind future Risen Star (G2) runner-up Proxy in a Nov. 26 maiden heat. But the son of Runhappy has never run on synthetic and brings a career-best 82 Brisnet Speed rating to the mix, suggesting the John Battaglia will be a tougher test than usual for Kinetic Sky.

As a son of Curlin out of a Bernardini mare, Pico d'Oro is bred top and bottom to thrive over classic distances. So it's a bit surprising to note that Pico d'Oro boasts a 2-0-0-0 record running long and a 6-2-1-1 record sprinting, with the latter resume highlighted by a stretch-running victory in the Juvenile S. at Ellis Park. On the bright side, Pico d'Oro is already proven at Turfway, flashing more tactical speed than usual to win a six-furlong allowance sprint in December. But the 1 1/16-mile distance of the John Battaglia might prove to be out of Pico d'Oro's reach.

After displaying only so-so form on turf and dirt, Hard Rye Guy took a big step forward when switching to Tapeta at Turfway. A rallying maiden win racing one mile was followed by a close runner-up effort in an allowance race over the same distance. The son of Hard Spun is progressing in the right direction, though his Brisnet Speed ratings suggest a top-four finish might be the ceiling for his potential against tougher competition in the John Battaglia.

Hush of a Storm

Unbeaten in two starts over the Turfway Tapeta, Hush a Storm is a mid-pack closer with eye-catching acceleration. After dominating a one-mile maiden race by 5 1/2 lengths, Hush of a Storm jumped up in class for a one-mile allowance race and rallied tenaciously to beat Hard Rye Guy by three-quarters of a length. Hush of a Storm's proven affinity for the local course is a positive, and trainer Bill Morey has been hot at Turfway this winter, winning at a lofty 29% rate. Ignore this improving youngster at your own risk.

Although Fort Moultrie failed to fire in his debut racing one mile at Turfway, the son of Mosler improved tremendously in his second start, rallying from a few lengths off the pace to narrowly win a 1 1/16-mile maiden race. By holding off Bakwena through the drive, Fort Moultrie posted a sharp 89 Brisnet Speed rating, suggesting one more small step forward could put him in the hunt for victory on Friday.

A son of 2007 Kentucky Derby winner Street Sense, Notable Exception has failed to challenge in his last two starts on dirt, including a distant defeat in the American Pharoah (G1). But the Calumet Farm homebred has been freshened since October and posted a romping 5 1/4-length victory in his debut over the synthetic Polytrack at Arlington Park, suggesting a switch to Tapeta for the John Battaglia will be right in his wheelhouse. Now Notable Exception just needs improvement on the speed figure scales—his career-best 77 Brisnet Speed rating leaves him with a lot of ground to make up.

Winner of the Laurel Futurity racing 1 1/16 miles over yielding turf last fall, Catman has shown a variety of running styles while competing at six different tracks in as many starts. But the son of Kitten's Joy hasn't seriously factored in his last three runs (all against stakes company), so bettors will have to hope the switch to Tapeta reawakens Catman's competitive spirit.

Warrior in Chief lost his first two starts sprinting, but relished the chance to stretch out over 1 1/16 miles in his third run, employing pace-pressing tactics to narrowly win over 1 1/16 miles at Churchill Downs. Trainer Kenny McPeek has been hot at Turfway this winter, winning at a 24% rate, and Warrior in Chief's career-best 88 Brisnet Speed rating stamps him as a contender. Butt he son of Kantharos has never run on synthetic, a meaningful question mark in this field of proven Tapeta performers.

With a maximum field of 12 allowed to start in the John Battaglia, Bakwena has been placed on the also-eligible list as #13. That's understandable since the son of Graydar has yet to win in three starts, though he did take a notable step forward in his most recent effort, rallying to finish second by a head against Fort Moultrie. Bakwena isn't overmatched from a Brisnet Speed rating perspective, so If a scratch from the main body of the field allows him to start, Bakwena's pure late-running style could potentially land him a top-four finish at huge odds. 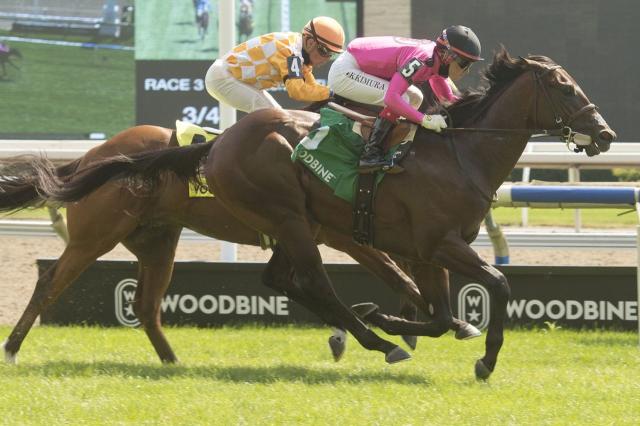