Kentucky Derby (G1) alumni Helium and O Besos will square off against a bevy of promising newcomers in Saturday's $150,000 Matt Winn (G3) at Churchill Downs. The 1 1/16-mile race provides an opportunity for talented three-year-olds to get an early start on the summer racing season, and recent winners include Horse of the Year Gun Runner and Grade 1 winner Maxfield.

After finishing fourth in his debut sprinting on turf at Fair Grounds, Ready to Pounce took a big step forward when stretching out over one mile on dirt at Keeneland. After settling a few lengths off the early pace, Ready to Pounce parlayed a ground-saving trip into a confident 4 3/4-length maiden victory. The 90 Brisnet Speed rating he received is encouraging, and Ready to Pounce figures to receive another inside journey while breaking from the rail under jockey Brian Hernandez. He has every chance to factor at a fair price.

The stretch-running Tampa Bay Derby (G2) winner showed tactical speed when finishing a deceptively good eighth in the Kentucky Derby. The Mark Casse trainee was only beaten 10 1/2 lengths in his first start off a two-month break, and he's eligible to take a step forward while wheeling back four weeks later and dropping down in distance. As the most accomplished runner in the field, Helium warrants respect, and the versatility he's displayed in terms of running style affords him options for securing an ideal trip. A top-three finish is well within reach.

Some folks might dismiss O Besos' respectable fifth-place finish in the Kentucky Derby as a fluke, considering he started at 41-1 and seemingly just passed tired rivals to secure the final share of the purse. But the finishing fractions of the Kentucky Derby were quick, so O Besos' stretch-running effort was legitimately good. Furthermore, he had previously rallied to finish third in the Louisiana Derby (G2), beaten only by Kentucky Derby third-place finisher Hot Rod Charlie and Preakness (G1) runner-up Midnight Bourbon. As a deep closer, O Besos may find himself at the mercy of the pace in the Matt Winn, but he comes in as the fastest horse on paper and will be tough to beat if he brings his A-game.

A son of 2010 Kentucky Derby winner Super Saver, Southern Passage is the most experienced runner in the Matt Winn field with 11 starts under his belt. He's been most productive at Churchill Downs, going 5-1-1-1, but his lone victory came in a $50,000 maiden claiming race, and his career-best 86 Brisnet Speed rating is a little light. Trainer Dale Romans has won the Matt Winn three times, but Southern Passage will need improvement to challenge on Saturday.

After compiling a 1-for-4 record on turf, Fulsome switched to dirt during the spring and promptly rattled off back-to-back victories for hot trainer Brad Cox. After dominating a 1 1/16-mile allowance race at Keeneland (beating next-out winner Ethical Judgment by 3 1/2 lengths), Fulsome stretched out over 1 1/8 miles at Oaklawn Park, where he rallied with determination to win the Oaklawn S. by 1 1/4 lengths. The 105 Brisnet Late Pace rating Fulsome received is the highest in the Matt Winn field, and hot jockey Florent Geroux (a 24% winner at Churchill Downs this spring) is picking up the mount. Any way you slice it, Fulsome has the credentials to challenge for victory.

A pacesetting winner of the seven-furlong Jimmy Winkfield S. at Aqueduct, Hello Hot Rod failed to flash his typical early speed when rallying mildly to finish fourth in the April 24 Federico Tesio S. at Pimlico, beaten 3 3/4 lengths. Perhaps the dark bay colt was a little rusty while returning from a three-month layoff, but it's also possible the 1 1/8-mile distance of the Federico Tesio was longer than he prefers. Sticking to a two-turn route configuration in the Matt Winn is a question mark for Hello Hot Rod, who also comes in a little light from a Brisnet Speed rating perspective.

The second Romans trainee showed a ton of promise last summer, dominating his debut at Ellis Park before rallying to an explosive victory in Churchill's Iroquois (G3). In the latter race, Sittin On Go defeated a deep field led by future Preakness runner-up Midnight Bourbon and Arkansas Derby (G1) winner Super Stock. But Sittin On Go hasn't finished better than fifth in half a dozen subsequent starts, even when receiving a perfect pace setup in the Pat Day Mile (G2) over the same track and one-mile distance as the Iroquois. Barring a form turnaround, Sittin On Go figures to find the waters a bit deep in the Matt Winn.

Winner of the seven-furlong Clever Trevor S. as a juvenile, Game Day Play has done his best work sprinting. He didn't run poorly by any means when finishing third in the 1 1/8-mile Oaklawn S. four weeks ago, but Game Day Play was nevertheless weakening through the final furlong after tracking a modest pace. Game Day Play has the talent to compete at the stakes level, but the 1 1/16-mile distance of the Matt Winn might be farther than he prefers. 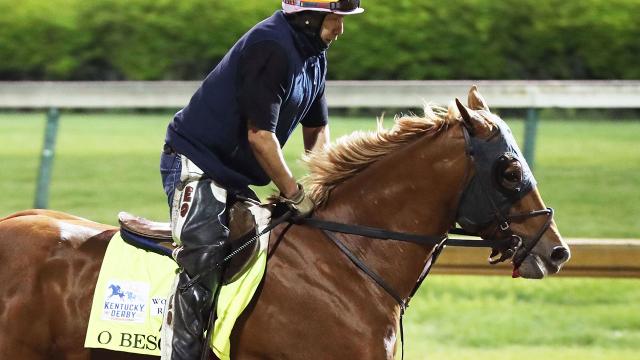