The Triple Crown continues on Saturday at Pimlico with the 146th running of the $1 million Preakness (G1). The 1 3/16-mile classic has drawn a competitive field of 10, including Kentucky Derby (G1) starters Medina Spirit, Midnight Bourbon, and Keepmeinmind.

The most experienced of the Preakness entrants with nine starts under his belt, Ram has made impressive progress in recent weeks for six-time Preakness-winning trainer D. Wayne Lukas. After breaking his maiden in a $50,000 maiden claiming race, Ram stepped up and capitalized on a fast pace to win a one-mile allowance event at Churchill Downs on Kentucky Derby day. The big question now is whether Ram has the speed to compete against Grade 1 competition; he's never run in a stakes, and his career-best 88 Brisnet Speed rating looks a little light compared to his rivals.

A pure deep closer, Keepmeinmind was an accomplished juvenile, winning the Kentucky Jockey Club (G2) after placing in the Breeders' Cup Juvenile (G1) and Breeders' Futurity (G1). But the son of Laoban hasn't really stepped forward in 2021, with a seventh-place finish in the Kentucky Derby arguably ranking as his best effort so far this season. A pace meltdown would be beneficial for Keepmeinmind, giving him a chance to pick off tiring rivals down the homestretch.

Medina Spirit fired off a career-best effort in the Kentucky Derby, leading all the way and turning back multiple challenges to cross the wire half a length in front. The son of Protonico earned an eye-catching 101 Brisnet Speed rating and looms as the horse to beat at Pimlico for trainer Bob Baffert, who has won the Preakness a record seven times. Medina Spirit is 3-for-3 when setting the pace or dueling for the lead, so expect the son of Protonico to employ front-running tactics again while breaking from post 3. All signs suggest Medina Spirit will be tough to beat on Saturday.

An Aqueduct maiden winner entering the Preakness off a runner-up effort in the Gotham (G3) and a third-place finish in the Wood Memorial (G2), remarkably, Crowded Trade's career record has been identical to that of Cloud Computing, who gave trainer Chad Brown and jockey Javier Castellano an upset victory in the 2017 Preakness. Can lightning strike twice with Crowded Trade? The chestnut colt brings competitive Brisnet Speed ratings to the table and was only beaten 1 1/4 lengths in the Wood Memorial after dropping farther off the pace than expected. Don't count this lightly raced prospect out of the mix.

A troubled start left Midnight Bourbon rallying from midpack in the Kentucky Derby, an unfamiliar position for the typically speedy colt. But Midnight Bourbon never gave up, overcoming a wide journey to rally and finish sixth. The son of Tiznow had previously wired the Lecomte (G3) and employed pace-pressing tactics to place in the Louisiana Derby (G2) and Risen Star (G2), so don't be surprised if he shows more speed in the Preakness. So long as Midnight Bourbon breaks alertly, he can work out a clean trip pressing or stalking Medina Spirit and hang around for a top-four finish.

Runner-up in the American Pharoah (G1) as a juvenile, Rombauer has taken a step forward at the age of three. The versatile colt kicked off the year with a late-rallying victory in the El Camino Real Derby before employing pace-tracking tactics to finish third in a strong renewal of the Blue Grass (G2). Rombauer has been posting fast workouts at Santa Anita and is eligible to take another step forward in his third start of the season, suggesting a top-four finish at high odds isn't out of the question.

One of the trickiest horses to analyze is France Go de Ina, an international raider. The son of 2013 Preakness alumnus Will Take Charge showed speed when dominating maiden and allowance races in Japan, though slow pace fractions made it easier for France Go de Ina to race prominently. Bettors could have gotten a better line on France Go de Ina's form when he stepped up in class for the UAE Derby (G2) in Dubai, but unfortunately, France Go de Ina suffered a slow start and had to rally through traffic to finish sixth. There's no telling how he stacks up against his Preakness rivals, but France Go de Ina is eligible to improve with a clean start in the Preakness, so don't count this globetrotting longshot out of the mix.

Unbridled Honor is the perfect example of a "pick up the pieces" racehorse. He doesn't have tactical speed, but he's good at rallying from far behind to pass tiring rivals and finish on the board. Indeed, he's finished fourth or better in four of his five starts, most recently when second by 2 3/4 lengths in the Lexington (G3). But Unbridled Honor did benefit from a pace meltdown in the Lexington, so there's no guarantee he'll reproduce the effort if a more controlled tempo unfolds in the Preakness.

Risk Taking was on quite a roll during the winter at Aqueduct, breaking his maiden over 1 1/8 miles before dominating the Withers (G3) over the same distance by 3 3/4 lengths. But the stretch-running son of Medaglia d'Oro failed to produce his late kick in the Wood Memorial, coming home seventh as the favorite. If you're willing to forgive this disappointing effort, Risk Taking has the potential to bounce back for Preakness-winning trainer Chad Brown. The 1 3/16-mile distance of the Preakness should be right up his alley.

Medina Spirit's accomplished stablemate has shown versatility in terms of running style. He won the Rebel (G2) in gate-to-wire fashion, but employed tracking tactics to prevail in the San Vicente (G2). Concert Tour suffered his first defeat when finishing third as the 3-10 favorite in the Arkansas Derby (G1), which prompted trainer Bob Baffert to remove the colt from Kentucky Derby consideration. But Concert Tour has bounced back with three encouraging workouts and looms as Medina Spirit's most formidable opponent on paper. He just needs to avoid getting hung too wide from post 10. 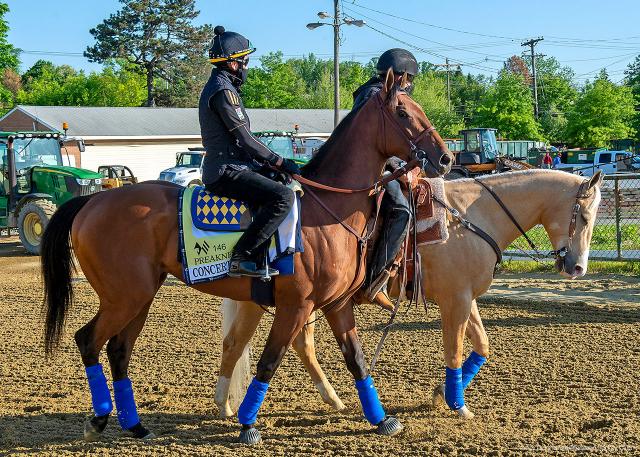