With a $600,000 purse, Saturday's Stephen Foster S. (G2) at Churchill Downs is a major early-summer target for some of the best older horses in training. The fact the 1 1/8-mile race awards a "Win and You're In" berth to the Breeders' Cup Classic (G1) only adds to its lucrative nature.

A picture of consistency in recent starts, Chess Chief hasn't missed the trifecta in his last five runs, most notably rallying to a narrow victory in the New Orleans Classic (G2) at Fair Grounds. The son of Into Mischief prepped for the Stephen Foster with a respectable third-place effort in the Alysheba S. (G2) at Churchill Downs, so it's not a stretch to conclude Chess Chief can factor for another top-three finish under Hall of Fame jockey John Velazquez.

Although Empty Tomb has never won a stakes, the son of Speightstown has made steady progress this season. He enters off a sharp allowance win at Churchill Downs, in which he carved out a steady pace and finished fast to defeat next-out winner Mailman Money by 1 1/2 lengths. His Brisnet Speed ratings might be a little light, but one more step forward could put Empty Tomb in the hunt for a top-four finish.

Placed multiple times against stakes company, Necker Island boasts a solid 3-for-6 record at Churchill Downs, where he rallied to win a one-mile allowance on June 6. But Necker Island did benefit from closing into a destructive pace, and he might not receive as favorable a setup while stretching out over 1 1/8 miles in the Stephen Foster. The good news is, trainer Chris Hartman has been on fire at Churchill this spring (winning at a 38% rate), and you can bet Necker Island will be primed for a maximum performance in his third start of the season. Whether it will be good enough to finish in the top four is a tougher question.

Victory at the stakes level has proven elusive for Spawl, though the four-year-old chestnut has certainly run well against tough competition. During the spring, Sprawl sandwiched narrow defeats in the Ben Ali S. (G3) and Blame S. around a powerful allowance win at Churchill Downs, in which he led all the way to dominate by 7 1/4 lengths. Sprawl is fast enough to factor on his best day, but his history of coming up short at the stakes level suggests a spot in the trifecta or superfecta might be the ceiling for his potential.

Seven-year-old veteran Silver Dust is one of the most accomplished horses in the Stephen Foster field, having accumulated four graded stakes wins during his long and productive career. Third in the 2020 Stephen Foster, Silver Dust enters the 2021 renewal in strong form, having battled to a determined victory in Keeneland's Ben Ali S. (G3) 2 1/2 months ago. Bret Calhoun has been hot at Churchill this meet, winning at a 24% rate, and Silver Dust's workouts suggest another sharp effort will be in the offing. If Maxfield misfires, Silver Dust is the logical alternative to steal the show.

Warrior's Charge looked like a star older horse in the making when battling to victory in the 2020 Razorback H. (G3) at Oaklawn Park. But he hasn't crossed the wire first in seven starts since. Awarded the victory via disqualification in last year's Philip H. Iselin S. (G3), he most recently came home sixth in the Steve Sexton Mile (G3) at Lone Star Park. The son of Munnings has the talent to compete at this level on his best day, but he'll need a turnaround to challenge in the Stephen Foster.

An accomplished stakes performer on both dirt and turf, South Bend won the Street Sense S. at Churchill Downs as a juvenile and even competed in 2020 Kentucky Derby (G1). Conditioned by Hall of Fame trainer Bill Mott, South Bend kicked off 2021 on a high note, rallying to win a Churchill Downs allowance by a length over Empty Tomb. But he never had a chance to factor in the Blame S. at Churchill last month, dropping behind a slow pace before running into severe traffic down the homestretch. With an unencumbered journey in the Stephen Foster, South Bend can factor for a top-four finish at solid odds.

As the lone Grade 1 winner in the Stephen Foster field, Maxfield ranks as the most accomplished of the nine entrants. The once-beaten colt is also an overwhelming favorite to reach the winner's circle. A son of 2007 Kentucky Derby (G1) winner Street Sense, Maxfield boasts a 3-for-3 record at Churchill Downs, highlighted by a runaway victory in the 1 1/16-mile Alysheba S. (G2) two months ago. His 3 1/4-length romp produced a 105 Brisnet Speed rating, tied for the highest figure posted by any horse in the Stephen Foster field. If Maxfield brings his A-game, his rivals are likely running for second place.

Although Visitant couldn't keep pace with Maxfield in the Alysheba S. (G2), the improving five-year-old ran well to finish clearly second-best, 4 1/4 lengths ahead of Chess Chief. Previously a two-length winner of the Kentucky Cup Classic at Turfway Park, Visitant has shown versatility in terms of running style, performing equally well when setting the pace or rallying from behind. A repeat of his Alysheba effort should be sufficient to land a top-three finish. 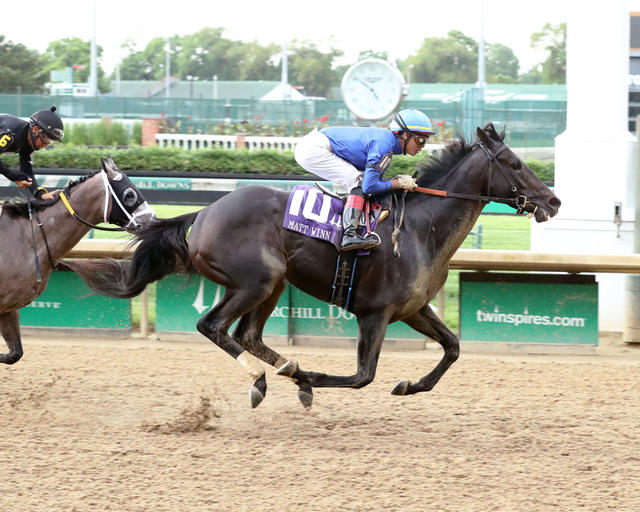