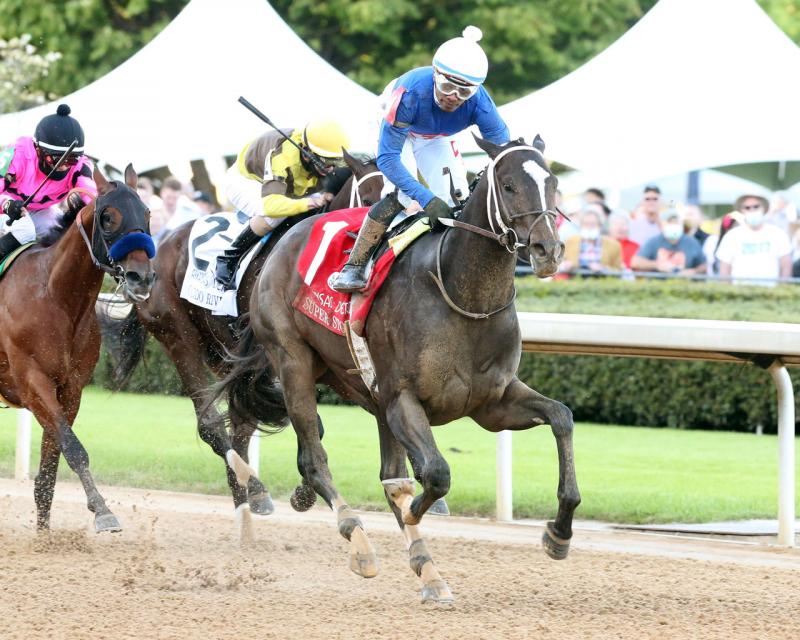 Saturday’s $1 million Arkansas Derby (G1) served up a rematch of the March 13 Rebel (G2), but with a dramatically different result. The 12-1 Super Stock, fourth behind Concert Tour in his Rebel comeback, took a leap forward to stun the heavy favorite and earn a spot in the Kentucky Derby (G1).

Trained by Hall of Famer Steve Asmussen, Super Stock is co-owned by his father, Keith, in partnership with Erv Woolsey. The son of Dialed In had been a useful two-year-old, picking up a sprinkling of Derby points when third in the Iroquois (G3) and Breeders’ Futurity (G1). Super Stock finished his juvenile campaign with a close second in the Oct. 25 Street Sense at Churchill Downs.

That minor stakes received a boost earlier Saturday when Street Sense winner King Fury upset the Lexington (G3) at 18-1. Super Stock made it a trend by following suit at Oaklawn Park, in the final scoring race on the Road to the 2021 Kentucky Derby.

Concert Tour, ironically a son of Street Sense, was bet down to 3-10 favoritism as he looked to extend his unbeaten record. The Arkansas Derby unfolded differently from the Rebel, where Concert Tour went wire to wire, and Caddo River was a subpar fifth.

This time, Caddo River was intent on taking the lead, and the 3.40-1 second choice made good on his connections’ pre-race comments. Concert Tour was on hold as he attended in second. The two favorites were wrapped up in their private match race through fast fractions. In the process, they ended up setting the table for Super Stock, who was working out a ground-saving trip just behind them.

Turning for home, Concert Tour launched his bid and struck the front, but could not establish separation as he did in his Rebel romp. Caddo River kept on boxing away to his inside, and wider out, the big danger was emerging.

Ricardo Santana swung Super Stock to the outside for running room, and the much-improved colt rolled past the leaders to win going away by 2 1/2 lengths. By completing 1 1/8 miles in 1:50.92, the bay banked 100 Derby points to increase his tally to 109.

Caddo River came again to snatch second by a head from Concert Tour. Adding 40 points to his prior 10 from his Jan. 22 Smarty Jones conquest, Caddo River is now safely in the Kentucky Derby field with 50.

Concert Tour labored late in third, good for 20 points and a total of 70. The Bob Baffert trainee already had his Derby ticket from his 50 points in the Rebel, but he’s lost his perfect mark along with the potential to be a favorite.

Get Her Number, like Super Stock by Dialed In, finished another half-length back in fourth. That doubles his Derby points to 20, which currently leaves him on the outside looking in as 26th on the leaderboard.

There was a 10 1/2-length gap to fifth-placer Last Samurai, the 48-1 longest shot on the board. Baffert’s other entrant, Rebel runner-up Hozier, also regressed as last of the six.

Super Stock has compiled a record of 8-2-2-2, $804,762. Both of his wins have come in stakes. He’d broken his maiden in the 5 1/2-furlong Texas Thoroughbred Futurity at Lone Star last summer, when ridden by the trainer’s son and co-owner’s grandson, Keith James Asmussen.

Bred by Pedro Gonzalez and P. J. Gonzalez in Kentucky, Super Stock was purchased for $70,000 as a Keeneland September yearling. He is a half-brother to Boujie Girl, who placed in the 2018 Sorrento (G2) and Del Mar Debutante (G1). Their dam, Super Girlie, is by 2005 Kentucky Derby near-misser Closing Argument. 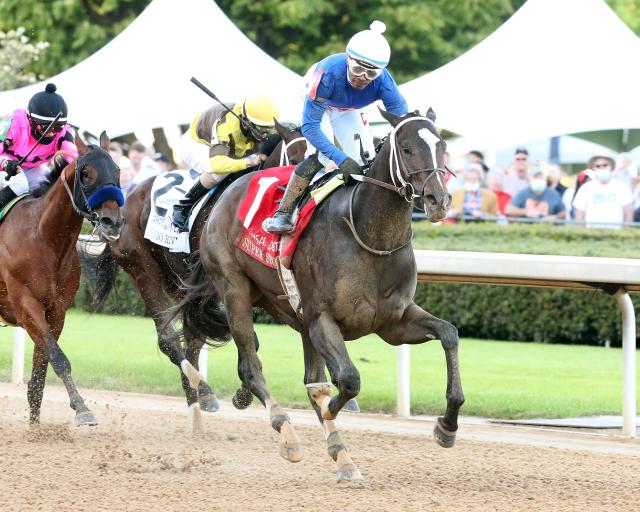