Mo Donegal established himself as a major Kentucky Derby contender with an outstanding win in the Wood Memorial (G2) at Aqueduct, edging next-out Preakness winner Early Voting by a neck, but the Todd Pletcher-trained colt drew the rail post and didn’t experience a favorable trip at Churchill Downs, breaking slowly and traveling ridiculously wide in recording a fast-closing fifth.

He rebounded stylishly in the Belmont.

Owned by Jerry Crawford’s Donegal Racing and Mike Repole, Mo Donegal established a stalking trip in midpack with Irad Ortiz Jr., racing within a few lengths of pacesetter We the People, and the bay sophomore began to advance on the final turn. He accelerated three-wide into the stretch, powering his way to a clear lead, and rolled home to a three-length decision.

The son of Uncle Mo has enjoyed a home-court advantage in New York, winning four straight starts including three stakes. The Breeders’ Cup Classic (G1) at Keeneland is the ultimate goal this fall, but Mo Donegal can race exclusively in New York until then, targeting the Jim Dandy (G2) on July 30 and Aug. 27 Travers (G1) at Saratoga, and the Woodward (G1) at Belmont Park in late September/early October.

Overlooked at 6-1 following a runner-up in the Kentucky Oaks (G1), Nest delivered a commendable effort finishing a clear second.

She’s well-positioned for the second half of the season in the three-year-old filly division.

Following an 80-1 upset in the Kentucky Derby, Rich Strike never made any impact from off the pace and checked in sixth in the Belmont. The late-running colt had shown a preference for inside trips in his last two outings, but Sonny Leon kept his mount well off the rail for the stretch drive.

Mo Donegal confirmed himself as a major player in the three-year-old division, but it is a deep field.

Chad Brown has a trio of championship hopefuls.

Preakness winner Early Voting and Blue Grass (G1) winner and Kentucky Derby third-placer Zandon remain lightly-raced types with room for further development. And unbeaten Jack Christopher, a 10-length winner of the seven-furlong Woody Stephens (G1) on Saturday, is arguably the most exciting three-year-old in training. He’s slated to make his two-turn debut in the July 23 Haskell (G1) at Monmouth Park.

Santa Anita Derby (G1) victor Taiba could also be Haskell-bound, and Kentucky Derby and Preakness runner-up Epicenter, who is targeting the Travers, remains a serious contender in the division.

The Triple Crown featured most of the principals, and we have some terrific races still to come. 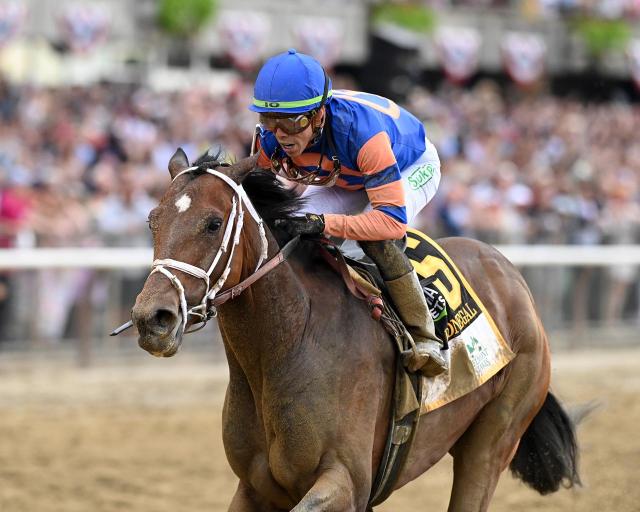