Classic Causeway sprinted clear at the break and rolled unopposed the rest of the way, recording his second consecutive romping stakes victory at Tampa Bay Downs. Irad Ortiz Jr. sat chilly on the chestnut colt most of the way, rousing his mount only in the latter stages.

A 3 3/4-length scorer in the Feb. 12 Sam D. Davis (G3) in his previous outing, Classic Causeway faced pressure before drawing off in his seasonal opener, but the son of Giant’s Causeway had things much easier in the Tampa Bay Derby.

Classic Causeway has improved upon his first two stakes appearances last fall, finishing third in the Breeders’ Futurity (G1) at Keeneland and second in the Kentucky Jockey Club (G2) at Churchill Downs, but the quality of his competition at Tampa has been questionable.

The Brian Lynch-trained colt will face more proven rivals, and make his first attempt at 1 1 1/8 miles, in the April 7 Blue Grass (G2) at Keeneland, a major qualifier in the Road to the Kentucky Derby series.

Classic Causeway moved to the fore of the Kentucky Derby leaderboard by winning the Tampa Bay Derby, increasing his point total to 66.

Street Sense (2007) was the last Tampa Bay Derby winner to wear the Roses.

His class and form puts him prominently in the mix of Kentucky Derby contenders, but Classic Causeway registered a disappointing 90 Brisnet Speed rating for his Tampa Bay Derby win. That pales in comparison to his main opponents.

Granted, he controlled a moderate pace and never appeared to be seriously asked, but after traveling three-quarters in 1:13.18, Classic Causeway was certainly eligible finish faster, requiring nearly 32 seconds for the final three-sixteenths of a mile. He earned only a 90 Late Pace number.

By comparison, Always Dreaming received an 84 Speed rating for his penultimate start before capturing the 2017 Kentucky Derby, but he netted a 112 Late Pace figure after dictating a glacial early tempo.

The Blue Grass will be key from a Speed rating perspective.

Grantham, who was exiting a fourth in the Withers (G3), exceeded expectations at 37-1, stalking in second before gamely outfinishing Shipsational by a neck. Davis runner-up Shipsational didn’t receive the proper setup for closing kick, but the New York-bred colt delivered a respectable effort for third.

Major General, the 4-1 second choice in his first start since winning the Iroquois (G3) last September for Todd Pletcher, stumbled out of the gate and never fired, coming under a ride while last on the backstretch and trailing throughout. 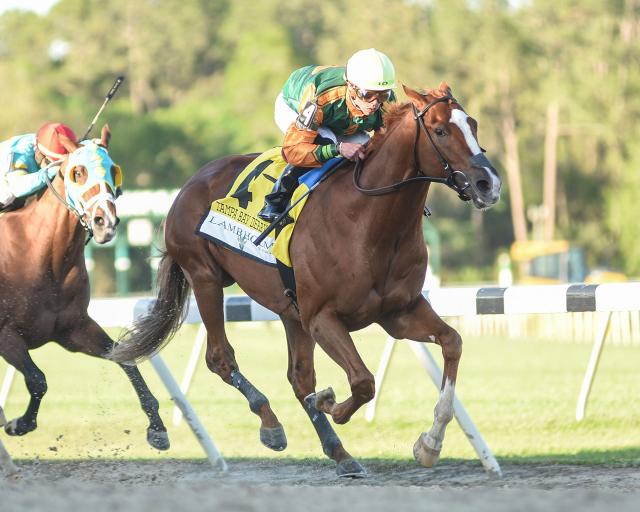