Tales from the Crib: Always Dreaming 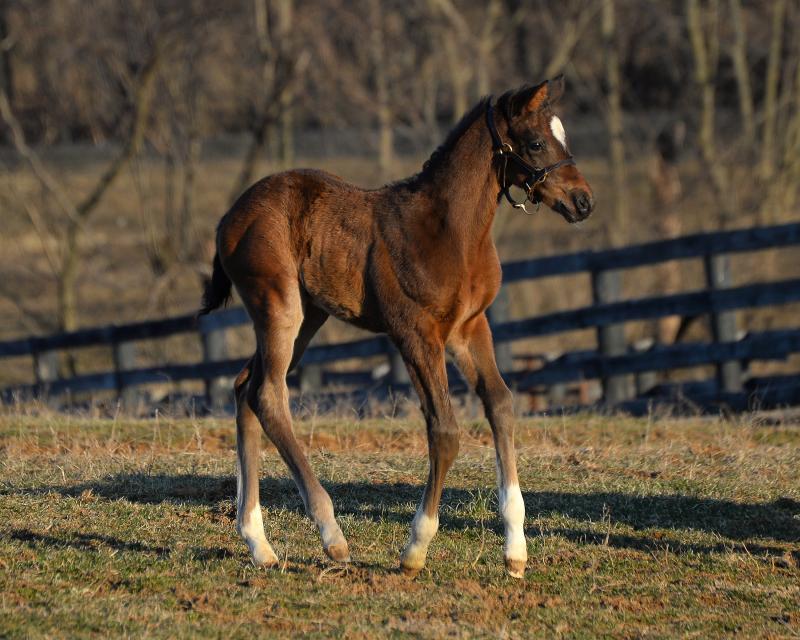 But unlike last year’s Derby champion, Nyquist, who moved to the Lexington, Kentucky, farm after he was bought as a weanling, Always Dreaming was bred by Dilger himself along with his confreres in Santa Rosa Partners. Both Nyquist and Always Dreaming went on to become Dromoland graduates of the Keeneland September Yearling Sale.

Always Dreaming’s dam, Above Perfection, joined the Dromoland fold in late 2006, after her purchase for $450,000 at Fasig-Tipton Kentucky November. A brilliantly fast California-bred, Above Perfection earned her signature victory in the 2002 Las Flores H. (G3) at Santa Anita. She’d also come within a neck of future Hall of Fame sprinter Xtra Heat in the 2001 Prioress (G1) at Belmont Park.

At sales time, Above Perfection was carrying a foal by Dixie Union. That baby, the first she produced for Santa Rosa Partners, turned out to be one of the leading juvenile fillies of 2009 – Hot Dixie Chick. Sold under Dromoland’s auspices for $340,000 as a yearling, Hot Dixie Chick subsequently commanded $435,000 as a two-year-old in training. She wasted no time in rewarding the investment. Hot Dixie Chick broke a Churchill Downs track record in her maiden win and lit up Saratoga that summer, romping in the Schuylerville (G3) and annexing the Spa’s marquee race in her division, the Spinaway (G1).

Hot Dixie Chick’s exploits made Above Perfection a hot commodity. Accordingly, the broodmare (then 11 years old) was offered at the 2009 Fasig-Tipton Kentucky November Sale, where bidding rose as high as $1.15 million. But that wasn’t high enough to reach the reserve set by the seller, and she was listed as unsold at the price.

Fast forward to the spring of 2013, when Santa Rosa Partners sent Above Perfection to the new stallion Bodemeister, who was just entering stud at WinStar Farm. The 2012 Arkansas Derby (G1) hero, and Kentucky Derby and Preakness (G1) runner-up, presented an alluring quality of high speed over a classic distance.

“My partner loved Bodemeister and loved the way he ran as a three-year-old, knew he carried his speed,” Dilger said.

On February 25, 2014, Above Perfection delivered her dark bay colt. So delighted was Dilger that he promptly called WinStar CEO Elliott Walden and left a voice mail for the ages:

“I just want to let you know I had a colt foal last night by Bodemeister as good as you could get one. I am over the moon with the results of this foal.”

The Bodemeister baby ratified that first impression as he continued to develop.

“I graded him very highly.” 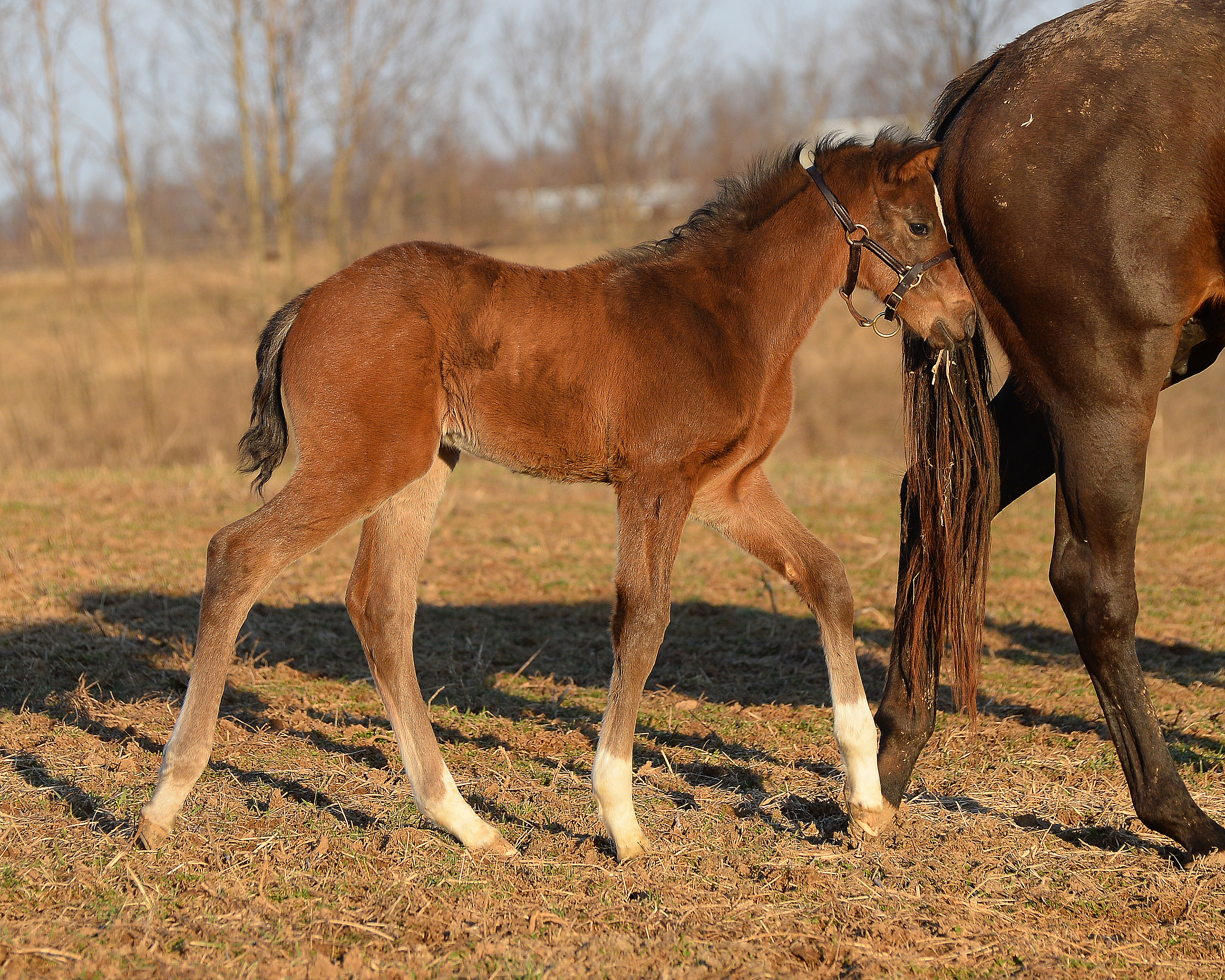 Dilger wasn’t the only one smitten by the Bodemeister-Above Perfection foal.

“Every time, whenever the lads on the farm went by him, they’d say, ‘Jeezus, Gerry, he’s nice.’

“Very, very nice individual,” Dilger summed up. “You could see day by day that he was getting stronger, doing really well.”

(Since the mating with Bodemeister turned out so well, Above Perfection was bred in 2015 to another son of Empire Maker – Pioneerof the Nile, best known as the sire of Triple Crown champion American Pharoah. The resulting foal, a filly, is now a yearling.)

As a yearling, the still-unnamed Bodemeister colt toured the ring at Keeneland September, selling for $350,000 to a partnership headed by Brooklyn Boyz Stables.

Crupi, whose all-star roster of former students includes champion Uncle Mo, regarded Always Dreaming as a good one from the start.

“The good horses always show themselves right away,” Crupi said. “The bad horses turn up like a bad penny!

“To know a good one, you have got to be around good ones.

“Classy, professional, do everything right – that’s what makes a good horse.”

After Always Dreaming left for the racetrack, he placed in both of his starts for original trainer Dominick Schettino. He nearly broke his maiden at Saratoga, just missing by a neck.

Always Dreaming was subsequently transferred to current trainer Todd Pletcher, who observed that the colt wasn’t pushing off as well as he should behind. So he sent him back to Crupi to get sorted out.

Responding well in Ocala, Always Dreaming posted a couple of three-furlong works at New Castle Farm in November – an easy :38.00 and a sharper :36.80. He was now ready to rejoin Pletcher and kick his career into high gear.

Always Dreaming was “going great” by that time, Crupi observed, “and Todd was just in love with him.”

Fans have fallen in love with Always Dreaming too. Three-for-three for Pletcher, he’s vying for Kentucky Derby favoritism after his dominant score in the Florida Derby (G1).

Nyquist likewise captured the Florida Derby en route to Kentucky Derby glory in 2016, and the team at Dromoland is hoping that Always Dreaming follows suit.

When asked if Always Dreaming had any points in common with Nyquist, Dilger noted that they never had a problem as they “went through the growing stages.”

But both colts showed more than strictly physical progress.

“Their minds were great – you could work with them.”

Nyquist, now in his first season at stud at Darley’s Jonabell Farm, has Always Dreaming’s dam, Above Perfection, in his date book. Maybe that union can provide a “Tale from the Crib” story for the Kentucky Derby in 2021… 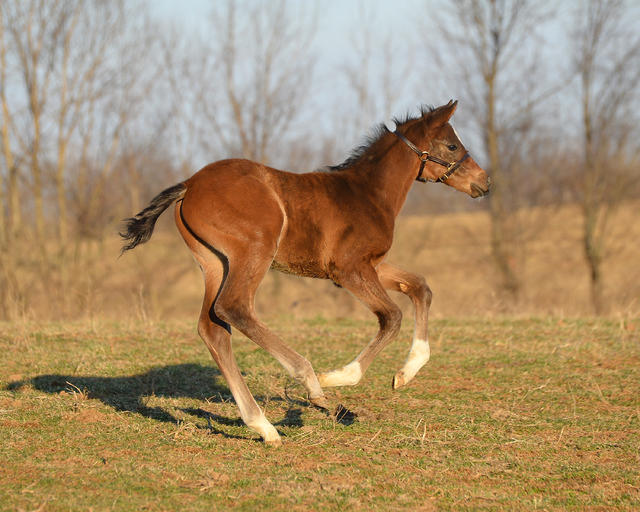