Tales from the Crib: Battle of Midway

In their first few years in racing, Erik and Pavla Nygaard of Thor-Bred Stables achieved top-level success with their bargain buy Rigoletta. Now a prized member of their small broodmare band, Rigoletta has provided them with another rapidly attained milestone: breeding a Kentucky Derby (G1) contender, thanks to her second foal, Battle of Midway.

The Nygaards have mightily impressive resumes. Erik, who helped launch a private equity firm, is “an MIT-educated engineer and a whiz with spreadsheets and anything with numbers and lots of data,” as Pavla describes him. Pavla’s academic background is in molecular biology and genetics – and law. She’s an attorney licensed to practice in the State of New York.

Rigoletta proved a shrewd find by their bloodstock adviser Marette Farrell at the 2010 Ocala Breeders’ Sales Company April Sale. Despite the fact that she worked a quarter-mile in :21 at the under tack show, trainer Dan Hendricks was able to purchase her, on behalf of the Nygaards, for just $35,000.

“I think he was concerned because Rigoletta didn’t have perfect conformation up front – that’s why she was affordable,” Pavla Nygaard said.

“I wasn’t there to see her in person, but I loved her video. I don’t remember the time but I remember the feeling. She floated and I got a skip in my heart. I have heard old timers say often that the horses speak to them, and I have found that to be the case too.”

Rigoletta kept defying the market’s expectations. She broke her maiden at Del Mar that summer, at odds of 12-1, in her second career start. Jumping up straightaway to Grade 1 competition, she was overlooked at 30-1 in the Debutante (G1) and finished third. Bettors still dismissed her next time in the Oak Leaf (G1), where Rigoletta outdueled 1-2 favorite Tell a Kelly and sprang a 32-1 upset.

“We were going wild when she got third in the Darley Debutante, and having her win the Oak Leaf S. was absolutely incredible and very memorable,” Nygaard recalled.

“She was going to go the Breeders’ Cup Juvenile (Fillies [G1]) but got a splint that took her off the trail. It was during her layup that her personality shone through even more. When I went to see her at the layup farm, she was the unhappiest I had ever seen her. She did not like being in jail and she let me know in no uncertain terms that she was bored out of her mind and wanted to go and do something.”

As much as Rigoletta desired to get back to work, she sustained a tendon injury in the 2011 Honeybee (G3). Connections decided to retire her to Drew Nardiello’s Chesapeake Farm near Lexington, Kentucky.

“She was smart, she was tough and she loved to compete,” Nygaard said. “I can see the same in the pastures when she bosses others around, but she has always been very personable with me when I went to the track and now when I see her in the pastures.”

Rigoletta began her new life as a broodmare by visiting Smart Strike. That first foal, a filly named Rigged Smart, didn’t race. Barren the next year, Rigoletta returned to Smart Strike again in 2013.

Now Rigoletta got in foal, carrying the future Battle of Midway, but the expectant mom had a serious health scare along the way.

“Rigoletta had surgery while she was around four months in foal with him,” Pavla revealed. “She got a foot abscess that turned into a coffin bone infection and there was lengthy and expensive rehab for her to go through to make sure her foot was all right.”

Thankfully, Rigoletta came through just fine. On January 30, 2014, she delivered her Smart Strike colt at a snow-spattered Chesapeake. 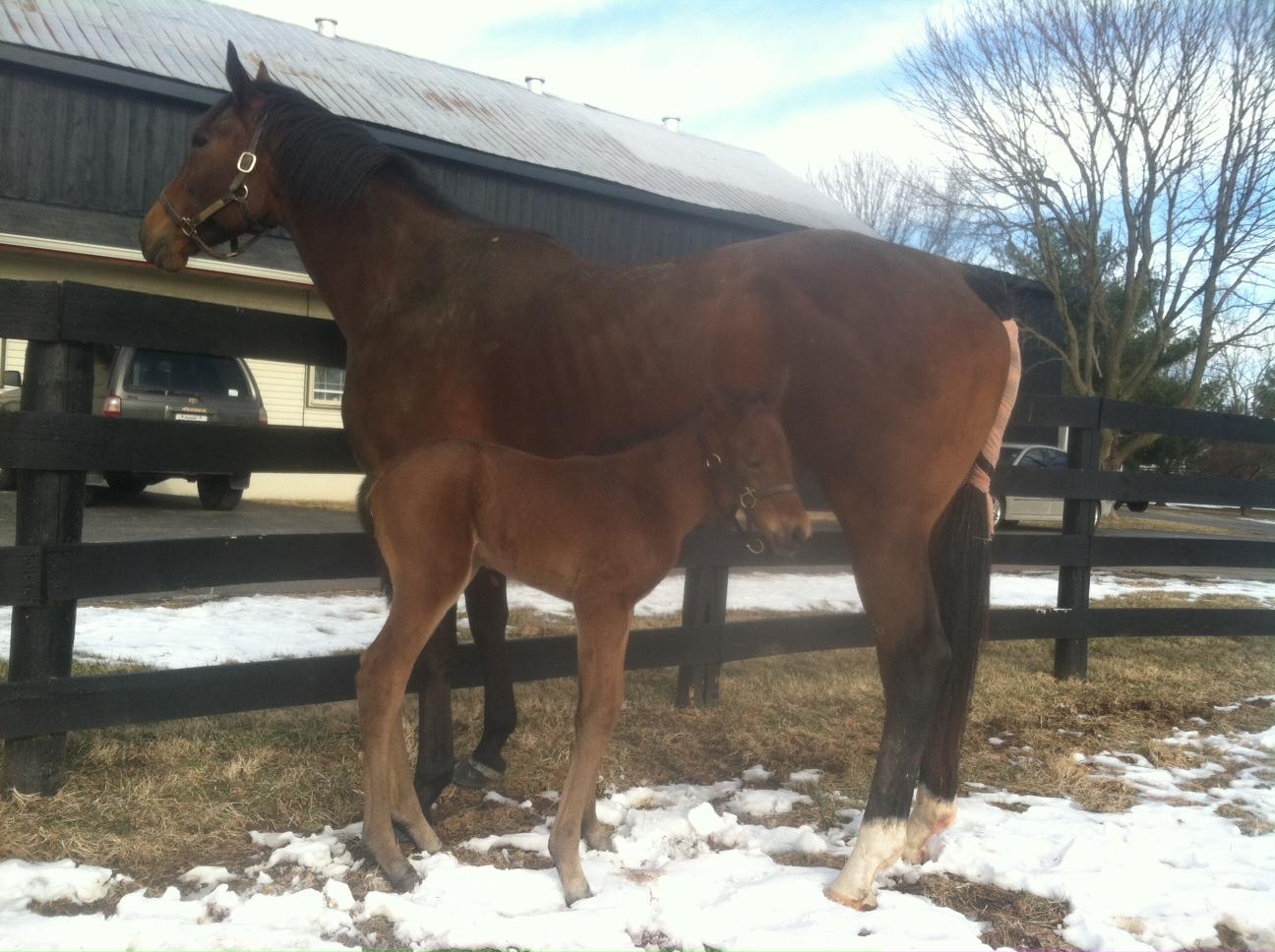 Nardiello, who raised 2007 Kentucky Derby champion Street Sense for late owner-breeder Jim Tafel, liked what he saw from this youngster.

“Rigoletta and her foals have always been, ‘Who’s that?!’ They always caught your eye,” Nardiello said.

“A pretty straightforward colt,” he had the attributes “typical of all nice horses – athletic, light on their feet, move well. He was a good-moving horse, conformationally nothing wrong with him.

“He was one of the earliest foals that year, so he was always the big one, always the boss. That kind of comes naturally.

“You see him out there playing with the others, he was the biggest and strongest. He was the boss.”

That came as a relief to Nygaard.

“I would look at him and wonder if that surgery (that Rigoletta underwent while carrying him) would have any effects on him,” she said, “but he would bounce around, come up to see what I had for him, and I thought he was beautiful.”

On her visits to Kentucky, Nygaard loves to spend as much time she can with her horses. Nardiello offers as much hospitality as he can – with the proviso that she come back in from the fields before dark.

“Since we live in California, I don’t get to see our horses in Kentucky nearly as often as I would like, but when I do I like to go and ‘hang out’ with them in the pastures, in the stalls.

“I prefer to do that on my own as I feel I get to catch a better glimpse into who they are, how they play with each other, how they approach me, who tries to beat who up, who leads, who follows, how they move around, how they react to things.”

“Rigoletta’s foals so far have a lot of their Mom, and the look in her eye tends to be in them. There is intelligence, there is class, there is charisma, there is awareness of where everyone else is around them, and in the boys there is an element of troublemaker in them.

“I wouldn’t say that the troublemaker personality is from being bad, just from needing a job and getting in trouble without one, and doing better the harder they work.”

Nygaard values Nardiello’s approach to raising horses: one of the things that “I love about Chesapeake Farm is that the horses get to be horses, they don’t get ‘hot-housed,’ and so they get plenty of time running, playing and rough-housing with each other. They tend to have more than their fair share of nicks and bite marks but that’s how they learn.

“In that, I would say that Battle of Midway would be the ringleader, leading others into trouble and egging them on to participate.

“One fond memory I have is when Benny Betts, our farm manager from our Florida farm (the Ocala Jockey Club), came up to Chesapeake Farm with me when we went there for the July yearling sale that year, and we went to see the weanlings in the pastures. Battle of Midway was all over us and Benny took up wrestling with the colt who clearly delighted in that physical experience with Benny.” 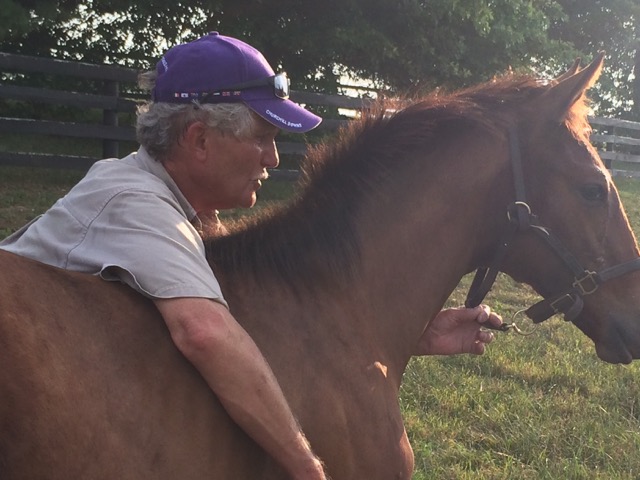 In contrast, another of her youngsters – the colt who grew up to be Klimt, the 2016 Del Mar Futurity (G1) and Best Pal (G2) winner – was more circumspect.

“Klimt seemed more of an observer to me. He wasn’t as big as the others. He was an April foal rather than one of the early mature ones and so he didn’t seem to engage in the physical rough play in the same way. He seemed to be more interested in playing smart rather than rough. He was curious, nimble and quick, and I think he would play to that strength while playing more than by direct physical challenge like Battle of Midway seemed to enjoy.”

Rigoletta’s boy “was a bit pushy, just in the same sense that he knew he could be strong with the other yearlings. I don’t recall him being a bully or hard to handle, just strong-minded, like his Mom.”

The yet-unnamed yearling was slated for the elite Fasig-Tipton Saratoga Sale in 2015, but he didn’t make it easy on his sales prep team, as Nygaard recounts.

“If I remember correctly, Battle of Midway needed to be walked extra when he was getting ready for the yearling sale just to get something done. He had to be behind bars in his stall because his pastime was to try to pull fan cords out of sockets, and the farm was convinced he would get himself electrocuted before he would make it to the sale.”

Then a few weeks before the sale, “he decided to rip the water bucket (plus the board that held it) off the wall, just for something to do,” and promptly stepped on a dislodged nail. “We were all concerned about his foot. It was fine by the time the sale came around, but it kept us in suspense for sure.”

Shipped to Saratoga to be sold as part of the Gainesway consignment, the big, strong bay caught the eye of bloodstock adviser Tom McGreevy, who has scouted a stable full of stars for Rick Porter’s Fox Hill Farms, including 2011 Horse of the Year Havre de Grace and current champion Songbird. McGreevy went to $410,000 to secure the colt for Fox Hill.

Porter, an ardent supporter of our veterans, named one of his past standouts “Normandy Invasion” in honor of the pivotal event of World War II in Europe. He was a prominent contender in the 2013 Kentucky Derby, offering a bold, sweeping move before finishing fourth to Orb in the slop.

For the Smart Strike-Rigoletta colt, Porter chose to commemorate World War II’s pivotal event in the Pacific theater – the Battle of Midway. Does that portend a similarly gallant try in Derby 143?

Porter sends his youngsters to Bill and Lynn Recio’s Lynwood Stable for their early lessons. Also at their Ocala, Florida, academy was Farish and Kilroy’s Guest Suite, a one-time candidate for the 2017 Derby after winning the Lecomte (G3).

Battle of Midway was “much bigger than Guest Suite,” according to assistant trainer Gene Recio.

Since Battle of Midway was a “big, good-looking horse” who was “easy to be around,” they were “quite confident that he was going to be late developing.”

That wasn’t because of any issues, just part of the natural process for a juvenile of his scope to mature.

“Mr. Porter is big on giving them the time they need,” Recio added.

Battle of Midway has rewarded that patience. He’s also shown his mother’s fighting spirit, especially in his close second in the Santa Anita Derby (G1) that landed him a spot at Churchill Downs.

In that, Nygaard recognizes the feisty youth of the Chesapeake paddock.

“I would say that seeing Battle of Midway’s gritty performances so far, when he seems not very willing to give in and wants to compete, that seems consistent with how he was as a foal.

“I was very happy that Battle of Midway was bought by Mr. Rick Porter at the sale,” Nygaard said. “He has been such a good person for the industry and a good kind man. I felt the colt would get great opportunities in his program and I am very happy about how Battle of Midway has done in Jerry Hollendorfer’s hands for Mr. Porter.”

Battle of Midway has since been privately purchased by the partnership of WinStar Farm and Don Alberto Stable, and Nygaard thoughtfully included his new owners in her well wishes.

“I wish WinStar and Don Alberto continuation of good fortune.”

Whichever flag he flies, Battle of Midway promises to be a plucky warrior – and quite possibly an ace. 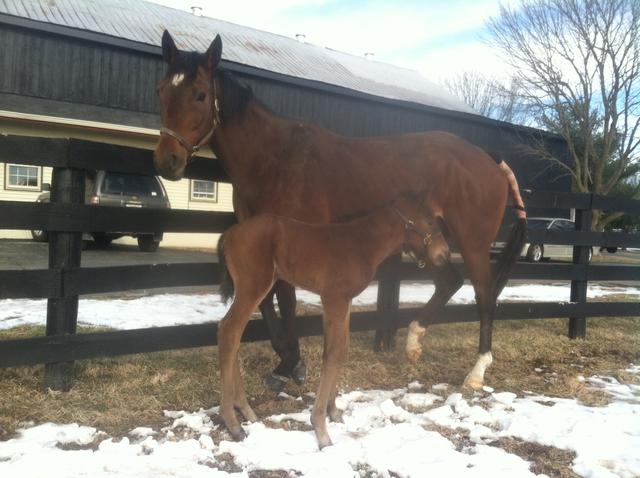