Tales from the Crib: Cyberknife 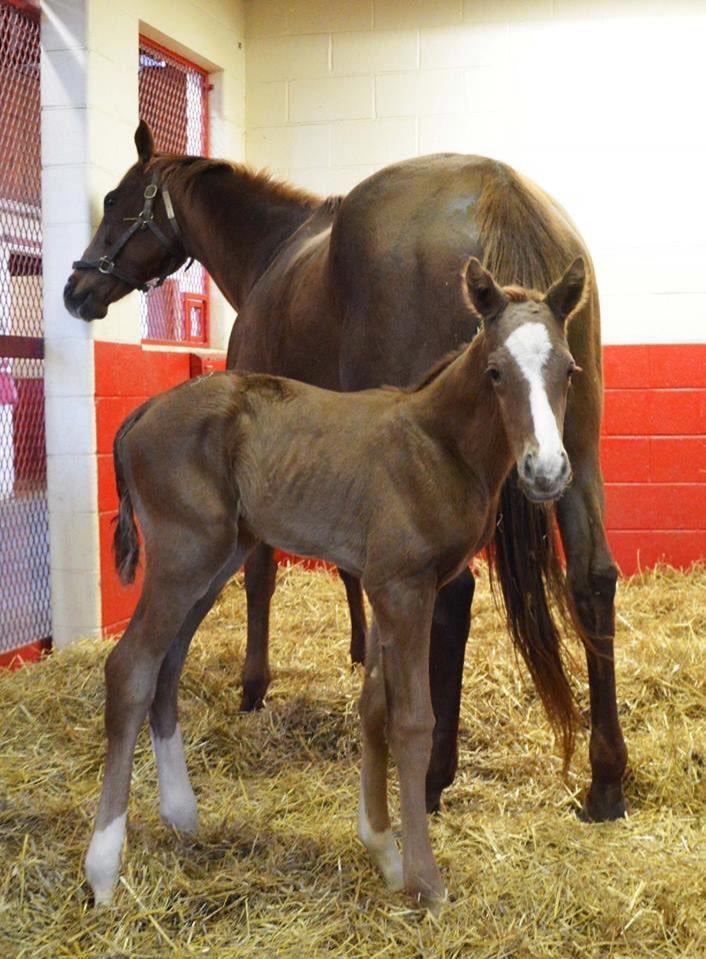 Cyberknife was a big foal who grew to have a forceful personality (Photo by Ramsey Farm)
From one perspective, Cyberknife is well named. Owner Al Gold of Gold Square wanted to highlight the non-invasive cancer treatment that restored his health while preserving his quality of life. The equine Cyberknife, fittingly, has given him his biggest victory in his racing life, taking Gold to his first Kentucky Derby (G1).
But from another angle, the Derby contender Cyberknife hasn’t exactly been a precision instrument. On the contrary, the exuberant colt has had a mind of his own from the start. It’s taken a lot of horsemanship at every stage to help Cyberknife deploy his abundant talent in the right way. You might say they’ve had to teach him to focus his energy, analogous to the way that Accuray Inc.’s CyberKnife System targets its radiation.
Cyberknife was bred by Ken and Sarah Ramsey at their Nicholasville, Kentucky, farm. Four-time Eclipse Award winners as owners, they have also been honored twice in the outstanding breeder category. The Ramseys are fixtures especially on the Kentucky racing scene, ranking as the all-time leading owners at both Churchill Downs and Keeneland. The Kentucky Derby, though, has eluded them.
Cyberknife’s dam, Awesome Flower, contributed to the Ramseys’ win totals. Claimed for $30,000 at Gulfstream Park, she developed into a graded stakes-caliber performer for trainer Mike Maker. Awesome Flower captured six stakes, on every kind of surface (dirt, turf, and synthetic), and placed in seven others, most notably the 2013 Chilukki (G2) at Churchill.
Awesome Flower was bred to the Ramseys’ champion turf horse and top sire, Kitten’s Joy, and produced a minor winner. Visiting Horse of the Year Gun Runner in his first season at stud, she delivered a colt on March 14, 2019. The foal was a chestnut, like both parents. 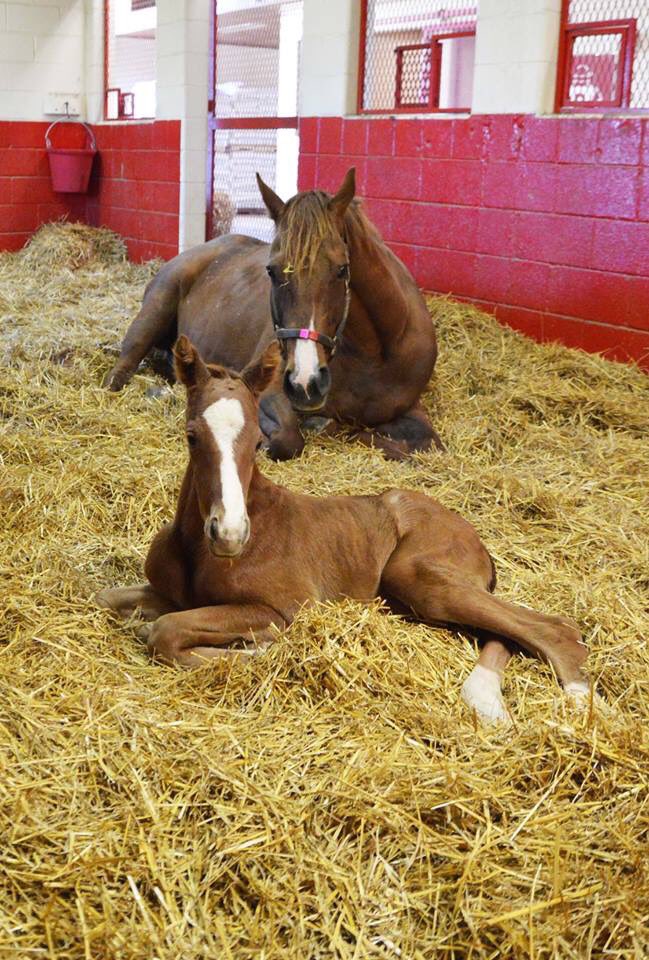 “He was a big, good-looking foal – a 125-pound foal when he was born,” Ramsey Farm manager Mark Partridge recalled.

Cyberknife’s babyhood was “pretty uneventful, as the good ones usually are,” Partridge noted. “They put every step forward, they’re not sick or hurt.”
As he grew up, the colt’s forceful personality came to the fore.
“When he was a yearling, he was tough,” Partridge said. “He was the one you always had to put the lip chain on when we started to prep him (for the sale). He always had that attitude.
“A lot of young horses you have to teach to be aggressive. You didn’t have to teach him to be aggressive. He had that fight in him.”
The colt had the looks to go along with that attitude. Gun Runner’s first crop was a hot commodity in the auction ring, and his son out of Awesome Flower was no exception.
At the Fasig-Tipton Selected Yearlings Showcase, young bloodstock agent Joe Hardoon went to $400,000 to buy the colt on Gold’s behalf. Hardoon serves as racing manager for Gold’s stable, Gold Square. Chad Summers, best known for training two-time Dubai Golden Shaheen (G1) hero Mind Your Biscuits, is another noteworthy member of the advisory team.

Cyberknife was sent to Susan Montanye, proprietor of SBM Training and Sales in Ocala, to learn his early lessons. He proved to be a challenging pupil, to put it charitably.
“He was fun, that’s for sure,” Montanye said.
Comparing the youngster to a talented schoolkid who doesn’t want to get his act together, Montanye described every day as an adventure.
Cyberknife’s mentality was “I want to do it my way, not your way,” she summed up.
“He has loads of talent,” as he showed throughout his early training. “It was all a mental thing.
“As he progressed at the training end, and he became more fit, and the hormones kicked in, he spent a lot of time on his hind legs, not on all fours. It was a typical process every day.
“I have a picture of him trying to mount the pony – that’s the definition of Cyberknife. It was always something.
“You can’t let your guard down around him because he’ll try to pull a trick out of his sleeve.
“You knew he was going to do something. He still does something to this day, but that’s what makes him Cyberknife.” 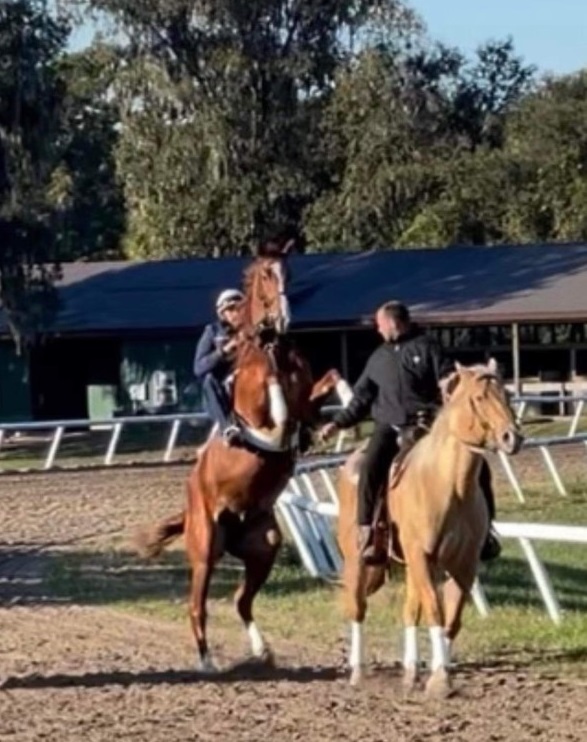 Only one rider could be entrusted with the tough job of trying to control and steer Cyberknife – Juan Hernandez, whom Montanye praised as one of the biggest assets to her whole operation.
“Juan is phenomenal,” she said, with his knack for handling Cyberknife, “finicky fillies,” and other types to try one’s patience. “He can flat ride anything.”
Montanye credits Hernandez for being a “key, core” player in getting Cyberknife in a fit state to go to the racetrack.
At least the physical fitness part came naturally.
“You couldn’t get him tired,” Montanye revealed. “You’d think, let’s go faster and stronger and make him tired, but he wouldn’t get tired. He’d get fitter and fitter, and happier and happier.”
When Cyberknife was put in the round pen, in hopes that he’d run around and expend his excess energy, instead he’d sleep. That was just another example of Cyberknife doing his own thing.
After a few works last summer at Keeneland, Cyberknife joined trainer Brad Cox’s elite squad at Saratoga. Montanye let Cox know what force of nature was descending upon his barn.
“Please don’t hate me,” Montanye recalled telling Cox. “He’s not a cakewalk.”
Indeed, Cox and his team have had to work through Cyberknife’s idiosyncrasies. Exercise rider Katie Tolbert has been involved in his development, which has progressed apace of late.
The learning curve is evident in Cyberknife’s race record, revealing the high regard as well as the frustration that he evokes. Although he finished first in his Churchill Downs debut as the 6-5 favorite, he was disqualified for interference and placed second. Cyberknife was the 4-5 choice to get the job done next time at Churchill, but he was a bit wayward in the stretch and wound up second by a half-length.
The third time was the proverbial charm. Aside from the experience factor, Cyberknife appreciated the step up in distance to 1 1/16 miles at Fair Grounds. Yet his daylight margin in midstretch shrank to a half-length at the wire.
Cox decided to put the blinkers back on Cyberknife, who hadn’t worn them since his first start. That theoretically should have helped him maintain focus as he joined the Derby trail in the Lecomte (G3). Instead, Cyberknife threw in the worst race of his life in a distant sixth.
Not wanting to advance to the Risen Star (G2) off that poor effort, Cox entered him in an allowance on the undercard, and ditched the blinkers. Cyberknife responded, not only winning decisively, but looking more professional.
Finally ready to punch his Kentucky Derby ticket, Cyberknife followed up with another victory in the Arkansas Derby (G1). He still pulled a trick, unseating jockey Florent Geroux in the post parade. But he was authoritative in the race itself, rewarding all the extra effort to manage him.

We're showing our support for Cyberknife in @KentuckyDerby 148! Today we placed a saddle blanket on the Gallopalooza horse outside the Brown Cancer Center.

The horse is named for the non-invasive cancer treatment used to treat his owner, Al Gold, a prostate cancer survivor. pic.twitter.com/dki4Y8Sui7

Cyberknife has also given Gold the welcome opportunity of promoting the cancer treatment. While Gold was treated successfully for prostate cancer, the non-invasive CyberKnife System can be used for tumors in other organs, according to Accuray Inc.
“When I was first told I had cancer, fear overtook all logical thought,” Gold said in a recent Accuray Inc. press release. “Will I survive, what kind of treatment will I have, what about my family?
“Learning about the CyberKnife System gave me hope for my future. CyberKnife was a simple, pain-free treatment that enabled me to continue enjoying my life. Grateful to the successful treatment, I named my most promising horse Cyberknife.”
The equine Cyberknife is gaining fans eager to root for Gold’s heartwarming story, and to raise awareness for other cancer patients. If he can channel his energy properly on the first Saturday in May, Cyberknife will continue his transformation from rowdy youngster to fine-tuned racing machine. 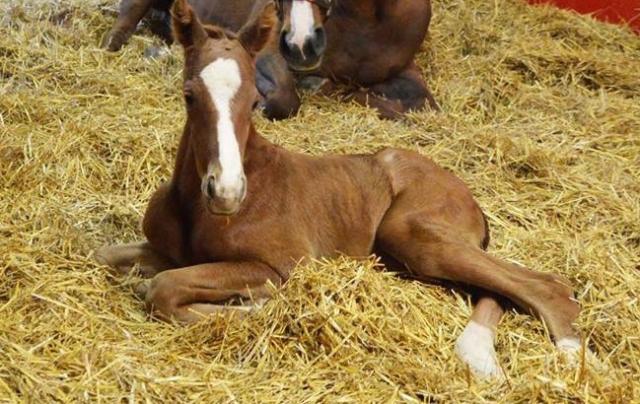