Tales from the Crib: Dennis' Moment 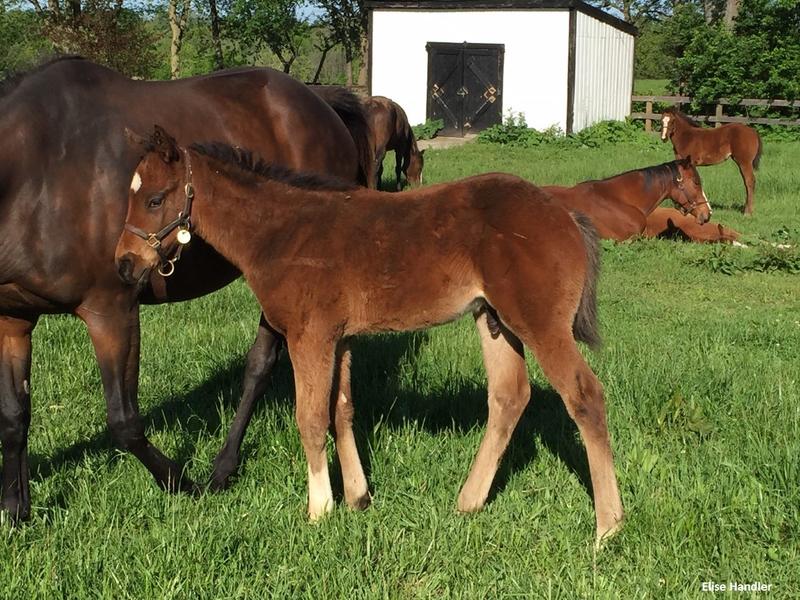 Dennis' Moment as a foal (Photo courtesy of Elise Handler) 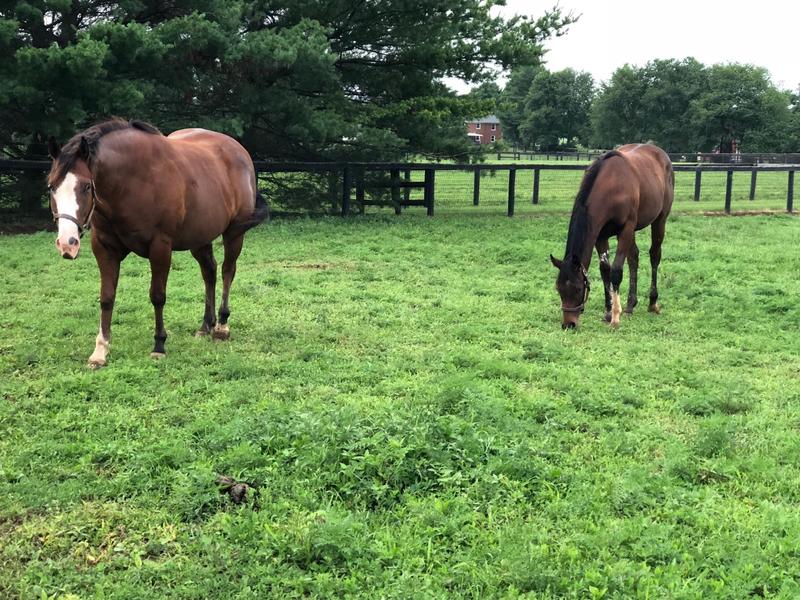 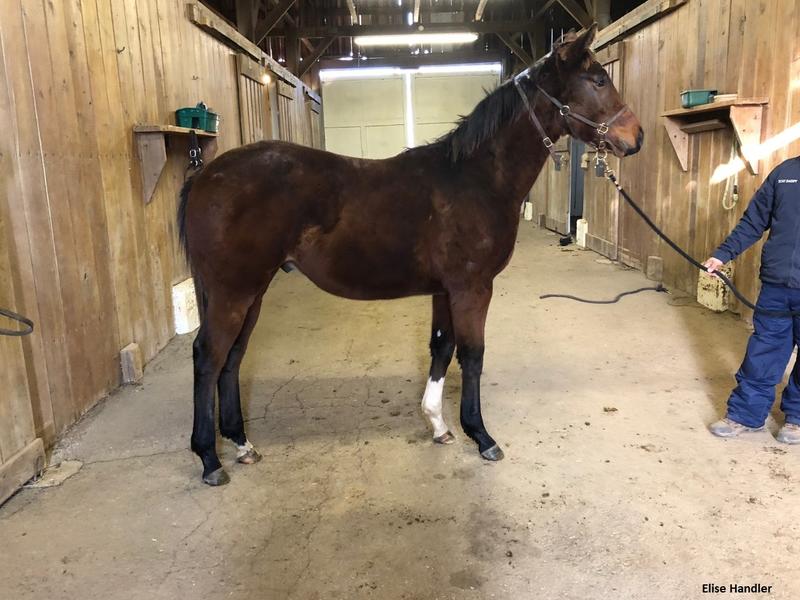 If you needed any evidence that Kentucky Derby (G1) contender Dennis’ Moment is unflappable, just watch his career debut at ChurchillDowns last June.

Advancing on the rail in the initial stages, the Albaugh Family Stables runner was badly hampered when a rival came in on him – so much so that he clipped heels, lost his rider, and nearly went down. That’s scary enough for any horse, especially for a youngster in his first-ever race experience. You could expect a riderless horse to continue running in some fashion, mainly through instinct to keep up with the herd.

Dennis’ Moment did a lot more than that. In fact, he showed competitive intent along with a firm grasp of the playing field. Regrouping and adjusting on the fly, he worked out a “winning” trip for himself. He angled around an opponent who was going nowhere, found a clear path without going any wider than absolutely necessary, took aim on the leader, and caught him at the wire.

His remarkable effort does not show up that way in the past performances. Officially he is listed as a horse who did not finish, only because in the absence of his jockey, he wasn’t carrying the proper weight. But in reality, his recovery spoke volumes about his natural ability and poise, a quality that he’d had from his babyhood.

Dennis’ Moment was bred by a young newcomer to the business – Geoff Nixon, in the name of Tolo Thoroughbreds. His dam, Transplendid, was one of the first mares purchased by the Texas construction company owner.

Transplendid was scouted out by Elise Handler, who now serves as manager of Nixon’s Kentucky farm, Grantley Acres. Handler described what attracted her to the young mare, a winner of just one of 14 starts and carrying her first foal at that Keeneland November Sale in 2015:

Transplendid also offered an opportunity to buy into a “lovely, deep family” descending from a star turf mare in Southern California in the late 1960s, Pink Pigeon. Another plus was that Transplendid was out of a graded stakes-producing mare by a noted broodmare sire in Deputy Minister.

“She looked a lot more like Deputy Minister,” Handler said, than her own sire Elusive Quality.

Selling late in the sixth session of a marathon 12-day sale, Transplendid eluded the attention of many buyers, and Handler was able to snap her up for $50,000. They couldn’t have guessed it then, but she would turn out to be quite a coup.

Nixon, an avid student of pedigrees, settled upon Hall of Famer Tiznow as her next suitor, and Transplendid’s bay colt was born March 15, 2017. 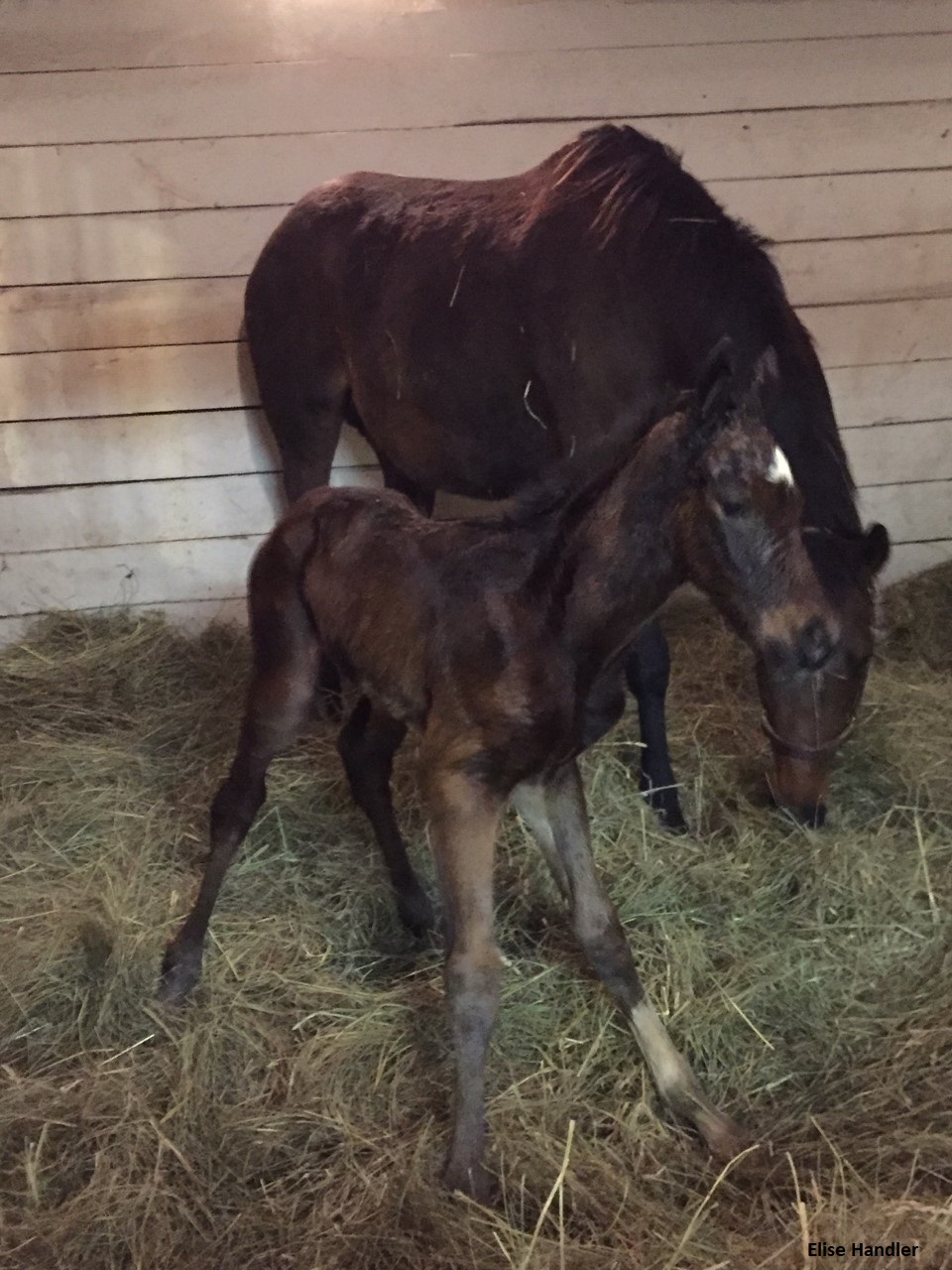 On the scene to help was Matthew Schering. A mainstay on foal watch at the farm, Schering put in the hard work of many long nights. He would keep a close eye on the broodmares and assist with the blessed event of the birthing process. While the owners and breeders receive the attention because their names are in the records, it’s these hands-on workers who are essential to the horses’ success.

Handler credits Schering, foreman Jorge Navarro, and all the farm staff for their indispensable efforts as caretakers. Having such positive human interaction makes a big difference to the impressionable babies.

“That’s why every single one of my yearlings will come over to you,” without having to be lured by a treat.

“Felix raises all the colts. He teaches them manners. He’ll nip at them and teach them who’s in charge.”

The Tiznow-Transplendid colt was calm by nature, so Felix and the crew were nurturing and reinforcing his innate character.

“He was an absolute puppy, an absolute dream to work with,” Handler said. “From the time he was born, he was laid back about everything.

“Nothing ever fazed him. You wish all of them were like him.

“I loved, loved that baby. I told Geoff, ‘this is a really special colt.’ 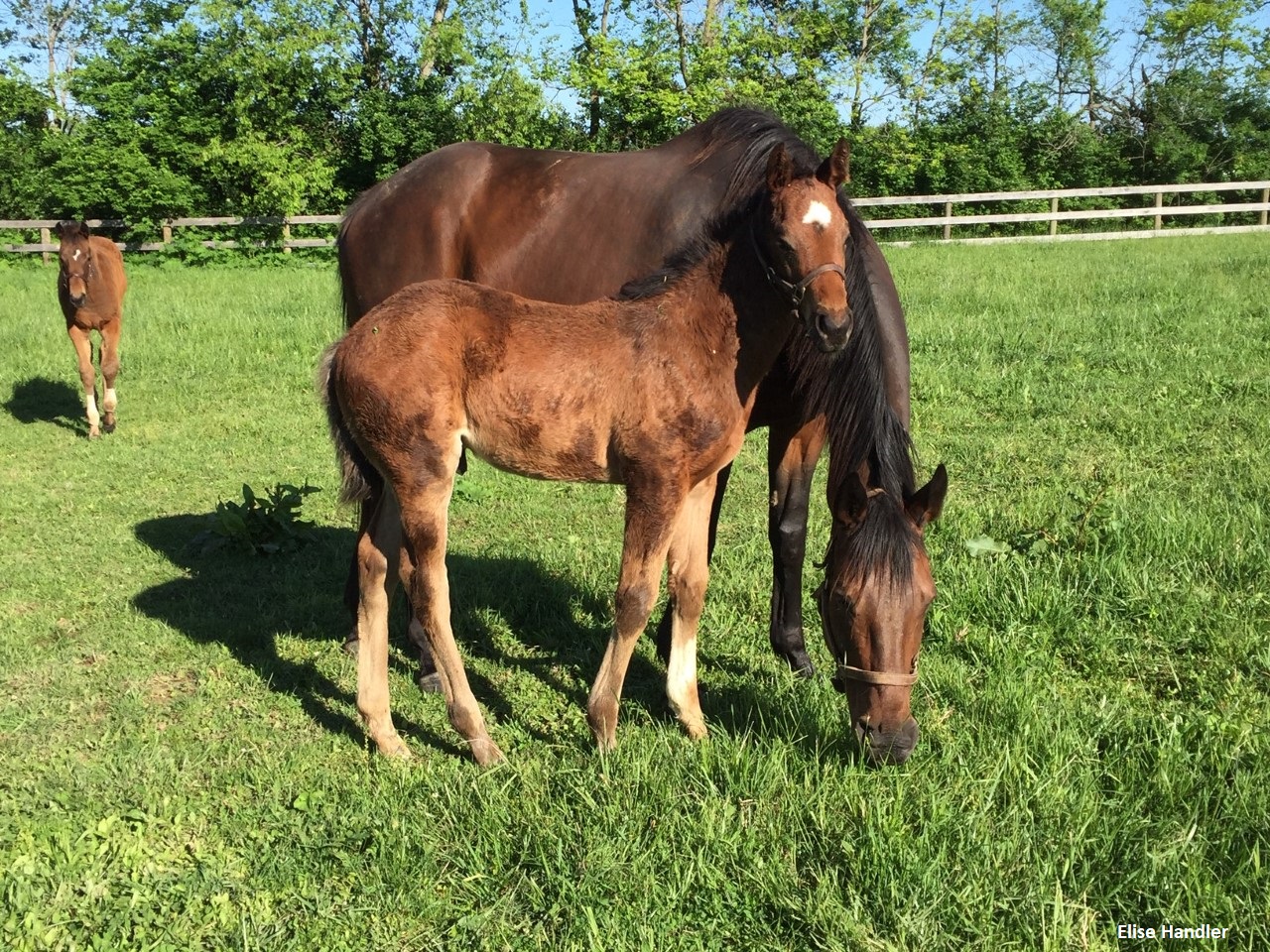 A case in point was his novel experience of travel as a yearling. After flying from his native Kentucky to upstate New York for the Fasig-Tipton Saratoga Sale, and taking a van ride, he disembarked like an old pro.

“The other yearlings were jumping around,” Handler recalled. “He just dropped his head and started grazing.”

As a business decision, it made sense for Nixon to sell in order to get a return on his investment – a sound strategy whenever possible in the capital-draining enterprise of Thoroughbred breeding. But there was a trade-off in knowing that they could be letting a very good one get away. Nixon, speaking to Thoroughbred Daily News ’ Jessica Martini for an Oct. 14 article, revealed that one of the staff asked him not to sell the colt, so highly was he regarded on the farm.

The colt was consigned to the sale by the newly established Ballysax Bloodstock. The force behind Ballysax, though, was no novice – Irish expat Carl McEntee, who hails from a long line of distinguished horsemen.

With a pedigree suggesting that he’d prosper in time around a route of ground, the Tiznow colt fit just the type of yearling that the Albaugh family tends to buy. They’ve been on the Triple Crown trail for a few years now with the likes of Brody’s Cause, J Boys Echo, Free Drop Billy, and arguably the best of them, Not This Time, who unfortunately was retired with injury before he could fulfill his potential. 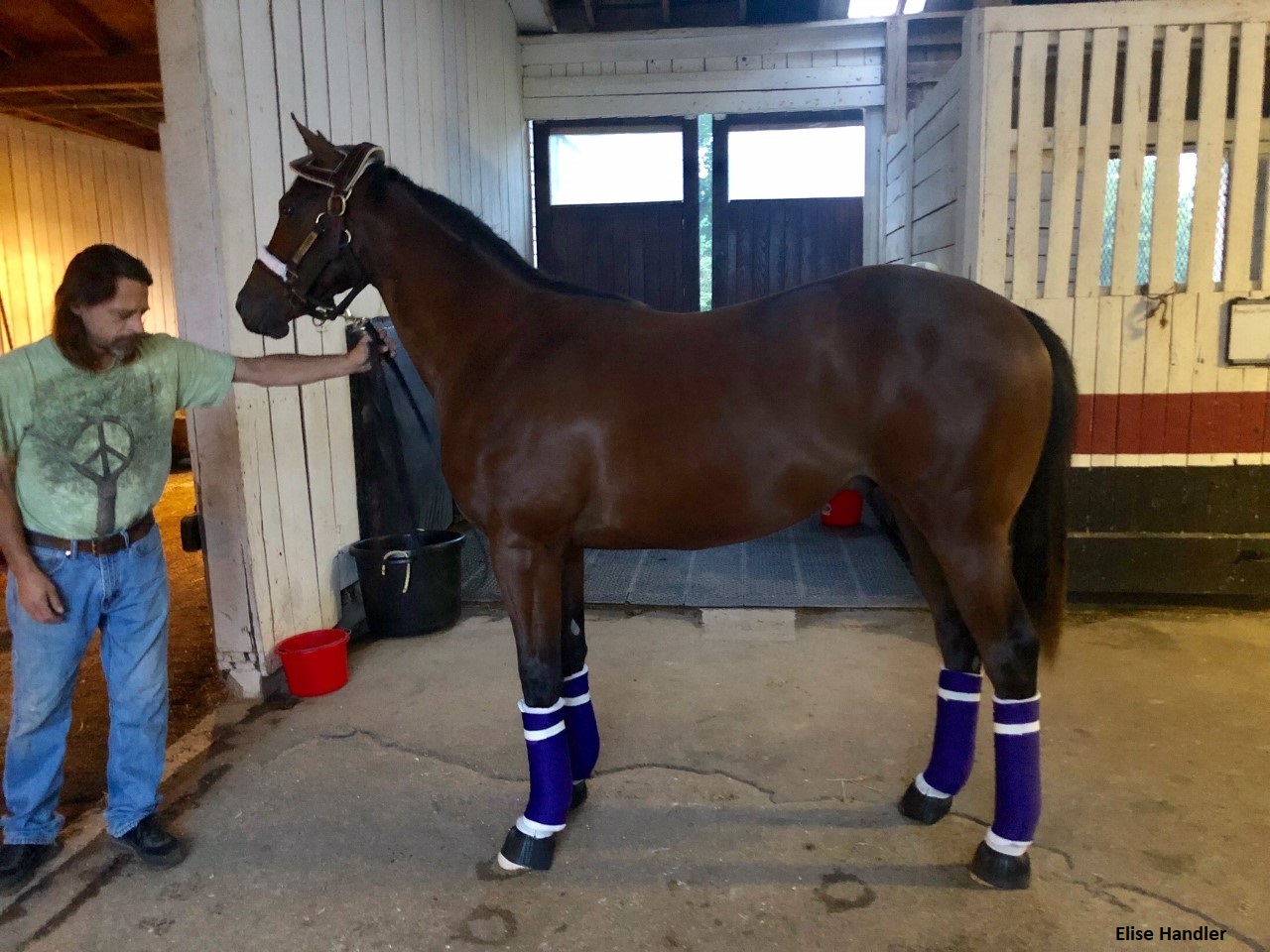 Thus Albaugh Family Racing purchased the prospect for $400,000, with their adviser, Barry Berkelhammer, acting as agent. Berkelhammer, whose past auction finds include Hall of Famer Ashado and Harlan’s Holiday, develops the Albaugh youngsters at his Abracadabra Farms in Ocala, Florida. So the son of Tiznow went to school with fellow Derby contender Thousand Words, co-owned by Albaugh and Spendthrift Farm.

The Albaughs often name horses after family members and friends, but none had yet been named for the patriarch of the whole operation, Dennis Albaugh. They surprised him with “Dennis’ Moment,” with an allusion to Tiznow.

Sent to trainer Dale Romans at Churchill Downs last spring, Dennis’ Moment was gearing up nicely for his racetrack premiere. After that went awry with the heel-clipping incident, he came right back to wire an Ellis Park maiden by an eye-popping 19 1/4 lengths. Dennis’ Moment ran his rivals off their feet in 1:21.95, just off the 7-furlong track record of 1:21.37 set by Josh’s Madelyn (a next-out Grade 2 winner) in 2004.

Continuing to train forwardly, and able to fire bullets with apparent ease, Dennis’ Moment took his next step in the Sept. 14 Iroquois (G3) at Churchill. The 2-5 favorite prevailed readily in the first points race toward the Kentucky Derby, and set himself up for a championship-clinching tilt at the Breeders’ Cup Juvenile (G1). Frustratingly, his race was over even as it began: a terrible stumble at the start, where he buckled to his knees, effectively put the 9-10 favorite out of contention at Santa Anita.

That bad luck didn’t carry over to the sales pavilion a few days later. Dam Transplendid, in foal to prominent sire More Than Ready, had been added to Fasig-Tipton Kentucky’s November Sale. Offered under the Ballysax banner, she commanded $1.4 million from Eaton Bloodstock, agent for Sugar Valley Farm. The market recognized that Dennis’ Moment, regardless of what happened in the Breeders’ Cup, was a serious horse.

“In this business you need to have a little luck,” Handler said of the windfall from a $50,000 buy. “Geoff is a really lucky guy.” 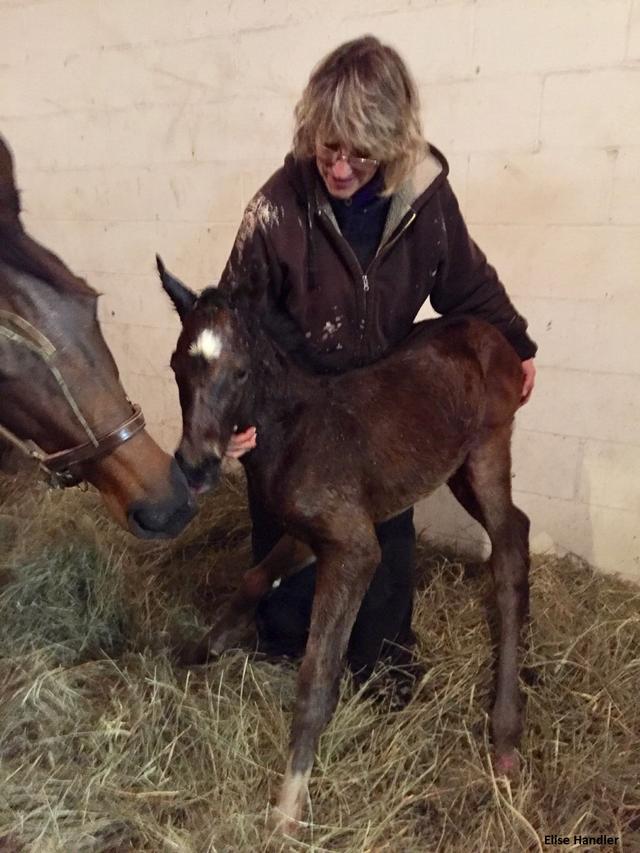