Tales from the Crib: Finnick the Fierce 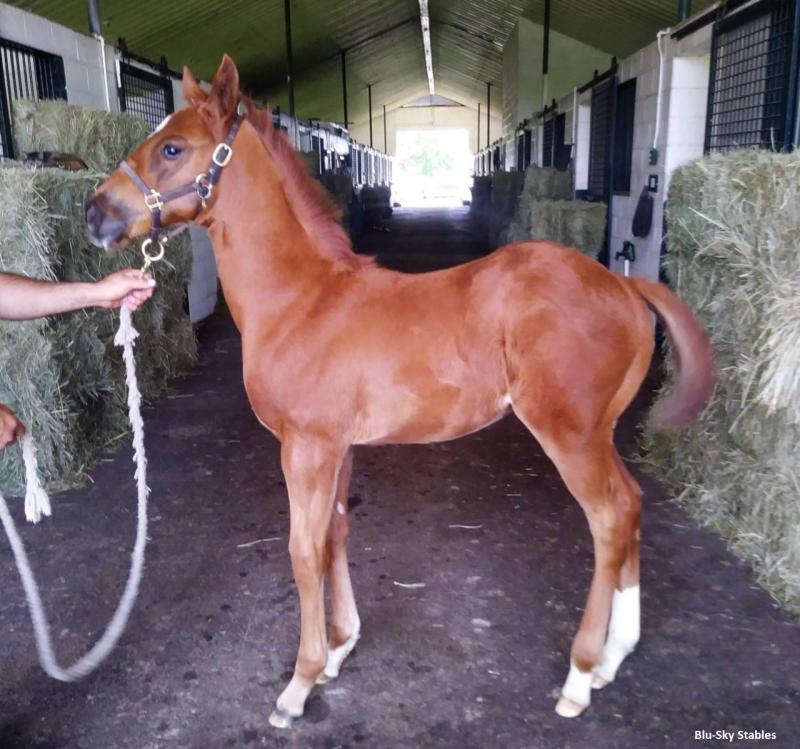 If you’re looking for the tug-at-the-heartstrings contender to root for in the 2020 Kentucky Derby (G1), one-eyed Finnick the Fierce qualifies on multiple levels. His dam came from a racehorse adoption facility, and he lost his right eye as a baby due to a congenital cataract. Bred by a college student, he races for his childhood veterinarian and his hitherto little-known trainer.

Finnick the Fierce’s story begins when Paige Gilster, then pursuing her degree at Iowa State, was interested in getting her first broodmare. As part of her studies in the equine program, she’d assisted at the Canterbury Park test barn, where she met Dr. Dick Bowman. Aside from being the longtime state veterinarian, Dr. Bowman operates his Second Chance Adoption Ranch for racehorses off the track.

Given Gilster’s shoestring budget, the Bowman Ranch in North Dakota was a useful place to search for a mare. The pool of suitable candidates was limited, but Dr. Bowman found three possibilities.

Southern Classic struck Gilster as the best bet, partly because she recognized marquee names in her pedigree like Halo, the male-line ancestor of her sire Southern Image. But Southern Classic’s maternal line was the clincher.

“Her dam’s side was what I fell in love with,” Gilster said.

Researching the female line, she discovered a sustained pattern of producing winners. Southern Classic’s dam, Stutz Classic, had seven winning offspring including Invitational, a stakes victress and runner-up in the 2005 Wonder Where S., the final jewel of Canada’s Triple Tiara.

Stutz Classic was in turn out of a stakes-winning stakes producer in Stutz Goldrush, whose dam, Sunny Morning, was responsible for seven winners. Four of them were stakes scorers including Stutz Bearcat, hero of 23 of 86 career starts. Another branch of descent from Sunny Morning flowered into such Grade 1 winners as November Snow and Morning Line.

“Everyone seemed to have a heart for racing,” Gilster summed up, a key point that she kept hearing when seeking out advice from industry professionals.

“You can have as much talent as you want, and if you don’t have any heart, you won’t go anywhere.”

Southern Classic’s racing career consisted of just eight starts at a fairly low level, but she won or placed in half of them before sustaining a soft-tissue injury. Her connections – trainer Bernell Rhone and his wife, Cindy, who was her owner – entrusted her to Bowman’s Ranch to help find a good forever home.

Few could have expected that home would ultimately be in the Bluegrass as the dam of a Derby contender. Once acquiring Southern Classic, Gilster first sent her to Iowa State stallion Newport, and the resulting foal, My Classic Port, was herself bred in the Hawkeye State. Then the mare moved to Kentucky to visit a much higher-profile consort.

Although Gilster was then a novice in the arcane arts of Thoroughbred pedigrees, she knew how to do her homework and develop criteria for the stallion.

Dialed In, the 2011 Florida Derby (G1) winner and beaten Kentucky Derby favorite, was on the short list of those meeting the requirements on paper. But the Darby Dan stallion stood out when Gilster and her dad, Jeff, went to see the candidates in person.

Jeff has been supportive of Paige’s venture every step of the way, since her initial formulation of a plan. With his business and marketing experience, he offers an added perspective to Paige’s growing horse knowledge, and their skill sets combine under the name of Blu-Sky Stables.

In their discussions regarding the choice of stallion, it came down to trusting their intuition:

“Our gut told us Dialed In.”

That gut instinct was spot on. After Southern Classic got in foal in the spring of 2016, Dialed In’s stock rose markedly as his first crop hit the track. His headliner, Gunnevera, captured the Saratoga Special (G2) and Delta Downs Jackpot (G3), lifting Dialed In to the champion freshman sire title.

Southern Classic’s foal arrived on April 22, 2017. He was a fine chestnut colt, in the view of veterinarian Dr. Arnaldo Monge of Hagyard Equine Medical Institute.

But one thing was wrong – his right eye, blighted by a cataract. So rare was his congenital malady that there wasn’t a straightforward treatment protocol.

“He maybe could see shadows for the first month or two,” Gilster said, before his eye grew progressively worse and more inflamed.

The colt had such a steely character that he coped amazingly well, and Gilster decided that he needed the name she had initially envisioned for a darker horse – “Finn.” A second syllable was tacked on to make it “Finnick” for when he had to be corrected, just as a parent’s reprimand can include the child’s middle name for sterner effect. 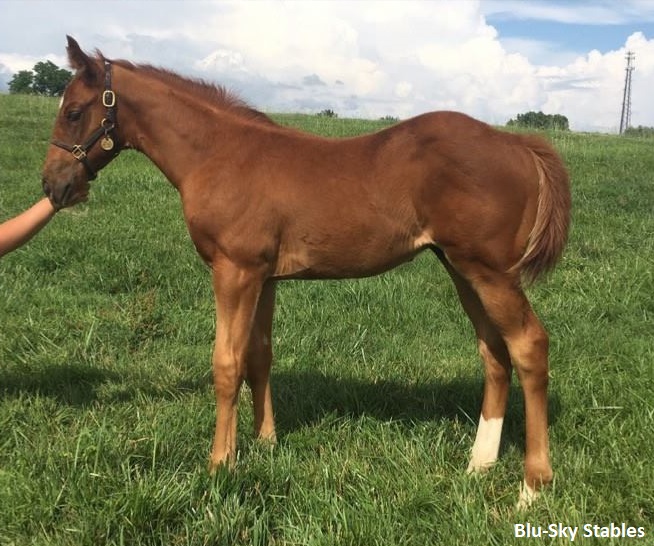 Gilster recounted an anecdote that reveals what a “strong, stubborn” baby Finnick was. His dam was not back in foal, and Gilster wanted to take her out to the round pen for an easy ride. Finnick of course was tagging along, and he marched straight through the line of trees despite being virtually blind on his right side.

As soon as he realized the situation in the round pen, though, he vetoed it. This exercise with mom did not have his approval, and he made sure to convey the message by blocking their path. Not even two months old yet, the spunky little guy imposed his will.

“He just stood there in the middle and stared at me,” Gilster said. “He got mad because he wasn’t doing what he wanted to do. He would come and stand right in front of her.

“You’re trying to take away my milkbag,” was his objection. “She’s mine, and you’re not going to do anything.

“My ride lasted all of about five minutes!”

Finnick also knew how to take care of himself when they were introduced to other horses in the field. He was careful to position himself so that his blind side was always next to his dam.

By the time Finnick was about eight months old, the eye problem had to be resolved. Experimental surgery would have put him through even more of an ordeal, so the best option for his health and happiness was to remove the eye.

A one-eyed horse was not exactly fitting the Blu-Sky Stables business plan, which was dependent upon selling the offspring. Gilster officially named him Finnick the Fierce, in hopes that whoever bought him would keep that nobler name, and not inflict a worse one on him because of his missing eye.

Eventually it wasn’t even worth going through the motions of the sales ring. Finnick was not going to be a commercially viable youngster.

But someone did want him – someone who had been with him literally from the beginning. Dr. Monge had been expressing an interest in Finnick.

“If you’re going to sell that horse, come talk to me,” Gilster recalled the veterinarian saying, and she was delighted that a deal could be worked out.

“I knew he was going to get a good chance – that’s what I wanted. I wanted him to have the best chance.”

Dr. Monge purchased Finnick privately for a reported $3,000 and sent him to Rey Hernandez to learn his early lessons.

Hernandez, originally from Guatemala, had worked his way up through long years of toil on the racetrack, including a stint with Elliott Walden. From hot walker, to exercise rider, and sometime jockey who rode 26 winners from 479 mounts, Hernandez had only begun his training career with one starter in 2016. By 2019, his stats increased to 145 starts, and 28 winners.

As Hernandez began working with Finnick, he saw potential, enough to buy a half-interest and become a co-owner with Dr. Monge. The gelding wasted no time in repaying them by winning his career debut at Indiana Grand last summer. Now he’s taken them on an incredible ride to the Derby. 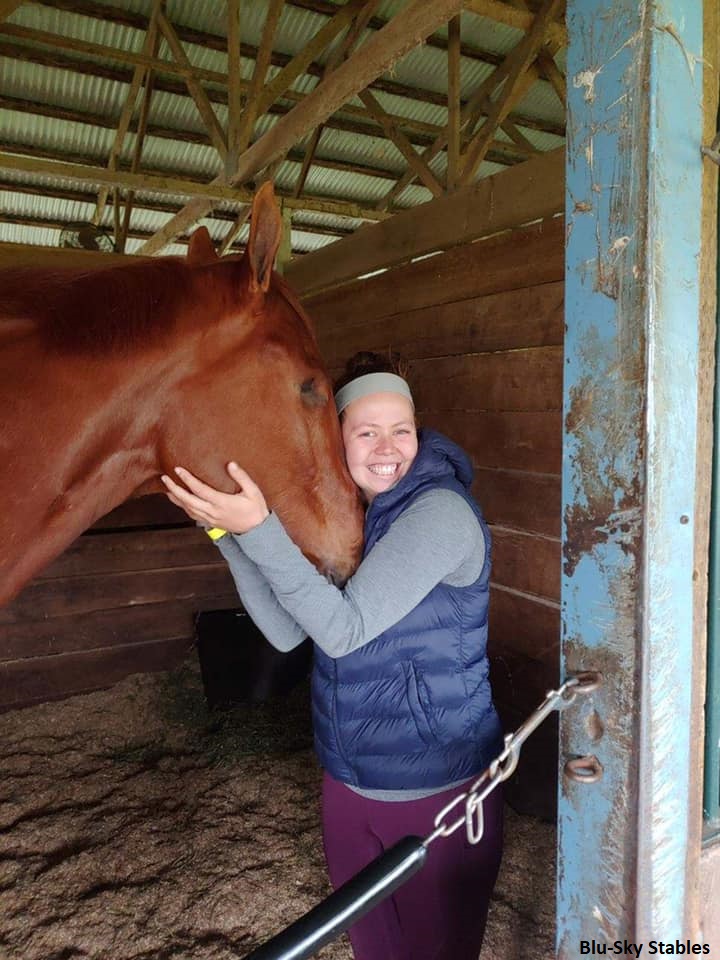 Gilster, now 24, has been on a progression of her own. Graduating the year Finnick was born, she is already carving out a career for herself in the breeding industry in the Bluegrass. She currently serves as assistant manager at Timber Town, where she cares for such champion mares as Havre de Grace and Songbird.

Southern Classic has also moved up in the world. The onetime rescue mare is in foal to champion Honor Code, sire of Finnick’s Derby rivals Honor A. P. and Max Player.

The very quality that Gilster was banking on in her female line, heart, has come through in spades in Finnick. He has adapted to navigate in race conditions, while proving capable of mixing it up with the best on his day.

Runner-up as an 87-1 shot in the Kentucky Jockey Club (G2) here last fall, Finnick headed Derby favorite Tiz the Law, who was suffering his only career loss in a troubled third. His other significant result on the trail was a third, at 62-1, to Nadal and King Guillermo in a division of the Arkansas Derby (G1).

His most recent seventh in the Blue Grass (G2) left Finnick uncharacteristically discouraged. Dr. Monge told Horse Racing Nation’s Tom Pedulla that dirt had clogged his one remaining eye during the race. Thus Finnick was unhappy because circumstances prevented him from running as hard as he could, as hard as he wanted.

“He looked defeated,” Gilster said. “He never looks like that – he always comes back proud and happy with himself.”

Perhaps Finnick will have a clearer chance to do himself justice in Derby 146. A sloppy track, as in the Kentucky Jockey Club, wouldn’t hurt either.

“Praying for rain!” Gilster said. “He loves it to rain!”

Finnick the Fierce will be a huge longshot on Derby Day, but that’s never bothered him before. After all, his whole life story is about beating the odds.

“Every single race, every single time he works, he goes out and tries his hardest.” 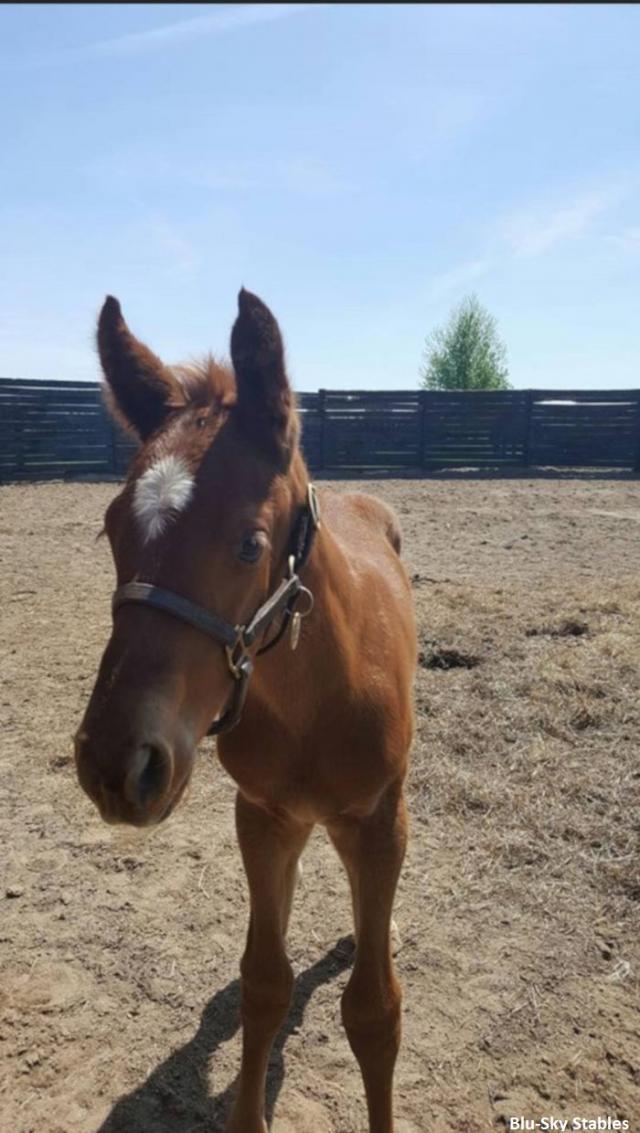