Tales from the Crib: Firenze Fire

Firenze Fire, the first foal of a mare claimed – against advice – for $16,000, has been a hard-trying overachiever for owner/breeder Ron Lombardi’s Mr. Amore Stable.

Lombardi knows all about training of the human variety as the president and CEO of SportsCare Institute. With around 70 locations in New York, New Jersey, and Florida, SportsCare offers a range of services from physical and occupational therapy to sports medicine, including for the NBA’s Brooklyn Nets and the NHL’s New York Rangers.

Lombardi’s initial venture as a Thoroughbred owner did not get off to an auspicious start. His first horse reportedly succumbed to injury before making it to the races, but Lombardi was undeterred. On the contrary, he memorialized that ill-fated horse by naming Mr. Amore Stable in his honor.

The stable first entered the national spotlight with Tightend Touchdown. Claimed for $35,000 in 2012, lost to other connections in a later claiming race, and then claimed back for the same $35,000 tag, Tightend Touchdown developed into a classy turf sprinter for Lombardi and new trainer Jason Servis. He was a familiar rival of Ben’s Cat, traded decisions with the beloved Marylander, and came close to a Grade 1 laurel when a dead-heat second in the 2013 Breeders’ Cup Turf Sprint (G1).

Lombardi’s claim of My Every Wish, who would become Firenze Fire’s dam, was not as successful at the time. Despite Servis’ attempts to dissuade him, Lombardi haltered the maiden filly for $16,000 out of a runner-up effort at Aqueduct on April 18, 2012.

“Everyone told me, ‘Don’t claim her,’” Lombardi told Teresa Genaro after Firenze Fire handed him his first Grade 1 in the Champagne (G1). “I always go against the odds. I’m a risk-taker.”

My Every Wish did not make another start. For five years, you could have thought that Servis and other like-minded counselors were proven right. But if she did in fact turn out to be a bust on the racetrack, Lombardi’s instincts won in the long run, for she gave him Firenze Fire.

“We claimed the mare,” Servis told NYRA publicity. “She was no good, so we put her in the barn for two years, and then Ron decided to breed her and here we are. It's a good story.”

Given My Every Wish’s pedigree, it’s not a shock that she has had success as a producer. She’s by the Danzig stallion Langfuhr, and her own dam, Mille Lacs, is a full sister to the prolific Oatsee. Honored as Broodmare of the Year for 2011, Oatsee is responsible for $3 million-earner Shackleford, that year’s Preakness hero (and now the sire of Promises Fulfilled); 2007 Alabama (G1) scorer Lady Joanne; and fellow graded stakes winners Afleeting Lady and Baghdaria.

Firenze Fire, the first registered foal from My Every Wish, is also from the first crop of Poseidon’s Warrior. The Mr. Prospector-line stallion scored his signature win as a 36-1 longshot in the 2012 Alfred G. Vanderbilt H. (G1) at Saratoga.

“From his early training as a two-year-old, he was always a solid and mature horse,” Lombardi said. “He was broken (under saddle) down at Webb Carroll and they did a tremendous job and gave him very high marks.”

Lombardi also explained the origin of the colt’s name.

“My daughter, Christina, has an Italian women’s shoe line and we were in Florence, Italy (Firenze) and I needed to name a few horses, so you got the Firenze part. Tom Hanks was filming the movie Inferno...there's the Fire part.”

But there’s not much fiery about the temperament of this cool customer.

“When he is in the paddock he is very calm and focused,” Lombardi said. “Nothing seems to bother him. Next weekend will be the real test of that, 170,000 fans – should be pretty crazy.”

Maybe not as crazy, though, as the story of claiming a filly who never runs, but who produces a Champagne winner and Derby competitor for you.

“Crazy ride,” Lombardi concluded. “Hopefully there are still a few chapters to be written.” 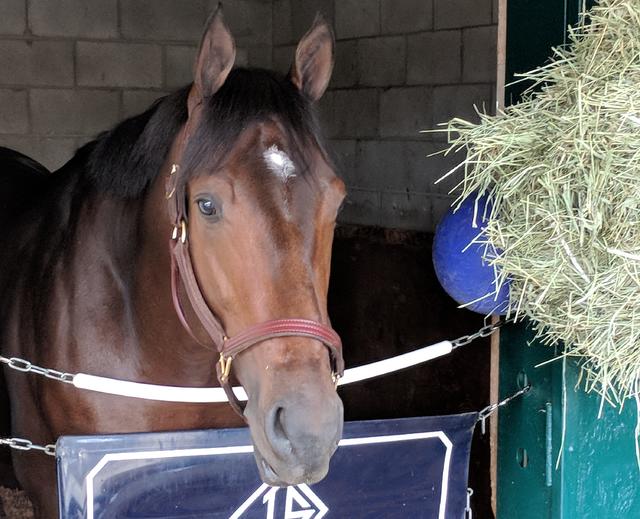