Tales from the Crib: Irap 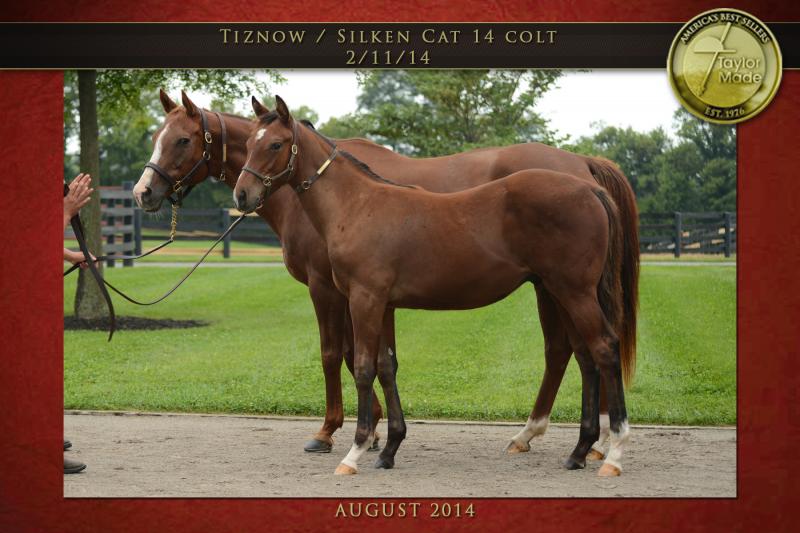 “When he got hooked in the lane, I thought for sure that Practical Joke was going by him. But that Silken Cat was so tough, and it came out in him.”

Thus Frank Taylor of Taylor Made Farm saw the influence of Irap’s mother, Canadian champion Silken Cat, in his upset victory in the Blue Grass S. (G2) at Keeneland.

Taylor also gave due credit to Irap’s sire, Hall of Famer Tiznow, as “a courageous, courageous horse.” Tiznow’s fighting spirit carried him into the record book as the only two-time winner of the Breeders’ Cup Classic (G1), after prevailing over European stars Giant’s Causeway (2000) and Sakhee (2001) in epic stretch duels.

It’s taken a while for Irap to live up to that pedigree, but the onetime “ugly duckling” has come around in time to book his ticket to the Kentucky Derby.

In the process, Irap has emerged as the latest standout bred by Marie Jones and her late husband, Aaron, who passed away about seven months after Irap was born. A noted philanthropist and lumber entrepreneur, Aaron bred and campaigned Lemhi Gold, the champion older male of 1982, and Tiffany Lass, the champion three-year-old filly of 1986. The Joneses also imported the high-class Brazilian Riboletta, who went on to earn an Eclipse Award as the U.S. champion older mare in 2000.

In subsequent years, the Joneses transitioned to selling their youngsters instead of keeping homebreds to race themselves. That program has produced such celebrities as Ashado, a Hall of Fame inductee and two-time Eclipse Award winner (2004-05); Drosselmeyer, hero of the 2010 Belmont S. (G1) and 2011 Breeders’ Cup Classic (G1); and Speightstown, Irap’s half-brother, who clinched an Eclipse Award in the 2004 Breeders’ Cup Sprint (G1) and now ranks as a successful sire standing under the Taylor Made/WinStar Farm banner.

Speightstown was the first foal from Silken Cat, Canada’s champion juvenile filly of 1995. Unbeaten from three starts at Woodbine that year, the Quebec-bred daughter of Storm Cat romped by eight lengths in her debut, by 14 lengths in an allowance, and by 3 1/4 lengths in the Mazarine S. for storied owner Sam-Son Farm.

Silken Cat was later purchased by Jones and transferred to California. She was third in a turf allowance at Hollywood Park in the summer of 1996, her only outing in Marie’s colors, and retired to the broodmare life at Taylor Made near Nicholasville, Kentucky, where the Joneses board their mares.

Beginning her new career by visiting Gone West, Silken Cat foaled the future champion Speightstown. Taylor, the vice president of boarding operations at Taylor Made, recalled that first baby was a handsome chestnut.

“Speightstown was inbred to Secretariat and looked like a mini-Secretariat – same build, color, markings, only smaller.”

Sold for $2 million as a yearling, Speightstown set the trend of Silken Cat’s beautiful babies commanding big prices at auction. Unfortunately, his superb career on the track didn’t set a trend for her ensuing offspring.

“She had a lot of good-looking foals, but had some bad luck with them,” Taylor recalled. “One ran into a fence, one was struck by lightning.

“One of my favorites out of her was a full sister to Irap, one of the best-looking fillies I’ve ever seen. But she got an eye infection, didn’t run. That filly was just gorgeous.”

That older full sister went for $1.75 million as a Keeneland September yearling in 2013. Purchased by Three Chimneys Farm and eventually named Amour d’Ete, she’s now a broodmare herself.

Silken Cat returned to Tiznow, and the resulting foal was Irap. Taylor’s daughter Katie posted this picture to Facebook of her daughter, Mary Emily, with the newborn “2017 Kentucky Derby winner.”

Taylor explained that he likes how Tiznow and Storm Cat mares match up physically. His theory was backed up on the racetrack when Folklore, bred along those lines on Taylor’s advice, became champion two-year-old filly of 2005.

Marie Jones loved the “marriage” between Silken Cat and Tiznow, a “marvelous” and “amazing” horse whom she’d seen on the backstretch at Santa Anita during his racing career.

“He had the heart, he wanted to win,” she said of the iron-willed Tiznow.

Silken Cat wasn’t lacking in that department either.

“She changed her personality after she began foaling,” Jones recalled, adding that Silken Cat could be “warmer” but she was “always protective of her foals. Always a good mom.”

Taylor, who called Silken Cat “one of the best mares ever,” described her as having a “tough mindset” with a “cantankerous” streak.

But if she didn’t have a foal by her side, Silken Cat wouldn’t board. You’d just have to walk.

“I had to lead her down to the breeding shed to visit Unbridled’s Song,” Taylor reminisced of a past rendezvous.

Silken Cat’s strong will may have prolonged her life. Taylor explained that she had foundered – came down with the dread disease laminitis. And the then-21-year-old mare hemorrhaged during her difficult time foaling Irap.

Jones was able to watch it all unfold from her Oregon home, thanks to the TV monitors Taylor Made has set up at the farm. Once alerted that one of her mares is about to give birth, she can tune in to see the miracle of life.

But this time, she knew something was wrong.

“It was wrenching,” Jones said. “I could tell she was laboring.”

It was touch and go for a while, so much so that Taylor expected a nurse mare might have to be brought in for baby Irap. Yet Silken Cat pulled through to raise what would be her last foal – a “really good foal,” in Taylor’s phrase.

Taylor Made’s Laura Donnell regularly photographs every horse on the farm, so the owners can keep up with their horses’ development.

Those photos of Silken Cat’s baby meant a lot to Aaron Jones, a bright spot as he entered the final stages of his illness.

“He was very special to Aaron – such a personality,” Marie noted.

“He got a little heavy, as weanlings and yearlings can do.”

Taylor joked that’s why the colt’s barn nickname was “Frank” – because he got fat.

“It was a poke at Frank because he was so stubborn,” Mark Taylor recounted. “He was a horse you had to push everywhere, drag him in and out of the barn.

“All the guys at the farm have been laughing hysterically that he’s become this great horse because he was a real grumpy, stubborn, lazy horse who never wanted to do anything.”

Frank takes up for his namesake, pointing out that he “never was really a bad horse. He wasn’t terrible.”

As Taylor further explained, sometimes when foals have to interact with humans more – such as when they’re on nurse mares, or if their dams are having health problems – the more idiosyncratic characters they can become.

“They think that they’re a person. They become a little ornery.”

By the time the yet-unnamed colt was offered at the Keeneland September Yearling Sale, the pretty baby had reached an ungainly stage.

“He went through a real ugly duckling phase as a yearling, got out of balance,” Taylor said.

Between that, and his being out of an older mare, the very discriminating buyers weren’t overwhelmed by him. The top bid was $140,000 – modest for a horse of his pedigree, and accordingly less than the reserve price set by the seller.

Although the colt was led out from the auction ring unsold, he’d caught the eye of Bobby Dodd, well respected for his “pinhooking” – snapping up prospects whom he’d resell as two-year-olds.

Dodd, on behalf of Brad Grady’s Grand Oaks, acquired the yearling privately. Grady and Dodd were employing a similar plan for another yearling purchase, a Tale of Ekati colt, who was earmarked for the two-year-old sales. That colt ended up not making his sales engagements, Grady kept him, and now we know him as Girvin – the Louisiana Derby (G2) winner and Kentucky Derby points leader. Thus for a time, Irap was a stablemate of his future Derby rival.

Unlike Girvin, Irap did get to auction at two. He was cataloged in the 2016 Ocala Breeders’ Sales Company March Sale, where he breezed a furlong in :10 1/5 at the under tack show. No longer an awkward yearling, he was blossoming into an attractive juvenile.

Dennis O’Neill, trainer Doug O’Neill’s brother, had to go to $300,000 to purchase him on behalf of Reddam Racing. Those are the same connections that brought us Derby winners I’ll Have Another (2012) and Nyquist (2016).

The day before Irap was sold, the 23-year-old Silken Cat died in her paddock at Taylor Made.

Silken Cat has left an enduring legacy through Speightstown, her firstborn, and now her last baby, Irap, is adding another chapter.

The farm Facebook page, which described her passing as peaceful, included a prescient line:

“Her career as a broodmare ends as it began, with the promise of an exceptional colt.”

Irap is beginning to fulfill that promise. Frank Taylor was bowled over when he saw him in the Keeneland saddling enclosure ahead of the Blue Grass.

“Holy crap! He grew up – big, good-looking, everything we’d hoped he’d be.”

“I had a little money on him,” Taylor said. “And I’m gonna bet him again in the Derby.”