Tales from the Crib: King Guillermo 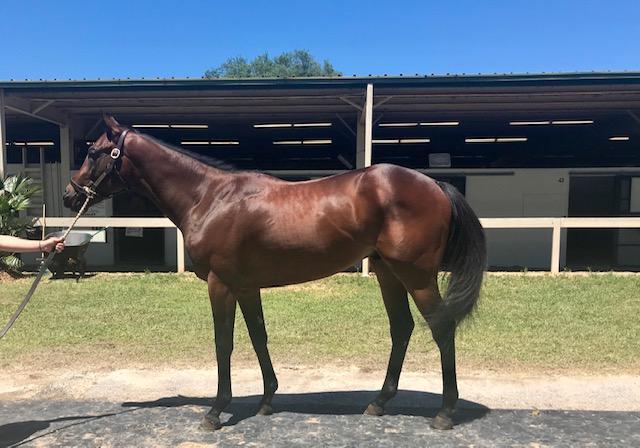 King Guillermo launched himself on the Kentucky Derby (G1) trail as an underdog who came out on top, but that’s just part of his appeal. Owned by retired Major League Baseball All-Star Victor Martinez, the colt is named in honor of his late father. The family theme runs through his story, as does a bid for an exceedingly rare accomplishment in the Thoroughbred breeding world.

The 49-1 upset winner of the Tampa Bay Derby (G2), King Guillermo was no longshot at birth. On the contrary, the well-bred youngster hails from global powerhouse Coolmore’s North American arm, Ashford Stud, now known as the home of Triple Crown winners American Pharoah and Justify.
King Guillermo’s sire, champion Uncle Mo, is himself a high-profile stallion at Ashford. In 2016, the year King Guillermo was conceived, Uncle Mo was already off to a fantastic start at stud. The leading freshman sire had a champion son in Nyquist, who captured the 2015 Breeders’ Cup Juvenile (G1) and turned the elusive double in the 2016 Kentucky Derby.
King Guillermo’s dam, Slow Sand, was acquired from the internationally renowned Wertheimer et Frere operation. Although unplaced in her only two starts, Slow Sand had a fine pedigree as a daughter of Dixieland Band and the stakes-winning Seattle Slew mare Slow Down. After spending the first several years of her broodmare career in Ireland, Slow Sand was repatriated.
Her first registered foal back home in Kentucky was King Guillermo, bred by the partnership of Carhue Investments, Grouseridge Ltd., and Marengo Investments. Marengo is best known for being involved in the breeding of an Epsom Derby hero – Authorized, the champion European 3-year-old of 2007.
Dermot Ryan, manager of Ashford, commented on that Epsom connection.
“Two of his co-breeders, Harry King and David O’Loughlin, also co-bred the 2007 English Derby winner Authorized. It would be an incredible feat if they bred the winner of the Kentucky Derby as well.”
Indeed, King and O’Loughlin, who both have roles at Coolmore’s Irish headquarters, would join an exclusive club of breeders of Epsom and Kentucky Derby winners.
Since Sir John Robinson was responsible for 1917 Kentucky Derby hero *Omar Khayyam and 1923 Epsom star *Papyrus, such titans of the sport as E.P. Taylor, John Galbreath, and Paul Mellon have accomplished the double. Taylor’s 1964 Kentucky Derby legend, Northern Dancer, also furnished his Epsom conquerors Nijinsky II (1970), The Minstrel (1977), and Secreto (1984), who edged fellow Taylor-bred favorite El Gran Senor. Galbreath had two homebreds take the Run for the Roses, Chateaugay (1963) and Proud Clarion (1967), followed by Roberto (1972) at Epsom. Mellon bred and raced one of the all-time greats in Mill Reef, the 1971 Epsom Derby victor, and in his twilight years added the Kentucky Derby with Sea Hero (1993).
Dreams of history would have been far off when the Uncle Mo-Slow Sand colt arrived at Ashford on Feb. 6, 2017, but the bay was a fine foal.
“King Guillermo was born and raised here at Ashford and was very straightforward from day one,” Ryan recalled. “He was all quality and very correct - just a lovely horse, very laid back, and a pleasure to be around.” 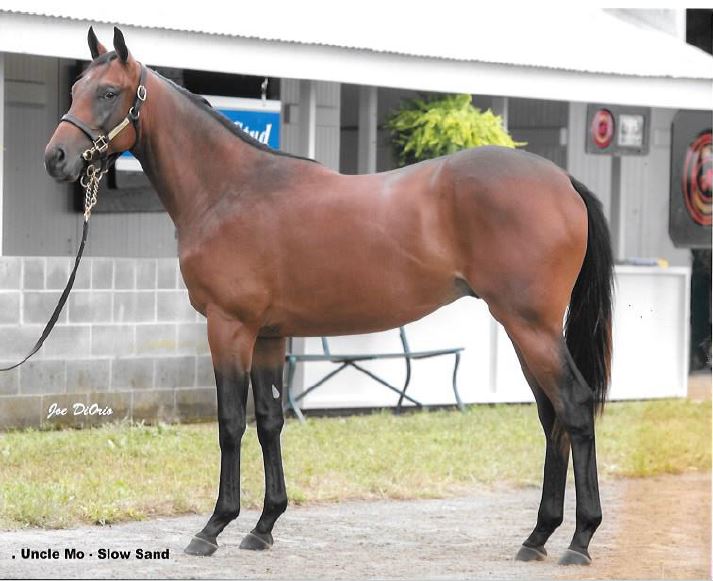 As a yearling, King Guillermo was offered at Keeneland September by Padraig Campion of Blandford Stud. Cataloged as Hip No. 421, the colt had promise and drew some attention, but he faced stiff competition in the ultra-fashionable Book 1.
“King Guillermo was quite popular,” Campion recalled, “even though he was a bit immature and a cribber at the 2018 Keeneland September Sale. However he had a lovely frame and looked like a horse for the future.”
Prospective buyers are exacting when evaluating prospects, even more so in the premier portion of the sale. As his time in the auction ring approached, it was becoming clear that King Guillermo wasn’t making the grade. Bidding stalled at $90,000 – not enough to meet the reserve price set by the seller.
But buyers and sellers often reach agreements privately in the aftermath, and that’s how King Guillermo was picked up by Katie Cauthen.
That name is well known to Derby fans. Katie’s brother-in-law is Steve Cauthen, who guided 1978 Triple Crown champion Affirmed during his illustrious career in the saddle. Steve’s brother Doug has built his own extensive resume in the bloodstock industry.
Doug’s wife, Katie, plays an integral role in their consulting firm, and she comes from a well-respected family herself. Her father, Bill Recio, is the impresario of Lynwood Stable in Florida where such champions as Honor Code and Songbird received their early education. Katie’s brother Gene has taken over at the helm of Lynwood, which is named after their mom, Lynn.
Katie Cauthen puts her expertise to work in scouting out the sales. Her clients include Erik Johnson of the NHL’s Colorado Avalanche, who has an interest in finding horses like King Guillermo – those listed as “RNA” or “reserve not attained.” There are bargains to be found, and a potential for profit if re-offered at the following spring’s 2-year-old sales.
“Erik Johnson and I used to ‘RNA chase’ at sales,” Cauthen said. “He was always playing hockey during the September Sale, so when he had a break from practice, he would look the RNA’s up and send them to me. The thrill of the hunt is pretty exciting.”
Cauthen had already inspected King Guillermo before he’d gone through the ring.
“She had seen him a few times and I knew she liked him,” Campion recalled.
“King Guillermo was a ‘yes’ when I looked at the page,” Cauthen said. “He was athletic and by the right sire, Uncle Mo, who I love! He was very athletic, good size, good bone. He was pretty professional and not rambunctious or coltish; he was there to do what was asked of him.”
Aside from the colt’s own good points, Cauthen was highly complimentary of Campion, a “great horseman” to have involved in the process.
“Mr. Campion always brings very nice athletes to the sale. Knowing that a horse had a good beginning, raised the correct way, always gives you a bit more confidence.”
With the seal of approval from Bill Recio, and passing muster by Dr. True Baker, King Guillermo was purchased. Recio himself came in for a share of the colt along with Cauthen and Johnson. 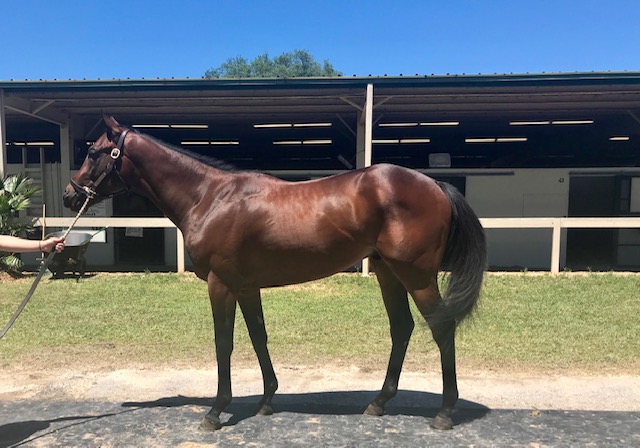 King Guillermo was sent to Lynwood to learn the ropes, and his demeanor made him a good student.

“That personality carried through during the breaking process,” Cauthen said. “King Guillermo loved his job, was pretty easy to get along with and was always professional.”
Gene Recio recalled that King Guillermo was a “very simple” horse to handle, with an “eat, sleep, train, relax” agenda.
“He was a big, good-looking Uncle Mo. He just had a lot of life to him.
“He’s a horse I’ll never forget because when you would feed him, he would rear up, hoot and holler. It was a spectacle that everybody wanted to watch him eat.”
That was a sign of a horse “thriving in training,” a regimen that he enjoyed.
“He tried really hard every day, put a lot into his training,” Recio said.
The juvenile was ready for his next appearance at the OBS April Sale, where he was consigned by Gene on behalf of the family’s partnership. Working a furlong in :10 1/5 at the under tack show, the colt had come some way since his yearling days. But he still wasn’t setting the sales ring alight, and once again he was led out unsold as an RNA.
Another private deal would be struck afterward, this time with a professional athlete from another sport. Martinez, who’d retired from his 16-year MLB career after the 2018 season, was just buying his first racehorses. Fellow Venezuelan expat Juan Carlos Avila, a top trainer in their homeland, had set up shop stateside, and the two teamed up in search of prospects at OBS.
They were able to buy the Uncle Mo colt for $150,000, and now he became part of the Martinez family. Martinez was only a child when his father, Guillermo, died, adding more poignancy to his naming the colt King Guillermo in tribute. He races under the banner of Victoria’s Ranch, the Florida property owned by Martinez and his wife, Margret, and referring to their three daughters who all have Victoria as their middle name.
King Guillermo is taking an unusual approach to the Derby. Instead of having a recent prep, he will be entering fresh from a four-month holiday, after a solid second to Nadal in an Arkansas Derby (G1) division on May 2. But his signature win in the Tampa Bay Derby came off a three-month vacation.
If King Guillermo can hit a home run at Churchill Downs, it would be a grand slam of story lines – breeding history, heartwarming family ties, sports crossover appeal, and a boon to the people of Venezuela, who celebrated a famous Derby upset with Canonero II in 1971. Whatever his odds, the easy-to-root-for colt will have a big cheering section. 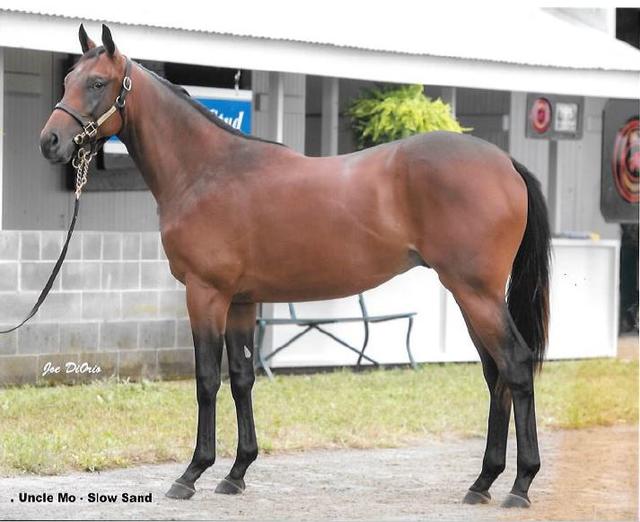