Tales from the Crib: Mendelssohn 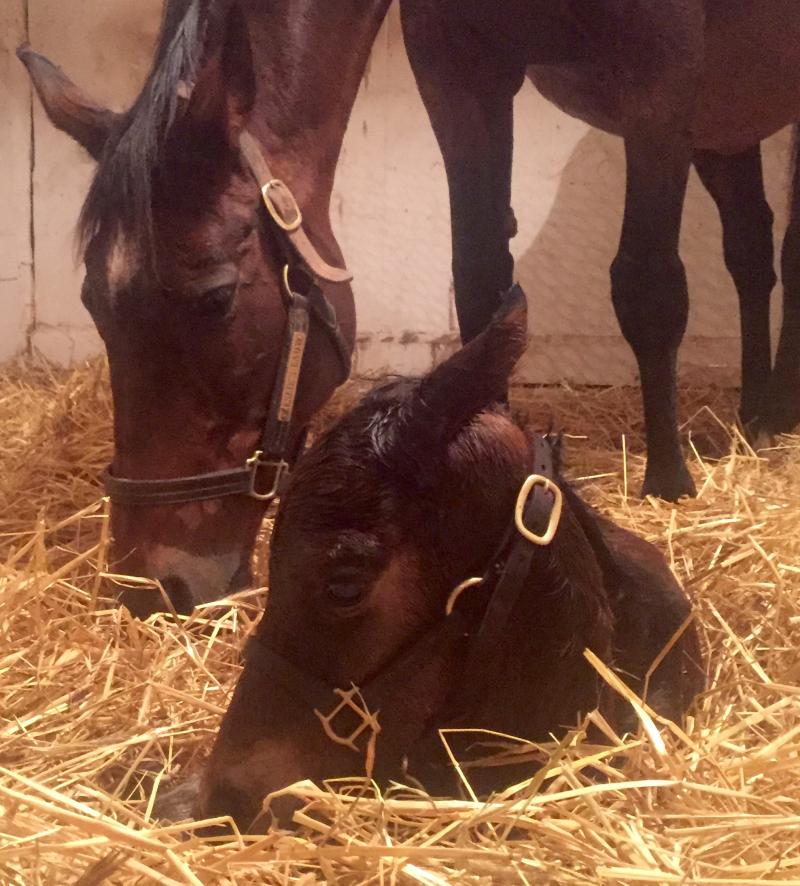 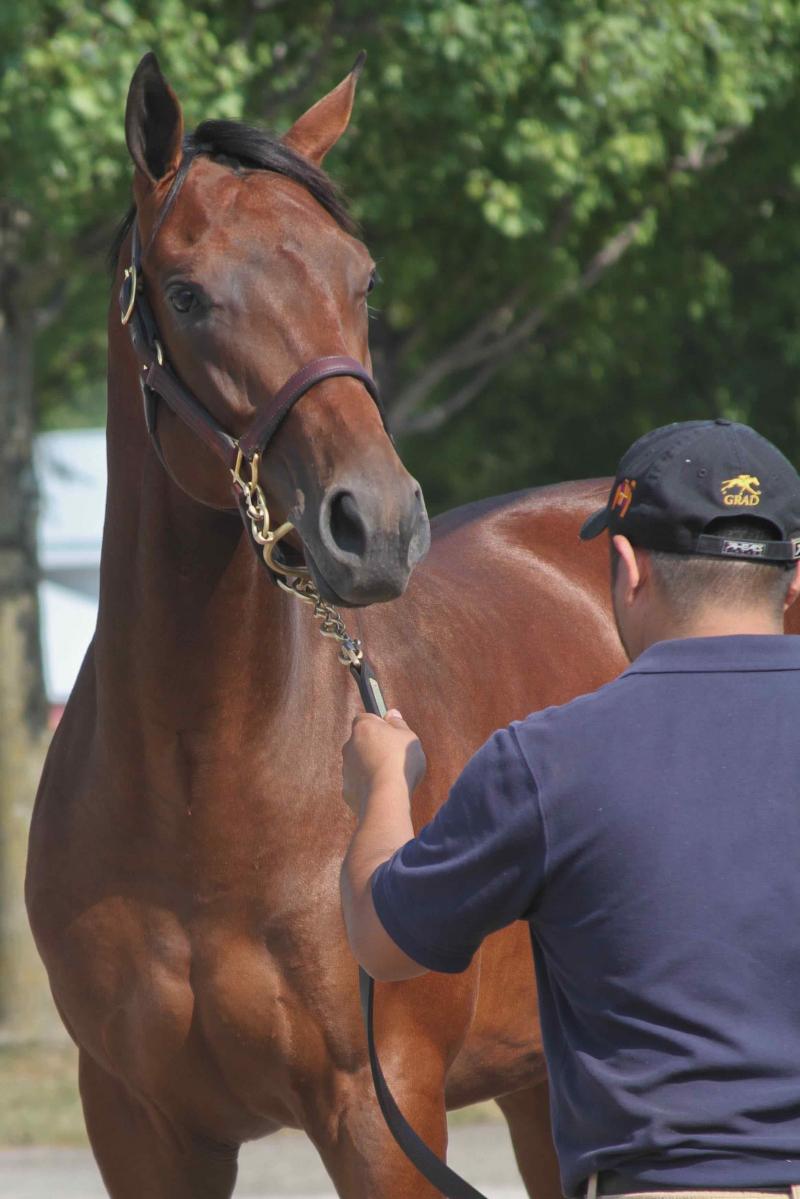 Although Mendelssohn aims to become the first European shipper to plunder the Kentucky Derby (G1), and the first to use the UAE Derby (G2) as a path to glory at Churchill Downs, he’s no exotic foreigner.

On the contrary, he’s a Kentucky-bred half-brother to multiple champion Beholder. Born and raised on a Bluegrass farm dating back to the Colonial and Revolutionary War era, Mendelssohn was the $3 million show-stopper at the 2016 Keeneland September Yearling Sale. And we’re very lucky that he even exists, for it took a twist of fate to bring him into the world.

Like his famous half-sister, Mendelssohn is a product of Fred and Nancy Mitchell’s Clarkland Farm near Lexington, Kentucky. Nancy’s daughter, Marty Buckner, is likewise deeply involved in the day-to-day running of the property, held by her mother’s family since 1774. As the name suggests, it was a Clark forebear who received the farm, reportedly on account of his military service in the French and Indian War.

Clarkland has been home to a number of notable winners, from 1931 Preakness hero Mate, who spoiled the Triple Crown bid of Twenty Grand, to more recent stars like Hall of Fame sprinter Housebuster.

But a mare bought for the relatively modest sum of $100,000 has put Clarkland on the map like no other. That mare was Leslie’s Lady, a minor stakes winner for owner James T. Hines Jr. (best known for campaigning Lawyer Ron). Already retired to the broodmare life by the time of Hines’s passing, she was offered by his estate at the 2006 Keeneland November Breeding Stock Sale, and purchased by Clarkland.

Leslie’s Lady soon appeared to be a brilliant acquisition. Her Hines-bred two-year-old colt named Into Mischief emerged as a divisional leader in 2007 when capturing the CashCall Futurity (G1). He promised to make an impact on the 2008 Derby trail, but unfortunately was sidelined. Into Mischief went on to become a hot sire at owner B. Wayne Hughes’ Spendthrift Farm, and he’s responsible for a major contender this year in Florida Derby (G1) romper Audible.

Then Leslie’s Lady produced an even better runner in 2010 – Beholder. Bred by Clarkland, and also bought by Spendthrift for $180,000 as a yearling at Keeneland September, Beholder compiled a Hall of Fame-worthy career boasting three Breeders’ Cup victories and four Eclipse Awards.

Fred Mitchell, for one, would not have foreseen Leslie’s Lady becoming such a fantastic broodmare.

“I cannot believe a Tricky Creek mare has produced the way she has,” Mitchell said, referencing her blue-collar sire more associated with speed than top-class routers.

The next few years were not as fortunate for Leslie’s Lady. Her foal right after Beholder, a 2011 colt by Curlin, showed high ability in workouts. But the $300,000 Keeneland September seller, named Curlin to Mischief, never made it to the races after a freak mishap.

“He stuck a leg over the webbing as an early two-year-old and did something to his tendon,” Mitchell recalled of Curlin to Mischief, who is getting a chance at a stud career in California.

After going barren in 2012, Leslie’s Lady foaled another Curlin in 2013, a filly who commanded $1.1 million at Keeneland September. Dubbed Leslie’s Harmony, she placed once from two starts.

The saddest turn of events came with her 2014 foal, a filly by Eskendereya. Very sick with colic, the baby had to be hospitalized, and mom was accordingly with her.

In the meantime, Leslie’s Lady had been bred to Scat Daddy after delivering her Eskendereya filly, and scanned in foal with an early due date for 2015. Unfortunately she was fretting in the hospital, and that took a fatal toll on her pregnancy.

“She absorbed the foal,” Mitchell said.

“The mare likes to have a buddy,” he added regarding the reason for Leslie’s Lady’s unhappiness. “She was upset in the hospital.”

Her Eskendereya filly made it out of the hospital and back to the farm, only to pass away there at the tender age of three months.

Although the breeding season was getting on, and it was now May of 2014, there was still time to send Leslie’s Lady back for another visit with Scat Daddy. The Coolmore stallion had particular appeal as a scion of the Storm Cat male line that had worked so well with Leslie’s Lady in the past. Both Into Mischief and Beholder were by Storm Cat-line sires. Because Scat Daddy was making his mark as a top-flight international sire, it was very much worth seeing what kind of horse he could get from Leslie’s Lady.

Thankfully, Leslie’s Lady got back in foal to Scat Daddy, this time with the colt we now know as Mendelssohn. But this came about only after the illness of his ill-fated half-sister. If that hadn’t happened, Leslie’s Lady would likely have carried that first pregnancy to term. Who knows how that Scat Daddy baby might have turned out, but it would not have been Mendelssohn.

Mitchell described going back to look at photos, particularly one with the colt peering over the barn door, and being struck at how he was “almost identical to Beholder” – the eyes, the head – “can’t hardly tell the difference between Beholder and him.

“He was probably a little smoother individual,” he added, admitting that was splitting hairs since Beholder was lovely herself.

In another similarity, Beholder had been a May foal as well. She began coming to hand just as the Clarkland team started prepping her for the yearling sale, and it was the same story with the Scat Daddy colt as he began his sales prep in the summer of 2016. 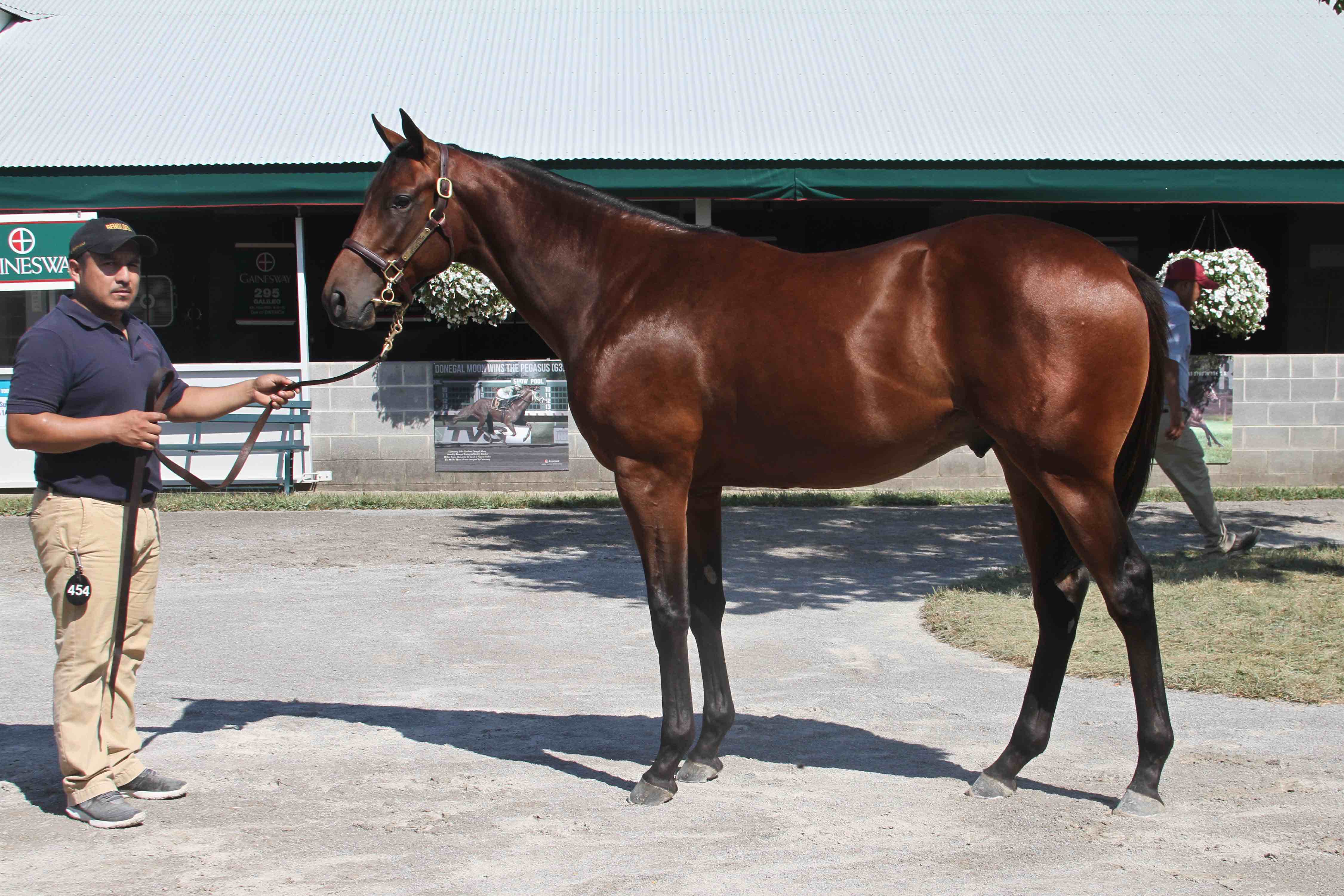 But Fred’s brother Bill Mitchell, “a high-class judge of Quarter Horses and Paints,” was bowled over the colt, and praised him in unstinting terms:

“Fred, this is the best horse you’ve ever had on the farm.”

The yet-unnamed colt had a drop-dead gorgeous conformation, plus a first-class mind, as evidenced by how he handled the Keeneland sale experience. Subjected to inspections for about five days, he showed like a pro, walking on cue, not having to be pulled or pushed into position, all the while with his head and ears erect.

“He was about like Beholder,” Mitchell summed up. “Both horses were just a pleasure to take to the show ring.”

The colt was a white-hot commodity in the Keeneland sales pavilion. Spendthrift was keenly interested as the owner of both Beholder and Into Mischief, but so was Coolmore – all the more so since they had lost Scat Daddy to an untimely death in December 2015. Now it wasn’t just a case of scouting out smart prospects by a Coolmore sire, but looking for potential heirs from a limited supply.

The bidding accordingly kept on and on, until he became the overall Keeneland September topper, and the priciest yearling sold at a North American public auction in 2016.

“I don’t think I had ever seen a yearling in the ring as long as he was,” Mitchell said, admiring how he just stood there calmly and took it all in.

Leslie’s Lady has made a Coolmore connection of her own. After visiting Darley patriarch Medaglia d’Oro, sire of her now-yearling colt, she went to Triple Crown champion American Pharoah, who stands at Coolmore’s Ashford Stud near Versailles, Kentucky.

The 22-year-old mare was officially due on April 3, but Mitchell revealed that she tends to go two or three weeks later. So the Clarkland team is still patiently awaiting her American Pharoah baby.

“She looks like she’s 10 or 12 years old. Round, plump. Doesn’t look like an old mare,” Mitchell said as he watched her out in the paddock.

“Leslie’s going to leave her mark before she’s done.”

Now it’s just a question of how unique a mark for Leslie’s Lady, who was honored as the 2016 Broodmare of the Year. No mare has produced a Kentucky Derby victor in addition to another Breeders’ Cup-winning offspring. Mendelssohn bids to make history at Churchill Downs not just for himself, and trainer O’Brien, but for his dam as well.