Tales from the Crib: My Boy Jack

My Boy Jack’s bargain yearling price belies his pedigree as well as his birthplace. He was bred by former Kentucky Governor Brereton Jones and raised at his Airdrie Stud, whose roots go back to the most illustrious Bluegrass farm of the 19th century.

Airdrie embraces a substantial tract of the land that once belonged to Woodburn Stud, the cradle of the Kentucky Thoroughbred as the residence of breed-shaping sire Lexington. Although his stud career spanned the carnage of the Civil War, when his progeny were casualties themselves, Lexington ranked as leading sire an astounding 16 times.

After the arrival of the Kentucky Derby on the racing calendar in 1875, Woodburn was prominent on its honor roll as a breeder. Proprietor A.J. Alexander bred four Derby winners – Baden-Baden (1877), Fonso (1880), Joe Cotton (1885), and Chant (1894) – and was responsible for a fifth. The dam of His Eminence (1901) was sold, however, while carrying the future Derby winner.

Woodburn was also deeply intertwined with the other American classics. Alexander not only bred Preakness winners; he actually bred the horse Preakness, namesake of the race that became the middle jewel of the Triple Crown. And Woodburn was a particularly prolific source of Belmont S. (G1) winners. But after Alexander’s heir gave up Thoroughbred breeding in favor of raising cattle in the early 20th century, the Woodburn name receded into racing history.

Acreage from old Woodburn would be reclaimed at last for the Thoroughbred when Airdrie was established in 1972 by Jones and his wife, Libby, a descendant of Alexander on her maternal side. The Airdrie name itself harkens back to the Alexanders’ estate in Scotland. The Joneses enhanced the connection when adding a nearly 500-acre Woodburn property to its holdings in 2002.

Airdrie has become a force as a stud farm and nursery. Jones himself campaigned two homebred Kentucky Oaks (G1) winners, champion Proud Spell (2008) and Believe You Can (2012), both by the late Airdrie stallion Proud Citizen. He also bought and raced a third Oaks winner, Lovely Maria (2015), a daughter of current Airdrie stallion Majesticperfection.

In a pattern reminiscent of how Jones bought into Littleprincessemma’s family, he purchased My Boy Jack’s granddam, Gold N Delicious, for $310,000 as a broodmare at Keeneland November in 2004. Gold N Delicious was a John Franks homebred who won or placed in 21 of 27 starts, including 10 stakes. The $529,108-earner notably captured the 1997 Fleur de Lis H. (G3) at Churchill Downs and placed in such historic events as the Coaching Club American Oaks (G1) and Delaware H. (G3).

Gold N Delicious’ first eight foals all won, but her ninth and last by Mineshaft, Gold N Shaft, never made it to the racetrack or the worktab. A late foal born May 12, 2007, Gold N Shaft was kept on as an Airdrie broodmare. In 2014, Gold N Shaft was bred to one of Airdrie’s most exciting young stallions, Creative Cause.

By the great Giant’s Causeway and out of millionaire Dream of Summer, heroine of the 2005 Apple Blossom H. (G1), Creative Cause was among the elite performers of his crop. As a two-year-old, the gray won the 2011 Norfolk (now known as the FrontRunner) (G1) and Best Pal (G2) while placing in the Del Mar Futurity (G1) and Breeders’ Cup Juvenile (G1). After annexing the San Felipe (G2) at three, beating Bodemeister, Creative Cause came within a whisker of I’ll Have Another in the Santa Anita Derby (G1). Yet he did not duplicate that form when renewing rivalry with them in the classics, finishing fifth in the Kentucky Derby and third in the Preakness (G1) in what turned out to be his final start. Four years later, Creative Cause’s full brother, Destin, would come much closer as the near-misser in the 2016 Belmont.

Thus the Creative Cause-Gold N Shaft colt, born on January 26, 2015, was the offspring of nicely-bred parents looking to establish themselves as breeding stock. Pull the lens further back, and you see the cross of a Storm Cat-line sire over an A.P. Indy-line mare. 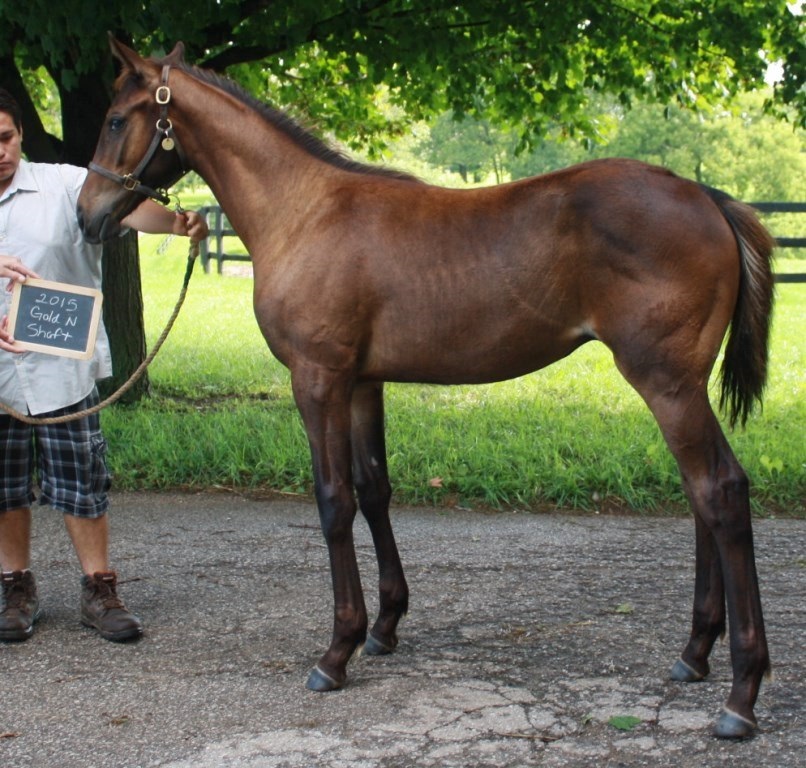 “He was a nice foal here at the farm, well behaved, nice mannered,” Airdrie General Manager Ben Henley said of the colt we know as My Boy Jack.

Offered as a weanling at Keeneland November, the bay did not attract any notice and was led out unsold for a mere $14,000. He returned to Airdrie to grow up and prepare for a crack at a yearling sale, Keeneland September.

This time the yet-unnamed colt was consigned under the banner of Tommy and Wyndee Eastham’s Legacy Bloodstock. But again, there was simply no interest. Nobody was looking at him.

“We were a little bit shocked about that,” Henley said. “He was a nice, athletic colt.”

Expecting that no one was going to buy him, the Airdrie team set his reserve price at $19,000, with the plan being to keep and race him.

“Then lo and behold,” Henley said, “Keith Desormeaux was in the back ring.”

The trainer spotted him, sized him up, and promptly made the winning bid at $20,000.

“It’s extraordinary,” Henley commented on how Desormeaux does it. “He’s picking them out of the back ring, seeing horses five or 10 minutes before he buys them.”

Compared to the usual practice of exhaustive inspections, vetting, and scans, Desormeaux’s technique smacks of a hunch play. But he knows exactly what he’s doing, grounded in good old-fashioned Cajun horsemanship.

“He’s a different kind of buyer,” Tommy Eastham noted. “He stays in the back ring, goes by instinct because he’s a good horseman.”

Eastham only had the colt for about 2 1/2 days during the sale, but that was long enough for him to see what this youngster was about.

My Boy Jack took to it without ruffling a feather – one of those that made you forget he was even in the barn.

“He was no problem, just took care of himself, ate. Great walker, took everything in his stride.”

In that respect, the colt had the prerequisite to make it on the track.

“If a horse doesn’t have a mind,” Eastham emphasized, “he’ll never become a racehorse.”

And “Jack” clearly had the mind. Bought in the name of Don’t Tell My Wife Stable, he brought Monomoy Stables on board before his career debut, and he just added another partner, West Point Thoroughbreds, to his ownership group ahead of Derby 144.

Under Desormeaux’s tutelage, My Boy Jack has been hardy enough to race 10 times since last June and blossom throughout the activity. He’s also won stakes on both dirt and turf, a versatility that reflects Creative Cause’s influence.

With his oldest runners still just four, Creative Cause is already siring major winners across both surfaces and a range of distances.

Might he have received the torch from his recently deceased sire, Giant’s Causeway? Is Creative Cause emerging as heir apparent?

“That is the goal!” Henley summed up.

My Boy Jack would fuel those hopes with a bold showing on the first Saturday in May.

Photo of My Boy Jack, at approximately 5 1/2 months old, courtesy of Airdrie Stud