Tales from the Crib: Plus Que Parfait 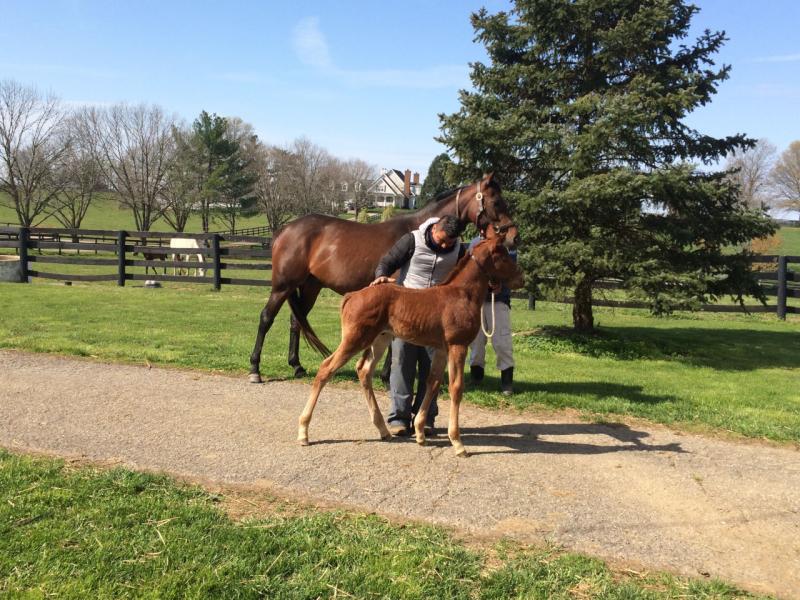 Plus Que Parfait with his dam, Belvedera, at Oak Lodge (Photo submitted by Calloway Stables) 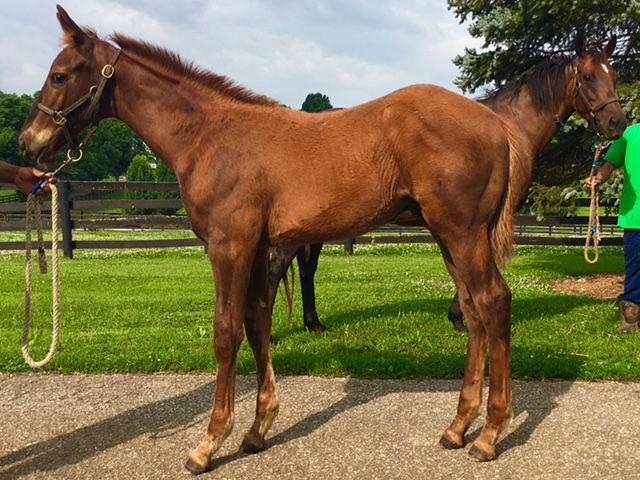 Plus Que Parfait is a case in point that a Kentucky Derby (G1) contender can hail from anywhere, even the “world’s smallest breeding operation,” as Clint Joiner jocularly calls his Calloway Stables partnership with Tyler Alexander. Now they’re known the world over as the breeders of the UAE Derby (G2) winner.

The childhood friends from Tennessee were down to one mare after their first passed away. That one remaining, Belvedera, became the dam of Plus Que Parfait, only the third foal bred by Calloway.

A daughter of 1998 Breeders’ Cup Classic (G1) hero and Canadian Hall of Famer Awesome Again, Belvedera is a half-sister to 1999 Canadian Oaks winner Touch Dial, all three homebreds campaigned by Frank Stronach. Belvedera raced only once, finishing last as part of a favored entry at Charles Town, but her bloodlines implied she had some chance of making a useful broodmare.

Stronach’s Adena Springs offered the four-year-old Belvedera, carrying her first foal by resident sire Fort Larned, at the 2014 Keeneland November Breeding Stock Sale. Although Fort Larned was no slouch as the 2012 Breeders’ Cup Classic winner, Belvedera came with an added incentive for the 2015 breeding season – a visit to another young Adena Springs stallion, Point of Entry.

The Calloway partners agreed on the appeal of turf star Point of Entry. Not only was he a five-time Grade 1 winner, and arguably unlucky runner-up in the 2012 Breeders’ Cup Turf (G1), but he sports superb bloodlines as a Phipps homebred. Point of Entry is by Dynaformer (sire of 2006 Derby legend Barbaro), closely related to multiple Grade 1 queen Pine Island, from the immediate family of 2005 Breeders’ Cup Distaff (G1) romper Pleasant Home, and the same female line as Hall of Famer Sky Beauty.

“That was the real value of the mare,” Joiner said of the included season to Point of Entry.

“That was the driver,” Alexander interjected.

Value is vital to small breeders who don’t have the luxury of splurging on the headliners, but have to stick to tight budgets. That discipline is essential for the Calloway partners, who dabble in bloodstock while running other businesses for their livelihood.

While the breeding enterprise isn’t their “day job,” both grew up on farms and have a background with horses. Joiner, a veterinarian’s son, was a lead wrangler in Colorado, and Alexander’s formative years were spent with Quarter Horses and Tennessee Walkers on the farm that’s been in his family for four generations.

As the friends formed Calloway Stables – named after the southwestern Kentucky county where the venture was launched – Belvedera fit the value-oriented plan.

Bloodstock agent Josh Stevens, their adviser who scouted out Belvedera, purchased her for Calloway for $20,000. (Stevens is also famous on the 2019 Derby trail for buying Louisiana Derby [G2] winner By My Standards, as a two-year-old in training, for Allied Racing Stable. His tale is forthcoming.)

Duly bred back to Point of Entry, Belvedera produced her chestnut son on March 23, 2016, at Oak Lodge near Paris, Kentucky.

From the start, the baby we’d later know as Plus Que Parfait took to people easily. 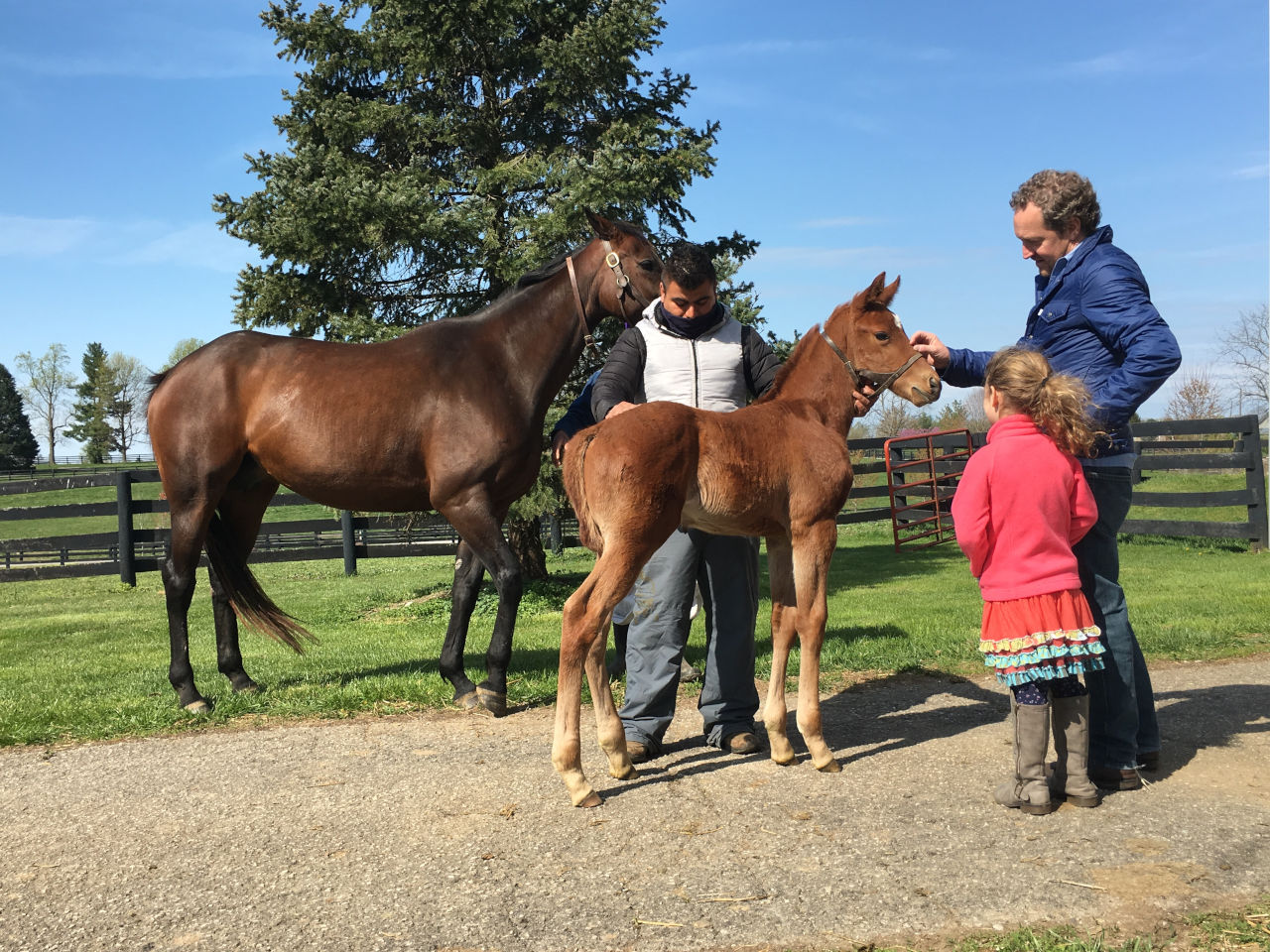 Alexander (pictured above visiting the foal) credits his “extremely engaging” nature to both Belvedera and to his upbringing.

“A lot of that had to do with the mare. She was a good mama,” Alexander said. “And the way Alan Fitzsimons raises them at Oak Lodge.”

“Like Tyler mentioned, Alan and his team at Oak Lodge raise young horses properly,” Joiner said. “Horses get as much time out in the paddock as possible,” which helps them develop bone.

“Alan puts a premium on socialization and getting them ready for the sales.”

Belvedera helped the process: “His mother was always very attentive, one who took to her foals right away.” 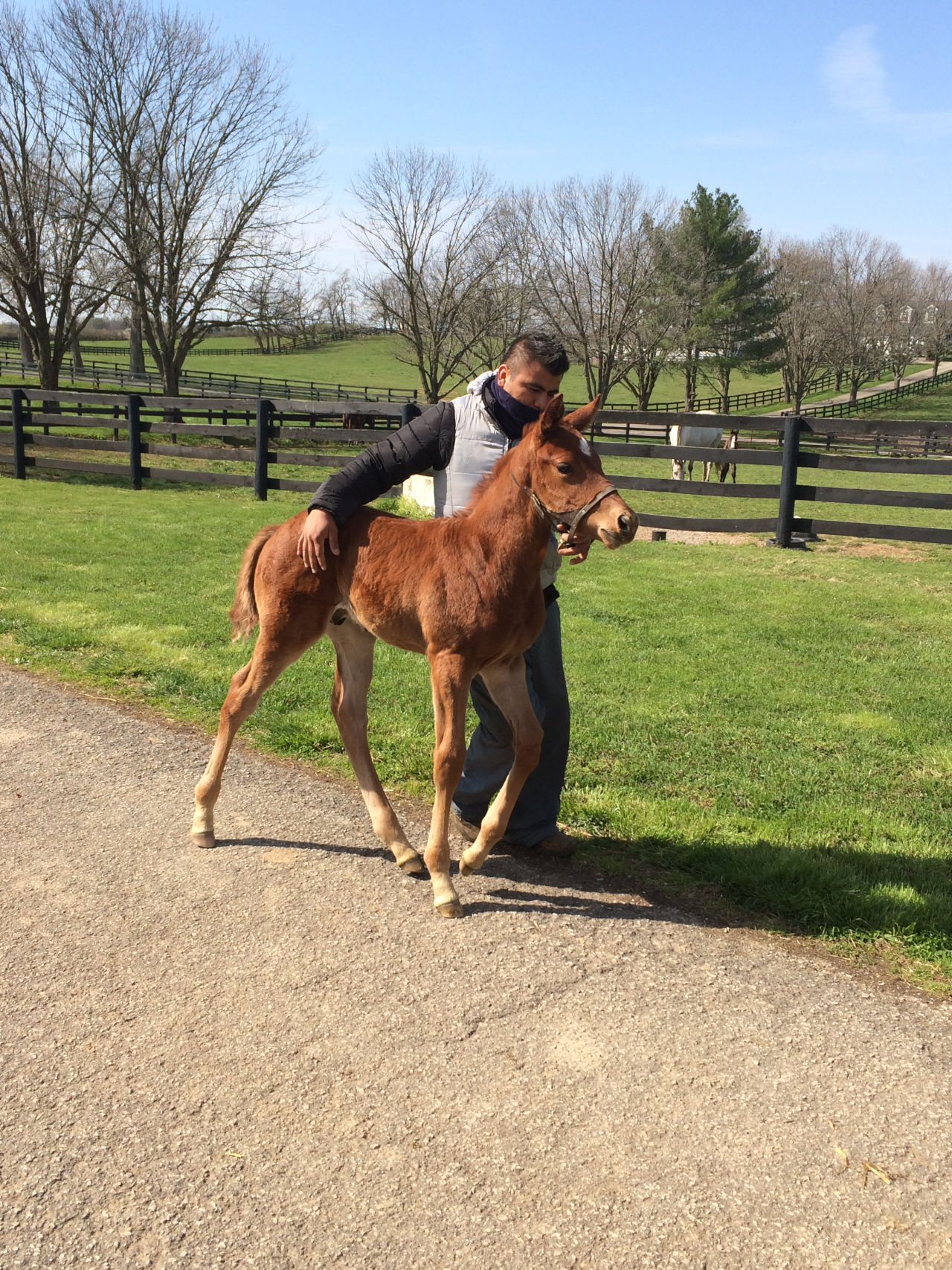 The yet-unnamed colt “was always curious, very engaged, focused on who was around him,” Joiner added.

“You could always see the athletic stance,” along with his “smart, level-headed” temperament.

There were a couple of minor setbacks, the kind of little things that babies deal with, and he shrugged it off with a “tough as nails” disposition.

“Any curveball, he’d catch it and move forward,” Joiner said.

That’s why Alan Fitzsimons remembers him as “pretty straightforward as a baby” at Oak Lodge.

“He wasn’t the biggest foal, being out of a small Awesome Again mare, but just needed time to mature and grow up,” Fitzsimons said.

“He was always easy to deal with and took everything in his stride from day one on the farm and while he was being prepped for the November foal sale at Keeneland.

“He never really put a foot out of place at any point.”

Belvedera’s son was offered as a weanling at Keeneland November in keeping with the Calloway Stables’ business plan – as the partners describe it in baseball parlance, “single up the middle,” i.e., keep the cash flow going, be able to reinvest, and make the operation sustainable. Although the weanling didn’t reach his reserve price when bidding stalled at $24,000, and went back home to Oak Lodge, he would be sold privately. 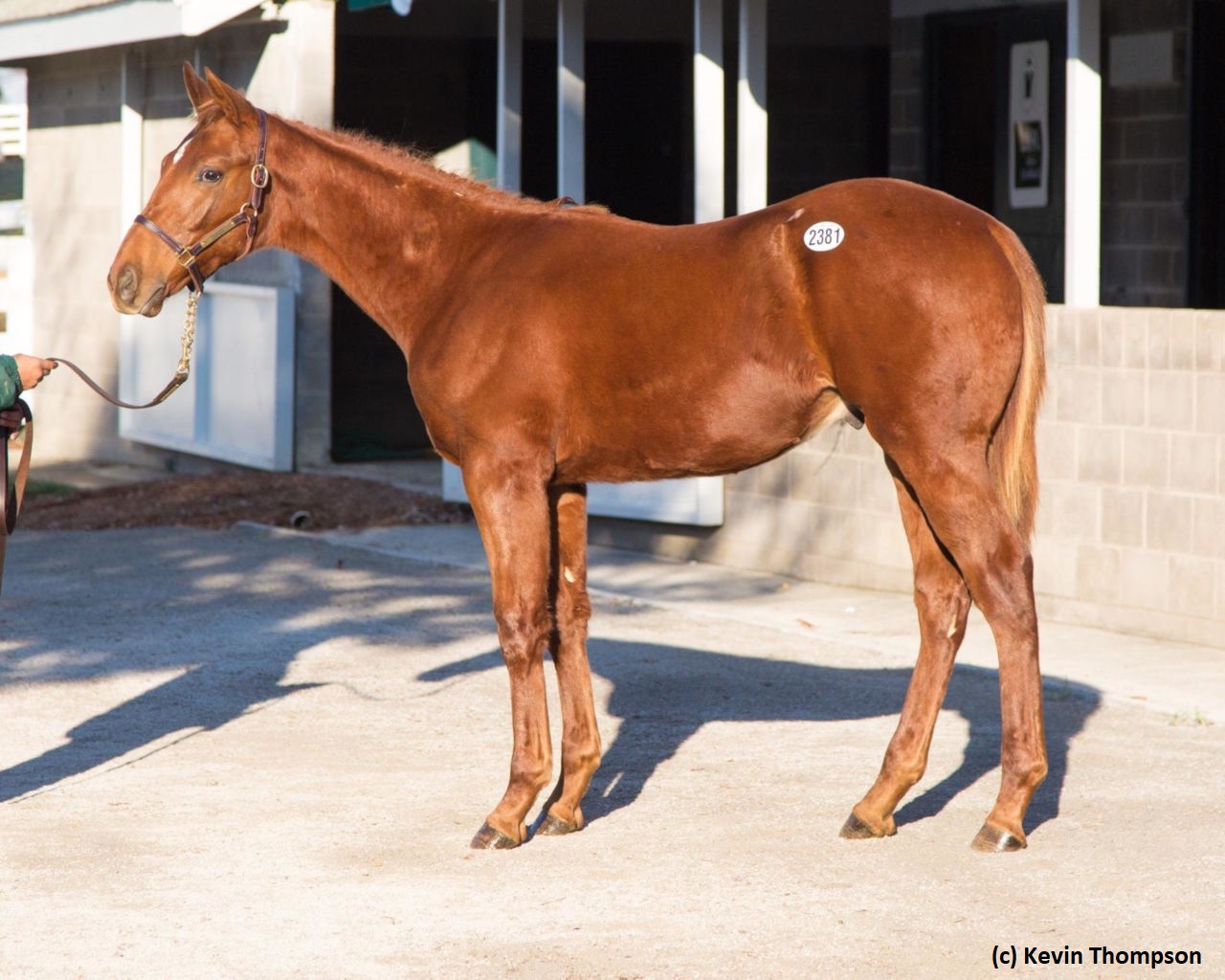 Calloway also went on to sell Belvedera, in foal to 2010 Derby winner Super Saver, for $32,000. The proceeds promptly went toward the purchase of a Shanghai Bobby colt, in partnership, for $36,000 – and upon resale, he brought $180,000 from trainer Ken McPeek, as agent. (He’s now a two-year-old named Shanghai Moon.)

While the business plan was working out, the Calloway partners would eventually find themselves thrust into the international spotlight when Plus Que Parfait booked his Kentucky Derby ticket by way of Dubai.

You might say that the seeds of his UAE Derby gambit were planted all the way back at the 2017 Keeneland September Sale. The Point of Entry-Belvedera yearling was gaveled down for $135,000 to Conor Foley’s Oracle Bloodstock, agent for Imperial Racing. His new owners include Russians involved in the Dubai scene. Foley himself had worked for Godolphin in Dubai, as had trainer Brendan Walsh earlier in his career.

Named Plus Que Parfait, the “pluperfect” or “past perfect” verb tense in French, the chestnut was bred to excel with maturity. So it was auspicious that he finished third in his first two starts as a juvenile, broke his maiden at Keeneland over a pair of future graded stakes winners (Harvey Wallbanger and Derby rival Cutting Humor), and capped the season with a hard-charging second by a neck in the Kentucky Jockey Club (G2).

Plus Que Parfait was expected to burnish his Derby credentials at Fair Grounds over the winter, but his French name notwithstanding, he wasn’t at home in New Orleans. After a rough-trip fifth behind War of Will in the Lecomte (G3), and a too-bad-to-be-true 13th in the Risen Star (G2), Walsh transferred him to Palm Meadows and pointed for the UAE Derby.

This decision made sense given the Dubai background of his connections, but American shippers had been unsuccessful in the UAE Derby in the past. Plus Que Parfait defied the stats. Thriving physically once arriving in Dubai, he responded to the addition of blinkers and scored a breakthrough victory over fellow American Gray Magician.

Watching back home was Alexander, whose wife caught his reaction in a video that’s gone viral.

That candid clip sums up what it means to breed a major winner on the international stage, and one who just guaranteed himself a spot in Derby 145. The feeling is amazing no matter how many horses you have, but it’s extra special when you’re the “world’s smallest breeding operation.” 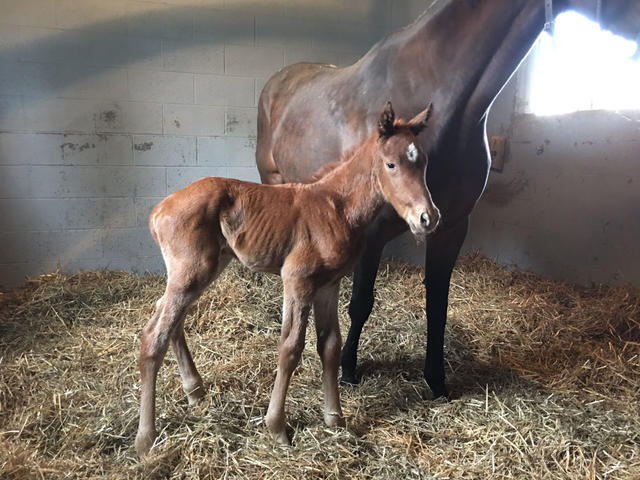