Tales from the Crib: Practical Joke

Practical Joke proves that you don’t have to be a mega-sized breeding operation to come up with a top-class Kentucky Derby (G1) contender. He hails from the small broodmare band belonging to the Whispering Oaks Farm of Keith Crupper and his trainer brother, Allen.

“We bought his dam with money we made off a race filly my brother Allen had bought us as a yearling, V.I.P. Princess, that we raced with some partners,” Keith Crupper recalled.

V.I.P. Princess, purchased for a mere $20,000 at Keeneland September, went on to win four races – all during the time she was trained by Allen.

Whispering Oaks used the proceeds wisely, going to $130,000 to snap up the broodmare Halo Humor at the 2008 Keeneland January Horses of All Ages Sale.

A fast two-year-old for Steve Asmussen, Halo Humor had won her first two races at prestigious Saratoga by a combined margin of 10 1/2 lengths. But she gave way badly to finish a distant fourth in the 2005 Matron (G1). She resurfaced four months later and lost narrowly in a Louisiana-bred stakes at Evangeline Downs, thereby gaining minor black-type. Sidelined for nearly 11 months, Halo Humor was unplaced in the final outing of a career limited to five starts. By the time she toured the sales ring, she was a five-year-old carrying her first foal by 2000 Kentucky Derby winner Fusaichi Pegasus.

Halo Humor proved to be a commanding personality at Whispering Oaks.

“His mother is a mare that will run a field where ever you put her,” Keith Crupper commented. “I think that is transferred over to foals. She is a leader and foals learn that from their dams. If a mare walks up and everyone moves out the way, they learn to be dominant.”

Until Practical Joke came along, however, Halo Humor had little success as a broodmare. That first foal, a filly, never raced, and she’d produced just one low-level winner from her three starters.

The key turned out to be breeding her to up-and-coming young sire Into Mischief, the Grade 1-winning half-brother to four-time Eclipse Award champion Beholder. Crupper was a big believer in Into Mischief, who was getting off to a brilliant start at stud with Goldencents and Vyjack in his first crop. Both were prominent juveniles of 2012 who advanced on the 2013 Derby trail, when Halo Humor visited Into Mischief.

The result of that courtship was the fine bay colt we now know as Practical Joke.

“Just watching him as a foal out in the field, he was a typical colt pushing and shoving on other foals, but not a bully,” Crupper said. “As far as working with him, nothing about him stood out per se. Never gave us a problem. He would walk up to the gate to get caught and come in.”

As a good-looking baby with a pleasing disposition, he promised to be a windfall for Whispering Oaks, which had to take the opportunity to help the revenue stream.

“We had already kept a couple of other foals out of halo Humor, and just had no luck. We still have his half-sister. So we started selling them.

“Being small we just can’t keep them all or even very many of them. When we talked about who would get sold, he was at the top of that list.

“Being a very good colt we felt he could put money in the bank.

Once it was determined that the yet-unnamed colt would be sold at auction, the next question was what Keeneland Sale was the better option – the gigantic November Breeding Stock Sale, with more than 4,000 horses cataloged, or the January Horses of All Ages Sale, with about 1,600 on offer?

Keith Crupper is a partner in the Vinery Sales team, and managing partner Derek MacKenzie was consulted in the decision-making process.

“He was entered in the November sale. After talking with Derek MacKenzie, we opted to push back into the January -- just felt he was moving forward and that the time would make him that much better. Plus a smaller sale we hoped that he would stand out more.”

As a foal born April 15, the colt figured to be further along in January than as a fall weanling. Halo Humor’s boy certainly strutted his stuff at Keeneland, appearing to thrive in the sales environment.

“At the sale grounds sometimes you find a horse that likes that atmosphere and attention,” Crupper explained. “They seem to shine a little brighter as the showing days go on. That was one of the things I liked about him most. You could tell he enjoyed that attention.”

Prospective buyers took notice of the smart youngster, who was listed as a yearling since Northern Hemisphere Thoroughbreds officially turn a year older on January 1, regardless of their actual birthday.

Gainesway’s Director of Public Sales, Brian Graves, bought him on behalf of Clear Ridge Stables for $135,000.

“He brought quite a bit more than the reserve,” Crupper said. “We had it placed pretty low and felt safe he was going to carry himself over the mark where we could bring him back home.

“We have a small group of mares we sell foals and yearlings out of. It's very important to us to place them right, because we don't have a big budget to buy mares with. We also board outside mares and foal for other people.

“We are always happy when we get what we want as a price and the next person moves up on that. That's how it should work. Brian Graves did a great job of picking him out. After the sale told me how excited he was with getting him.”

Crupper thereby reveals a kind-hearted generosity about the nature of the horse business, and the revolving door of risk. Whispering Oaks achieved its objective, selling at a good price, getting much-needed capital, and avoiding the future risk of whether the good baby would continue to progress.

Clear Ridge, the “pinhook” partnership of Gainesway and George Bolton, in turn assumed that risk. Their investment was predicated on a forecast – that he would bring more down the line – and so it proved. He vindicated their judgment with a nifty profit eight months later at Keeneland September, commanding $240,000 from Aquinnah Ventures.

Named Practical Joke by his new owners, Seth Klarman’s Klaravich Stables and William H. Lawrence, he was sent to Nick de Meric in Ocala, Florida, for his early education. Then he graduated to join trainer Chad Brown.

Practical Joke, like Halo Humor, rolled on his career debut at Saratoga. But he improved on mom’s resume by winning two historic contests, the Hopeful (G1) and Champagne (G1). And in his iron determination, Crupper glimpsed the character of his dam.

“I think he showed that when Syndergaard and him laid on each other in the Champagne. He didn't yield.”

For the same reason, Crupper believes that Practical Joke may overcome the stamina concerns voiced by pedigree purists.

“I keep hearing how his pedigree is going to stop him. Well up to this point he hasn’t stopped yet.

“He may not have won every race and has yet to win at two turns -- not from stopping. Even in the Blue Grass (G2) he was inching away at Irap’s lead, head down and running.

“That is heart. Pedigree can’t judge heart. So as long as no one tells him to stop running at a mile, he will never know.”

Practical Joke’s work ethic also reflects the Crupper brothers. Raised on their parents’ farm in Georgetown, Kentucky, Keith and Allen have labored hard, in the fiercely competitive bloodstock world, to establish their own niche at Whispering Oaks in nearby Paris.

Would the boys whose “papaw” worked in the Keeneland paddock ever dreamed they would have bred a multiple Grade 1 winner who finished second in the Blue Grass? And now as a Derby runner, Practical Joke has raised their profile and brought them to a far wider audience.

“We are looking forward to hearing those words: and down the stretch they come!”

So Keith summed up his Derby excitement. That feeling, experienced by racing fans everywhere, is exponentially greater when it’s your baby – “the fastest foal in the field,” as the Crupper Bloodstock Facebook post put it – turning for home in the Run for the Roses. 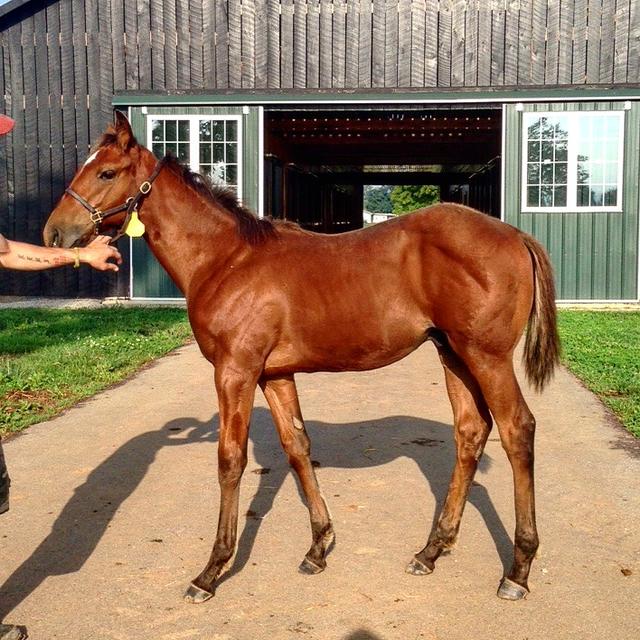