Tales from the Crib: Roadster

Roadster seeks to add to the rich Kentucky Derby (G1) history of his breeder, Arthur B. Hancock III’s Stone Farm, as well as pay homage to his parents’ breeder, the late Edward P. “Ned” Evans.

Evans’ father, Thomas Mellon Evans, bred and owned 1981 Kentucky Derby champion Pleasant Colony. Ned was poised to emulate that achievement in 2009 when his own homebred, Quality Road, emerged as the early Derby favorite after victories in the Fountain of Youth (G2) and Florida Derby (G1). Unfortunately, foot problems ruled him out of the Run for the Roses. Quality Road eventually would add five more graded wins to his resume, including the 2010 Donn H. (G1), Metropolitan H. (G1), and Woodward (G1).

Roadster’s dam, Ghost Dancing, was a fourth-generation Ned Evans homebred descended from Grade 1 vixen Dance Teacher. By Silver Ghost (himself a homebred), Ghost Dancing captured the 2008 Oakley S. at Colonial Downs, a five-furlong turf sprint for Virginia-restricted company, in what turned out to be her last start.

After Evans’ passing in 2010, Ghost Dancing was part of the prized bloodstock collection put up for auction by his estate the following year. The Evans Dispersal presented a once-in-a-lifetime opportunity to buy into his carefully cultivated families, and Stone Farm was among the beneficiaries when Hancock paid $220,000 for Ghost Dancing, in foal to Candy Ride.

Hancock, the oldest son of Claiborne Farm legend Arthur “Bull” Hancock Jr., has been directly involved in the production of three Derby heroes since developing his own Stone Farm. Gato Del Sol (1982) was a homebred campaigned in partnership with Leone Peters; Hall of Famer Sunday Silence (1989) was raised and co-owned by Hancock; and Fusaichi Pegasus (2000) was bred in partnership with Stonerside but sold for a Keeneland July-topping $4 million as a yearling.

Stone Farm’s Derby total could have been higher with a little better luck. The Hancock/Peters-bred Risen Star, a troubled third in 1988, went on to roll in the Preakness (G1) and Belmont (G1) and took year-end honors as champion three-year-old colt. Hancock homebreds Strodes Creek (1994) and Menifee (1999) both finished second, and most recently, Stone Farm-bred Mastery was the top Derby contender in 2017 before his career was ended by injury.

There was a happier turn of events in the summer of 2017 as Ghost Dancing’s Candy Ride foal, Ascend, scored a major win in the Manhattan (G1) over 1 1/4 miles on turf. That elevated the profile of her then-yearling colt by Quality Road, the horse we now know as Roadster, leading up to his touring the sales ring

From his birth on April 23, 2016, the colt we know as Roadster impressed with his energy and athleticism. Indeed, his early caretaker, Oscar Galvez, was so convinced of his exceptionalism that he began recording videos to document his babyhood.

“Everyone knew that he was a special horse,” Hancock’s son, Arthur IV, recalled. “(Galvez) felt lucky to get to work with him.

“He was constantly ripping and running around the paddock, a lot more than normal foals. Just showed how much he loved to run.”

The “happy, healthy foal” was also “curious, precocious, inquisitive” in his interactions with people.

Initially dark, he began to turn his dam’s color – gray – as he grew up. Going into the 2017 Keeneland September Yearling Sale, he offered an enticing combination of pedigree, conformation, and that indefinable something about the way he walked.

“He had that really athletic, cat-like walk,” Arthur added. “He moved really well, had a great attitude, moved like an athlete. We had a lot of confidence that he could be good because of how he moved.”

Likewise taken with the colt’s movement was bloodstock guru Marette Farrell, who was scouting out yearlings for Speedway Stable.

“He was such a fluid mover,” Farrell said. “That first step that he took, there’s something about a horse taking that step and reaching with his shoulder…

“I felt that he could have a really big stride on the racetrack.”

Standing still, he filled the eye as well.

Meanwhile, fellow Speedway adviser John Adger had been keeping a careful eye on the colt’s aforementioned half-brother, Ascend. That runner had caught his notice when beating Synchrony in a turf stakes at Laurel, so Ascend was already on Adger’s radar even before he upset the Manhattan in the Stone Farm colors.

“Arthur’s one of my dearest friends,” Adger said, speaking of a bond dating back more than 50 years, forged by their common love for the Thoroughbred.

“Very few people in the game have had the success, either breeding or owning horses that run in the American classic races, that Arthur has had.

“I have the utmost respect for the way he raises his horses – his record speaks for itself.”

Adger has played his own role in that record. He’d served as the racing/bloodstock manager for the late Bob McNair’s Stonerside, the co-breeder of Fusaichi Pegasus.

Thus the longtime Hancock/Adger connection would be renewed when Speedway bought the Quality Road-Ghost Dancing colt for $525,000. And as an indicator of his high regard for the yearling, Hancock retained a share in the ownership.

Looking back to Santa Anita Derby (G1) winner ROADSTER as a #KeeSept yearling in 2017! @stonefarmky pic.twitter.com/QN387sU5Um


Speedway is the nom de course of partners Peter Fluor and K.C. Weiner, themselves Houston-based owners like the McNairs of Stonerside had been. Fluor’s father, Bob, had co-owned the great Alleged, the two-time winner of the Prix de l’Arc de Triomphe (G1) (1977-78) who lost only once in his career.

His new connections named him Roadster, an apt take-off on his sire’s name as well as his own racy qualities, and sent him to Niall Brennan in Ocala, Florida, for his early education.

“He was always straightforward and a good student,” Brennan said, “and being steel gray he would catch your eye on the track with his presence and athleticism. He was workmanlike but never stood out as spectacular.”

Recording his first official breeze last April, Roadster took a three-furlong test spin in :37.82, best of 18 on the day at Niall Brennan Stables, and followed up with another solid move in :37.19.

Roadster was ready to join trainer Bob Baffert. Already on the worktab at Los Alamitos May 15, he began to show enough to elicit a famous comparison.

Last summer, fresh off the Triple Crown sweep by Baffert’s Justify, a reporter from the entertainment site TMZ had the chance to ask the Hall of Famer who was his next Justify.

“Roadster” was Baffert’s reply – and from then on, his shorthand was “the TMZ horse.”

With all of the hype, Roadster was bet down to 4-5 favoritism in his career debut at Del Mar July 29. He “justified” expectations in a 4 1/4-length romp.

Another star turn was expected in the Del Mar Futurity (G1), where he went off at odds of 3-5, but the bubble was burst. Roadster sputtered home third to stablemate Game Winner, who went on to win the American Pharoah (G1) and clinched an Eclipse award in the Breeders’ Cup Juvenile (G1).

While Game Winner may have been slightly underestimated going in, Roadster clearly lacked the spark of his maiden win. Indeed, there was a reason for his flat performance: a breathing issue. After a corrective procedure made him good as new, he’s gone two-for-two.

Roadster returned March 1 with a smart allowance score, and then had the satisfaction of turning the tables on Game Winner in the April 6 Santa Anita Derby (G1). That earned him the all-important points to make Derby 145.

As Roadster bids to live up to his “next Justify” tag, he can tap into a deep wellspring of history, from his bloodlines crafted by Ned Evans to the winning combination of nature and nurture at Hancock’s Stone Farm.

Hancock, himself a friend of Evans, wants to share the experience with others close to the late owner/breeder.

“Dad’s actually invited some good, close friends of Ned to come to the Derby,” Arthur said, mentioning the catchphrase for the first Saturday in May: 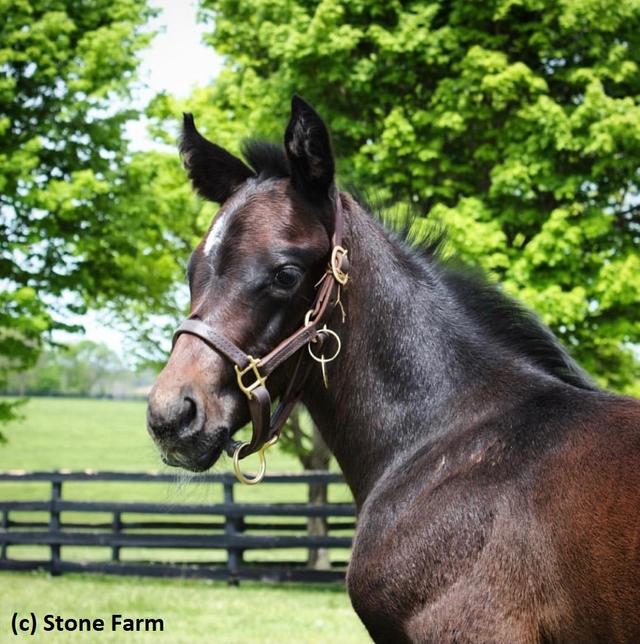