Tales from the Crib: Spinoff

One of the world’s great racing families for more than a century, the Wertheimers will be represented in the Kentucky Derby (G1) for the first time by their homebred Spinoff.

Brothers Alain and Gerard, “Wertheimer et Frere,” are heirs to the legacy of grandfather Pierre, both as proprietors of the House of Chanel and a comparably fashionable Thoroughbred collection. Pierre, according to the New York Times, actually met Coco Chanel at the French racecourse Longchamp.

Other Wertheimer et Frere horses have excelled since their sale to new owners. Americain, already a high-class stayer in Europe, went on to Melbourne Cup (G1) glory in 2010, while Mondialiste scored in the 2015 Woodbine Mile (G1) and 2016 Arlington Million (G1).

As that resume reveals, the Wertheimer name is mostly synonymous with turf stars. The pattern carried over to the United States when Kotashaan, campaigned in the name of the family’s La Presle Farm, clinched Horse of the Year honors in the Breeders’ Cup Turf (G1).

But there have been standouts on the American dirt too, from Dare and Go’s stunning upset of Cigar in the 1996 Pacific Classic (G1), snapping the Hall of Famer’s 16-race winning streak, to 2003 Breeders’ Cup Juvenile Fillies (G1) champion Halfbridled. Perennial bridesmaid Setsuko nearly added to the tally in the 2011 Santa Anita H. (G1), the year after he was stuck on the bubble list for the Kentucky Derby.

The dirt precedent was set back in 1924 by grandfather Pierre, who sent his French champion, *Epinard, to compete in the “International Specials.” In circumstances that didn’t play to his strengths, he nevertheless turned in three terrific runner-up efforts in the series.

Both of his Grade 1-winning parents were among the leading sophomores in their respective years. Sire Hard Spun, runner-up in the 2007 Derby and Breeders’ Cup Classic (G1), scored his signature win in the King’s Bishop (G1). Spinoff’s dam, Zaftig, captured the 2008 Nassau (G3) en route to her Acorn (G1) romp over champion Indian Blessing. She concluded her career with a third to Ventura and Indian Blessing in the Breeders’ Cup Filly & Mare Sprint.

Wertheimer et Frere purchased Zaftig for $1.4 million as a broodmare at Fasig-Tipton Kentucky November in 2011. The acquisition looked all the wiser after her half-sister, Zo Impressive, landed the 2012 Mother Goose (G1) and placed in the Acorn and Coaching Club American Oaks (G1). That made two Grade 1 winners for their dam, Zoftig, who earned her own laurel in the 2000 Selene (G1) and came up a nose shy in the Ashland (G1). Although further back the family had produced 1984 Derby hero Swale and 1988 near-misser Forty Niner, current results give confidence in future prospects.

Since Zo Impressive was by Hard Spun, it made sense to breed half-sister Zaftig to the same stallion, and the offspring of that union is Spinoff. The chestnut colt arrived February 18, 2016, at Hagyard Farm near Lexington, once the home of champion and influential sire Hail to Reason and Hall of Famer Stymie.

Spinoff was sent to the famed training center run by trainer Todd Pletcher’s father, J.J., for his early lessons. According to a report by the Blood-Horse’s Ron Mitchell, the youngster was highly regarded at the academy.

Graduating to Pletcher’s Palm Beach Downs base last April, Spinoff justified 3-1 favoritism in his career debut at Gulfstream Park in June. He shipped up north to Saratoga to tackle stakes company, but after his third in the Saratoga Special (G2), headed to the sidelines.

Although Spinoff didn’t return to the worktab until January 11, he got ready in time to decimate a Tampa Bay allowance as his tightener for a Derby points race. His chance came in the Louisiana Derby (G2) at Fair Grounds, where he struck the front in the stretch, only to get mugged late by By My Standards.

Luckily those 40 points were enough to make the field for Derby 145. Spinoff might not have been as lucky drawing post 19, but at least the tactical colt should avoid jams and carve out a clean, if wide, trip.

Perhaps Spinoff will channel the courage of another chestnut, Epinard, and respond gallantly to the challenge. 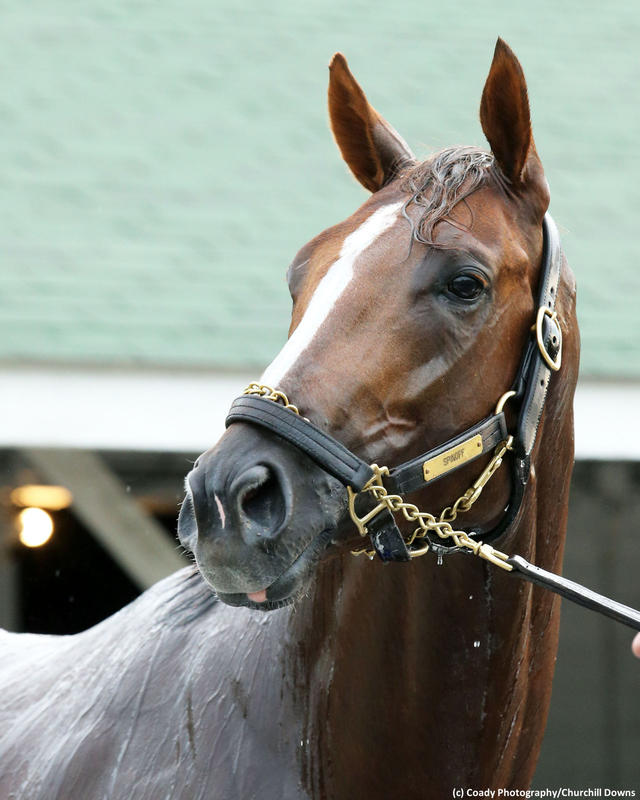