Tales from the Crib: Taiba 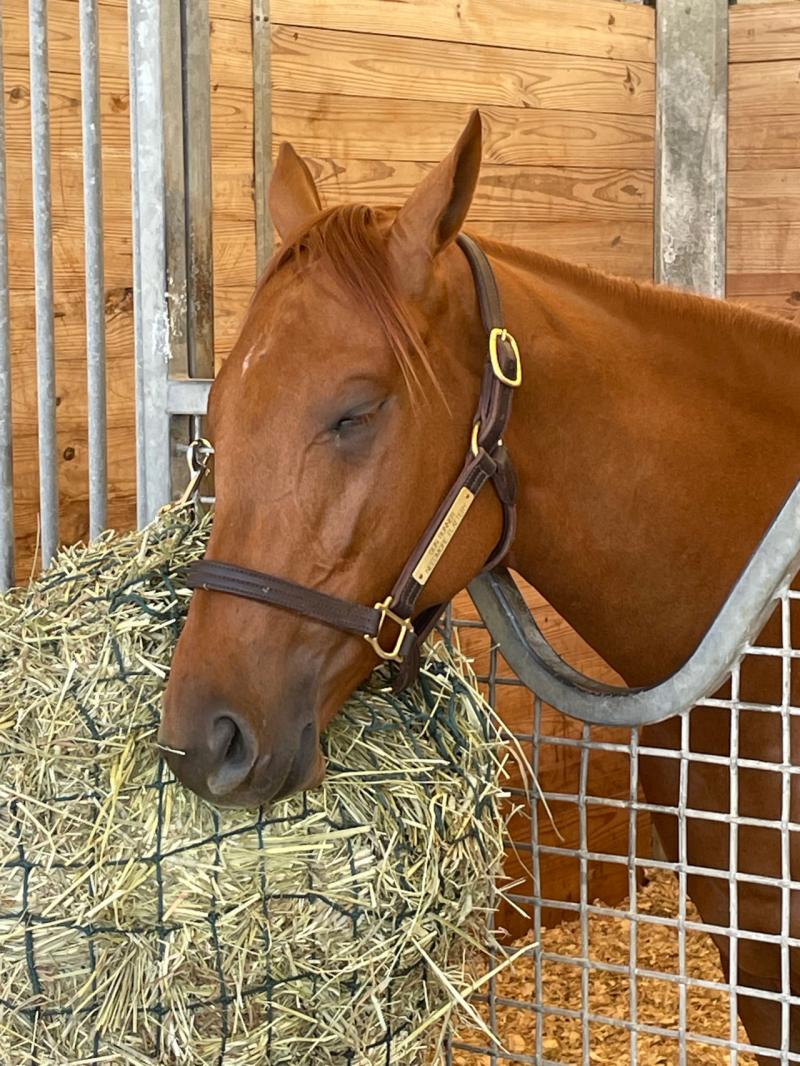 Taiba catches a nap between inspections before selling for $1.7 million at Fasig-Tipton's Gulfstream Sale (Courtesy of Dean De Renzo)
Taiba will bid to defy nearly 140 years of Kentucky Derby (G1) history. Not since Leonatus, all the way back in 1883, has a colt won the Churchill Downs classic in just his third career start.
Yet if any sophomore can blithely shred that stat, it’s Taiba. His meteoric rise on the racetrack is no revelation to those who’ve known him all along, beginning with breeder Bruce Ryan and his wife, Mary.
Taiba is the incarnation of the best qualities of his sire, Horse of the Year Gun Runner, and his fiercely competitive dam, Needmore Flattery, who was twice honored as Ohio’s state-bred Horse of the Year. From his outstanding physique and athleticism to his fine temperament and mental toughness, he has inherited much more than his parents’ chestnut coat.
Needmore Flattery was herself bred and raced by Ryan, in partnership with trainer Tim Hamm’s Blazing Meadows Farm. Although she was by Kentucky blueblood Flatter, Needmore Flattery’s dam, Kiosk, was acquired from Eutrophia Farm, the Ohio establishment of the late Elisabeth Alexander. Thus Kiosk brought the blue-collar factor that has been known to reinvigorate aristocratic pedigrees.
In her four-year career, Needmore Flattery was the definition of a hard-trying campaigner, winning 17 of 39 starts, placing 10 times, and working for every penny of her $732,103 bankroll. She won or placed in a grand total of 22 stakes.
“She was full of heart and gave it her all every time, no matter track condition, distance, or surface,” Mary Ryan recalled.
Indeed, Needmore Flattery won from five furlongs up to 1 1/8 miles, on dirt ranging from fast to sloppy, and even on turf. A precocious juvenile, she blossomed at three and four, and earned her last win at the age of five.
Ryan bought out Hamm’s interest as Needmore Flattery neared the end of her time on the racetrack, and he sent her to champion Uncle Mo to begin her broodmare career. That tryst resulted in a colt, named Need More Mo, who was working sharply toward his debut. Unfortunately, he sustained an injury in training and didn’t get the chance to race. But Need More Mo will have an opportunity to make a name for himself as an Ohio stallion. 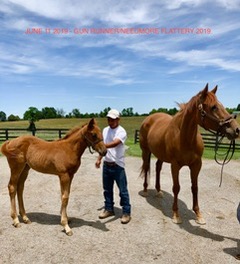 Needmore Flattery visited Gun Runner in his freshman season at stud, and their son arrived on April 13, 2019, at Millennium Farms in Kentucky. After spending some time in the Bluegrass, Needmore Flattery returned home to Ohio with her baby.
But he wouldn’t be called Taiba yet. The Ryans initially registered him as “Needmore Guns.” Aside from being a play on his parents’ names, it was a reference to the fact that he was the latest, and smallest, foal on the Ryan farm.
“But his conformation was nice and balanced,” Mary Ryan noted.
“Here on the farm he was such a pleasure to be around – so interactive and personable….Anytime he’d see us, no matter where he was in the field, he came running.”
Nicknamed “Gunny,” the colt was smart enough to know how to take care of himself among the bigger boys.
“The other two colts in the crop had size on him from the beginning. They added pounds quickly and were constantly ‘at it,’ while Gunny was very laid-back and level-headed, trying to ignore their over-the-top antics. 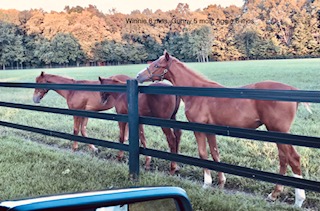 “When we sold one colt early, we put the other with an older gelding and Gunny with the fillies of that crop, which included Needmore Flattery’s full sister (now a stakes winner herself, named Flatter Her Again).”

The smaller Gunny is pictured between the fillies, with Flatter Her Again on the right.

“After he was too mature to hang with the girls, he was moved to a field with an arthritic babysitter, to prevent chance of injury.”
Gunny had a blast using that field as his own private track, or all-purpose training facility since he did other impromptu forms of exercise.
“He cared not that he didn’t have a competitor to run with – he ran that 15-acre field like it was a racetrack. When we didn’t have time during ‘rounds’ to get into the field with him, we caught him tossing feed buckets or pirouetting about, racing our Great Danes down the fenceline, or otherwise entertaining himself trying to get attention of horses in the adjacent field.”
Gunny was “truly one of the best dispositioned horses we’ve bred in the 10-plus years I’ve been with Bruce,” Mary said, adding that Need More Mo “has the same intelligent, laid-back disposition.”
As a yearling, Gunny was slated to sell at Fasig-Tipton Kentucky in October. He prepared for his auction date in the Bluegrass, at Peter Berglar’s Stonereath Stud and with Erin O’Keefe’s BTE Stables.
Zach Madden of Buckland Sales, who consigned the colt on the Ryans’ behalf, was impressed by the yearling.
“He has always been such a pure athlete,” Madden said. “He absolutely has the intangibles too. He is as cool as a cucumber. Nothing ever really bothered him. Very smart, business-oriented and straightforward.” 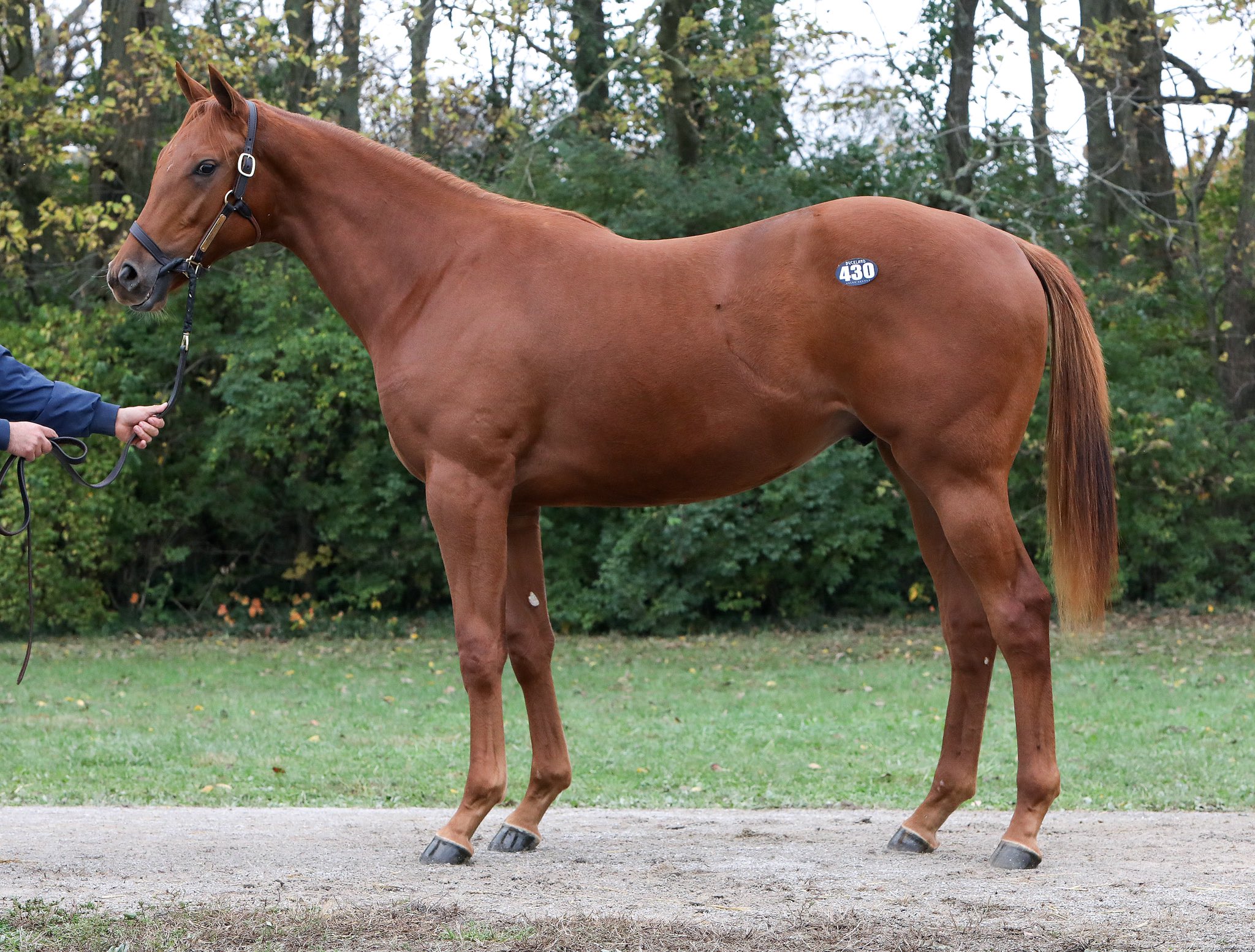 On sale day, as the colt strutted around the back ring with an air of absolute authority, he caught the eye of a particularly astute judge – Dean De Renzo. Half of the renowned duo of Hartley/De Renzo Thoroughbreds, who have sold an array of champions including 1997 Kentucky Derby star Silver Charm, he immediately sensed that this yearling was something special.

“It’s a gut feeling, kind of like an artist painting a picture,” De Renzo said of his intuition as a veteran horseman.

So compelling was the colt that De Renzo did something he ordinarily wouldn’t do – buy, without having the youngster vetted first. Since he’d never seen him until right before the sales ring, there was no time for in-depth inspection.

Aside from the yearling’s desirability, it was consignor Madden’s forthrightness that sealed the deal. De Renzo’s on-the-spot discussion with Madden underscores the crucial importance that trust plays in the industry. Precisely because of his comfort level with Madden, De Renzo took the plunge.

“I felt so comfortable with the consignor, that I put up my hand to buy.”

TAIBA is a two-time #FasigGrad & a very special one for @BucklandSales, who consigned today's Santa Anita Derby (G1) victor as a yearling... TAIBA is their first G1 winner consigned! Congratulations to all involved!

After selling to De Renzo for $140,000, the colt was X-rayed, and all looked great. He’d prove well bought once he got down to his early training in Florida. The stage was set for a phenomenal return on investment as a “pinhook” – a youngster purchased with the goal of resale at a later stage of development.

“We never got to the bottom of him, just a great-training horse,” De Renzo said.

But beyond his raw ability, the colt has a gutsy attitude, the kind of heart that can’t be taught. He just wants it more.

“When you put him in company, he’s a different horse. He always wants to win. Even just galloping, he has to have his head in front. By himself, it’s like a walk in the park for him. When he has a little company, he grows 10 feet tall.”

Entered in Fasig-Tipton’s Gulfstream Sale of two-year-olds in training, the colt blitzed one furlong in :10 1/5 at the under tack show. He wasn’t done yet, since he then tacked on a monster gallop-out.

“He went out as fast as any horse went at the sale,” De Renzo noted. “He has that big kick…a lot of oxygen.

“He hits a whole ‘nother gear, and takes a breath, and keeps going.”

Accordingly, the juvenile drew plenty of interest, and found himself led out of his stall repeatedly for would-be buyers to examine. But just as he did on the farm in Ohio, he knew how to manage himself amid frenetic activity. This time, he’d just put his head down, use his hay bag as a pillow, close his eyes, and take cat-naps.

Gunny was one of the last horses to go under the hammer, as Hip No. 181, and fireworks ensued. Gary Young, as agent for Amr Zedan’s Zedan Racing Stables, ultimately prevailed in the bidding war – to the tune of $1.7 million, the second-highest price of the sale.

Young, a clocker as well as bloodstock agent, had bought other high-profile runners for Zedan, from future Grade 1 winner Princess Noor (for $1.35 million) to ill-fated Medina Spirit (for $35,000), the first-past-the-post before disqualification in the 2021 Kentucky Derby.

Like them, the new recruit was to be trained by Bob Baffert, who was so enthused that he uncharacteristically high-tailed it back to the Gulfstream barn with Zedan, just to hang out with their big buy. And Baffert called his wife, Jill, to share the news that they just got an “amazing colt.”

“If everything went well, he was a freak,” was how De Renzo summed up connections’ thoughts at the Gulfstream Sale.

Also like Medina Spirit, the juvenile would be given a name redolent of Zedan’s Saudi homeland – Taiba. Zedan remained bullish on his Derby prospects, despite the fact that the colt still hadn’t made it to the races, not only as a two-year-old, but through the first two months of his sophomore season.

Even Justify, who rewrote the record book by winning the 2018 Triple Crown after going unraced at two, debuted on Feb. 18. That gave him just enough time to win a two-turn allowance as his stepping stone to the Santa Anita Derby (G1).

Taiba didn’t have that luxury. Unveiled in a six-furlong maiden at Santa Anita on March 5, he was expected to win as the 1-2 favorite. Fans might have felt a bit concerned, though, as he had a battle on his hands through the early going, and rounding the far turn, he was being asked to find more. But just as he did during his Florida training days, Taiba got his second wind. He repelled every challenge and drew off by an imperious 7 1/2 lengths.;

Zedan’s brain trust, including Young, advised him to wait for the April 16 Lexington (G3) at Keeneland as a suitable spot to stretch out and race against winners for the first time. Zedan overruled them, intent on pursuing the Santa Anita Derby as his only realistic chance of making it to the Run for the Roses. By that point, Taiba was transferred from Baffert, who had been suspended, to trainer Tim Yakteen. Now he would be eligible to score Derby points.

The Santa Anita gambit appeared like one of those owners’ calls that are too ambitious to pan out. In Taiba’s case, however, the owner’s faith was vindicated.

Working out an ideal stalking trip with Hall of Famer Mike Smith, Taiba once again saved his best for last. His dam, Needmore Flattery, used to pack a late punch herself. Taiba swept past his accomplished stablemate Messier to win going away by 2 1/4 lengths. Not only did he handle the abrupt climb to a 1 1/8-mile Grade 1, but he posted a gaudy 111 Brisnet Speed rating – the joint-highest in the Kentucky Derby field.

“A pretty mind-blowing performance,” was how Young described the Santa Anita Derby on Steve Byk’s “At the Races” radio program.

If Taiba can make history on the first Saturday in May, celebrations will ring from the Ohio Valley out across the Atlantic. For Needmore Flattery was subsequently exported to Europe.

Offered back in foal to Uncle Mo at the 2019 Keeneland November Sale, she was sold for $195,000 to Yeguada Centurion, the nom de course of Leopoldo Fernandez Pujals. Her Uncle Mo foal, now a two-year-old filly, was born in Ireland. According to France Galop, Needmore Flattery last year produced a colt by Waldgeist, who famously denied Enable’s three-peat in the 2019 Prix de l’Arc de Triomphe (G1).

Needmore Flattery’s heart and determination have carried her a long way from her Ohio roots. Maybe the same qualities can carry Taiba a long way into the Derby record book. 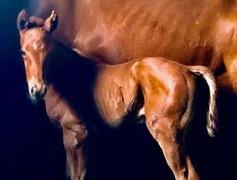