Tales from the Crib: Thunder Snow

If UAE Derby (G2) hero Thunder Snow can land a blow at Churchill Downs, he would be a fitting first Kentucky Derby (G1) winner for the Godolphin empire built by Sheikh Mohammed al Maktoum of Dubai.

At Woodpark Stud, County Meath, the mare Eastern Joy delivered her fourth foal, a bay colt, as the clock neared 10 p.m. on March 24, 2014. The newborn Thunder Snow was a welcome arrival twice over. He belonged to the first Northern Hemisphere crop of his young sire, Australian celebrity Helmet.

And just one month before, the foal’s three-year-old half-sister, Ihtimal, had dominated the UAE 1000 Guineas and UAE Oaks (G3), the latter by 10 lengths, at Meydan.

Ihtimal had previously compiled a fine juvenile campaign on the English turf, winning the May Hill (G2) and Sweet Solera (G3) and finishing third in the Fillies’ Mile (G1). After mopping up during the Dubai Carnival that winter, she returned to Newmarket as a major classic hope for Godolphin trainer Saeed bin Suroor.

“With those connections, Thunder Snow got even more attention than a typical newborn,” said Joe Osborne, managing director of Godolphin Ireland. “He weighed 125 pounds at birth, so was bigger and stronger than the average foal.”

As baby Thunder Snow progressed, spring turned into summer, and the European season was unfolding. Ihtimal garnered a close third in the 1000 Guineas (G1) at Newmarket, and rallied from well back to take fifth in the Oaks (G1) at Epsom.

By September, the weanling Thunder Snow moved to Blackhall Stud, 20 miles away in County Kildare, where he would spend the next year.

“He was a healthy and good-natured youngster who was liked by his handlers for his willing attitude,” Osborne recalled.

Shortly after Thunder Snow officially became a yearling in January 2015, tragedy befell Ihtimal back in Dubai. She was injured in the midst of her morning exercise at Al Quoz Stables, and unfortunately, it proved fatal.

“We are deeply saddened at the loss of Ihtimal,” bin Suroor told godolphin.com. “She was a very talented racehorse and will be sorely missed.”

Then in the spring of 2015, another of Thunder Snow’s older half-sisters out of Eastern Joy, Always Smile, began to flash talent. She came within a nostril of winning the Sandringham Handicap at Royal Ascot.

In September 2015, Thunder Snow changed residence again, now advancing to Kildangan Stud to be broken. His course at Kildangan, the “capital” of Godolphin Ireland, lasted three months. By early December, he was on his way to join the Godolphin stables in Newmarket, where he would develop into a Group 1-winning juvenile for bin Suroor. Like Ihtimal, Thunder Snow went on to become a Dubai Carnival star. 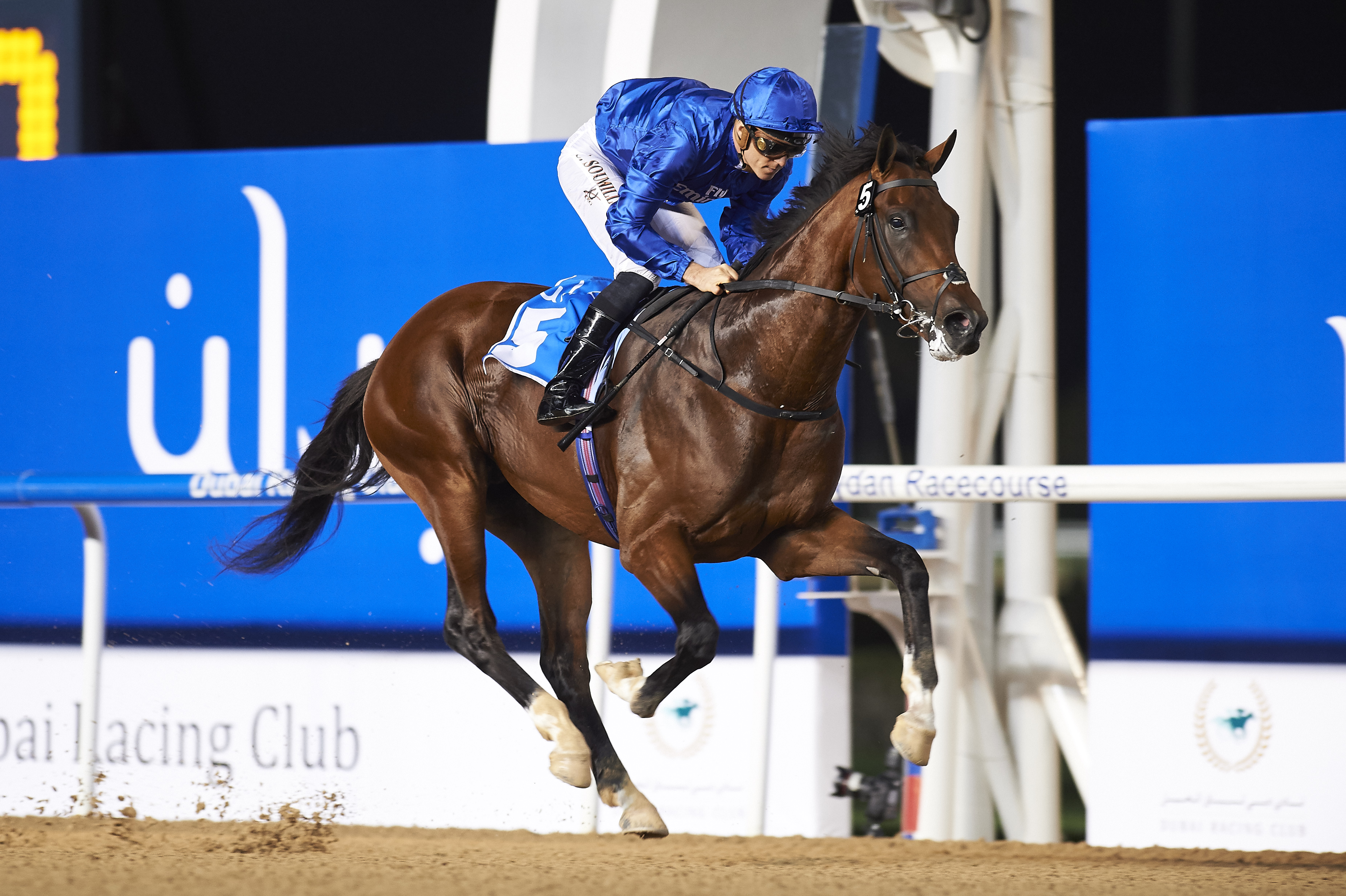 Now that Thunder Snow’s early life has been recounted, it’s time to dig deeper into his pedigree. His relatives can’t tell the whole story of Sheikh Mohammed’s Darley and Godolphin operations, but they offer a glimpse of how he’s amassed a worldwide racing and bloodstock enterprise.

First, the names “Darley” and “Godolphin” go back to the dawn of the breed, for they refer to two of the three pre-eminent foundation sires of the Thoroughbred. It was in homage to the Darley and Godolphin Arabians that Sheikh Mohammed first dubbed his stable and breeding arm Darley, and later spun off an elite racing squadron called Godolphin.

Thunder Snow’s sire, Australian homebred Helmet, was a three-time Group 1 winner, twice at Randwick as a juvenile in the AJC Sires’ Produce (G1) and in the Champagne (G1) (despite veering sharply in deep stretch). But his crowning moment came in the Caulfield Guineas (G1) at three, when the speedy colt went to the front and resolutely held on in stakes-record time over the metric mile.

See clips of his Group 1 hat trick in this Darley promotional video:

Helmet shipped straight from Australia to Dubai for the 2012 UAE Derby, but his form was declining at the time and he faded to a subpar 12th. Now a shuttle stallion dividing his time between Sheikh Mohammed’s Dalham Hall Stud in Newmarket and Darley Australia, he’s off to a rollicking start at stud.

Helmet is in turn by Australian champion sprinter Exceed and Excel. Ten days after his front-running victory in the 2004 Newmarket H. (G1) at Flemington, it was revealed that the son of Danehill (by Danzig) had been acquired by Sheikh Mohammed. The price was reportedly an Australian record A$22 million. He was worth it, for Exceed and Excel has become an outstanding sire under the Darley banner in both hemispheres.

Interestingly, Exceed and Excel’s pedigree has a strong American flavor to it, top and bottom. His broodmare sire, Lomond, was a Northern Dancer half-brother to 1977 Triple Crown winner Seattle Slew. And Exceed and Excel’s second dam carries within her some strains that aren’t often seen these days -- 1948 Triple Crown legend Citation and 1961 Kentucky Derby and Preakness hero Carry Back. Further back, Exceed and Excel traces to a full sister to the great American speed vector, Domino.

Helmet’s dam, British-bred Accessories, had more European elements in her background. She was a total Darley production, for both of her parents were homebreds as well. She’s by the globetrotting champion Singspiel (himself bred by Sheikh Mohammed from his homebred In the Wings and prized acquisition Glorious Song) and out of influential matron Anna Matrushka, a homebred daughter of the great Mill Reef and two-time German champion Anna Paola.

Thunder Snow’s dam, Eastern Joy, was likewise a homebred for Darley. She’s proving to be a prolific producer, with her first four foals all being stakes winners of Group class. Always Smile, her second foal, earned a stakes victory over males at York and twice placed at the Group 1 level last year, and her third foal, First Victory, had scored in Newmarket’s Oh So Sharp (G3) as a juvenile in 2015. Thunder Snow became Eastern Joy’s first Group 1 winner, and by adding the UAE Derby to half-sister Ihtimal’s UAE Oaks, he gave their dam a unique UAE classic double.

Although she was bred in Great Britain, Eastern Joy’s nearest forbears are American-bred. Her sire, Dubai Destination, hailed from the Bluegrass' historic Calumet Farm. By Kingmambo (son of Mr. Prospector and Hall of Famer Miesque), Dubai Destination was sold to Sheikh Mohammed for $1.5 million as a Keeneland July yearling.

As a reminder of just how long Sheikh Mohammed has been pursuing the Kentucky Derby, Dubai Destination – Thunder Snow’s maternal grandsire – was nominated to the 2002 Triple Crown. The Godolphin runner ended up staying in Europe for the duration of his career, highlighted by a victory in the 2003 Queen Anne (G1) at Royal Ascot (the same prestigious mile race won by Tepin last year). Godolphin acquired Dubai Destination’s half-brother from Calumet, Librettist, who became a French champion miler in 2006. Sheikh Mohammed also snared their dam, Mysterial, and bred Group 3 winner Secret Number from her.

Eastern Joy was out of another Sheikh Mohammed acquisition, Red Slippers, whom he purchased privately from Robert Sangster’s Swettenham Stud as a winning juvenile. She was a Kentucky-bred daughter of Nureyev and Morning Devotion, herself by 1978 Triple Crown winner Affirmed and out of a half-sister to 1978 champion two-year-old filly It’s in the Air.

Although Red Slippers went on to win the 1992 Sun Chariot (G2) for Sheikh Mohammed, it was a subsequent daughter of Morning Devotion who would become a legend for his fledgling Godolphin team: Balanchine. She too was obtained from Sangster after shaping with promise as a juvenile in 1993, but Balanchine already looked better than her older half-sibling when taking her first two starts by a combined margin of 10 lengths.

Sheikh Mohammed’s inspiration behind Godolphin was to ship some of the Maktoum family’s top prospects away from the British winter to the warmth and sun of Dubai, where they could prepare for the European season. The idea was met with skepticism in some quarters.

But Balanchine, who spent the winter of 1993-94 in Dubai, validated the concept straightaway by delivering a pair of stunning classic successes. After just missing in the 1000 Guineas at Newmarket, she scored a dynamic victory in the Oaks at Epsom, defeating a certain filly named Wind in Her Hair (the future dam of Japanese legend Deep Impact). Balanchine then conquered the boys in the Irish Derby (G1), becoming only the second filly in 94 years to win the Curragh classic.

“This experiment has obviously worked,” Sheikh Mohammed told The Independent following Balanchine’s Oaks. “We will now have to think about campaigning horses from Dubai all over the world.”

Next came the creation of Dubai, not just as a winter training center, but as a premier racing destination. The inaugural Dubai World Cup was staged in 1996, and the extravaganza of “World Cup night,” with additional major prizes, began to take off around the turn of the millennium.

One of those new races on the World Cup card was the UAE Derby. Established in 2000, it has served as a launching pad for a dozen Kentucky Derby participants, six of them representing Godolphin. None of them has hit the board yet in the Derby, underscoring the challenge of mounting an assault on America’s most storied race from abroad.

Yet it is precisely that challenge that drives Sheikh Mohammed. Godolphin has undergone further evolution since its initial phase as a Dubai wintering venture. Through it all, Sheikh Mohammed strives to maintain Godolphin’s hallmark of quality, and Thunder Snow has that in abundance.

As significant as the stats are against Dubai runners in the Kentucky Derby, one day the right horse, in the right combination of circumstances, just might rewrite the record book. Maybe a relative of Balanchine. 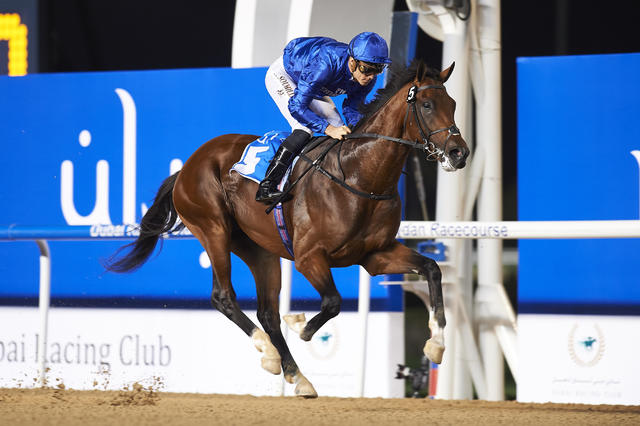