Tales from the Crib: Tiz the Law 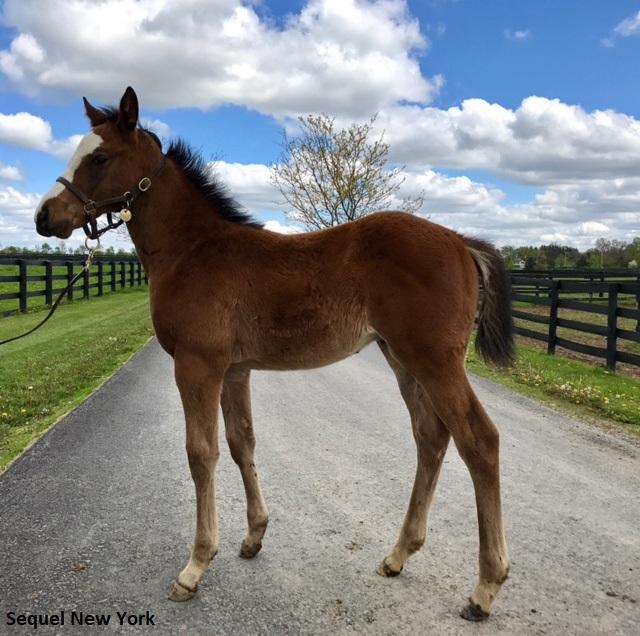 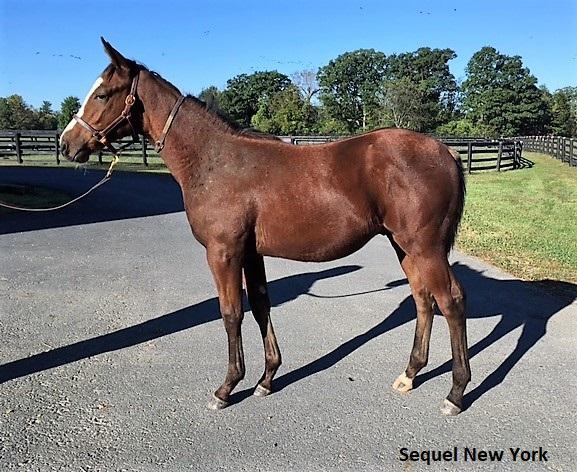 Tiz the Law as a weanling (Sequel New York) 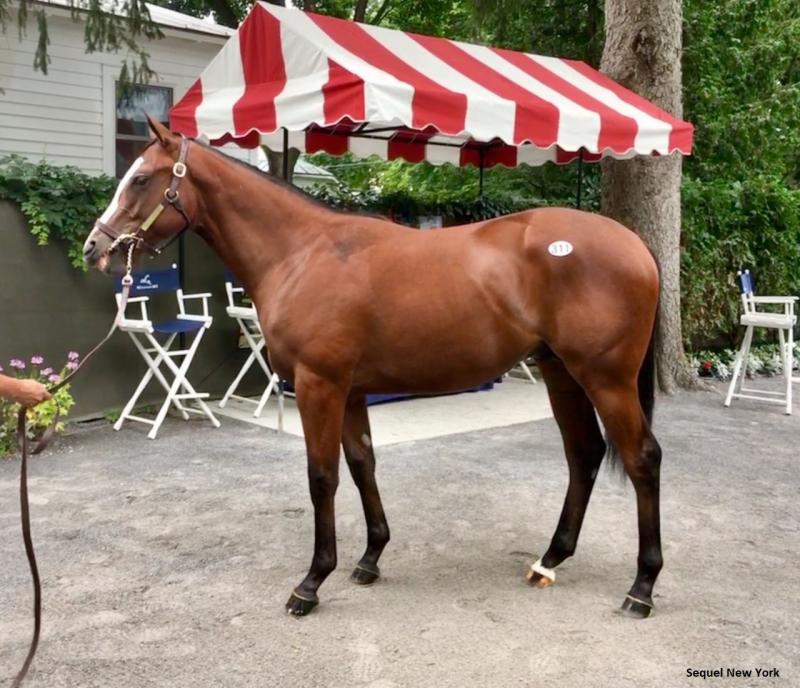 As a New York-bred campaigned by Sackatoga Stable and trained by Barclay Tagg, Tiz the Law naturally elicits comparisons to their past champion Funny Cide. But the 2020 contender presents contrasts as well with the 2003 Kentucky Derby (G1) and Preakness (G1) star – beginning with the fact that Tiz the Law is still a colt, unlike the gelded Funny Cide.

Both Funny Cide and Tiz the Law hailed from the first crop of their respective sires. Funny Cide was an early indicator of Distorted Humor’s success at stud, and Tiz the Law is similarly part of a blockbuster group for his freshman sire Constitution.

There’s a genetic connection between them too. Constitution is out of a mare by Distorted Humor, as explained in greater detail in Tiz the Law’s “Pedigree fun facts.” And both Constitution and Distorted Humor stand at WinStar Farm near Versailles, Kentucky.

Funny Cide, although foaled in New York, was a WinStar-bred. Tiz the Law was likewise bred by a Bluegrass farm, Twin Creeks, but born in the Empire State.

Constitution, a $400,000 yearling purchase at Fasig-Tipton’s boutique Saratoga sale, was a prominent player on the 2014 Triple Crown trail when capturing the Florida Derby (G1). The son of Tapit ended up missing the classics due to injury, but later went on to add the 2015 Donn to his resume.

As their standouts began retiring to stud, the Twin Creeks partners were looking for suitable mares to support them. One such mare was Tizfiz, a Grade 2 winner on turf who bankrolled $410,944. A daughter of two-time Breeders’ Cup Classic (G1) victor and Hall of Famer Tiznow, Tizfiz is in turn out of a mare by 1994 Kentucky Derby surprise Go for Gin. Twin Creeks bought Tizfiz, then a 10-year-old broodmare, for $125,000 at the 2014 Keeneland November Breeding Stock Sale.

After visiting Constitution in the spring of 2016, Tizfiz produced her bay colt on March 19, 2017, at Sequel New York. That Hudson farm is also the stud home to a couple of Twin Creeks stallions, Mission Impazible and Destin. Tizfiz, then booked back to Mission Impazible, was thus on the scene in advance of her next mating. (The result of that tryst is now a 2-year-old filly named Angel Oak that Twin Creeks is keeping to race themselves.)

Tiz the Law later shipped to his Kentucky home, and Gullatt described him as the kind of horse they love to raise. 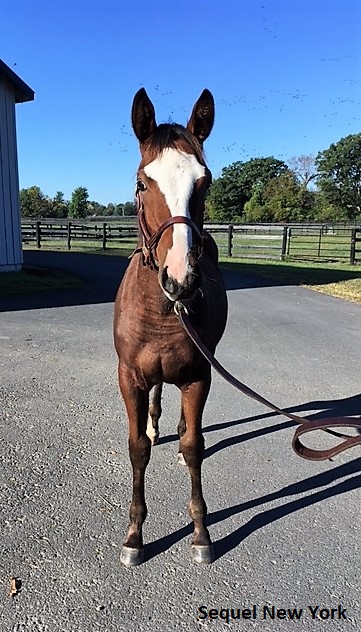 “He just never did anything wrong,” Gullatt said. “He was a very happy horse – full of energy, eager to please, easy to work with, easy to manage.”

The yet-unnamed colt remained at Twin Creeks through the summer of his yearling year, as he prepared for his date with the sales ring. He was cataloged, as part of the Sequel New York consignment, in the same auction that produced Funny Cide – Fasig-Tipton’s New York Bred Sale.

Jack Knowlton of Sackatoga Stable went to $110,000 to secure the blaze-faced bay, and the partners celebrated by posing for what was light-heartedly dubbed a “future win picture.” The Twin Creeks team was delighted that he’d race for New York-based connections, thereby competing for the valuable state-bred purses and concomitant breeders’ awards. 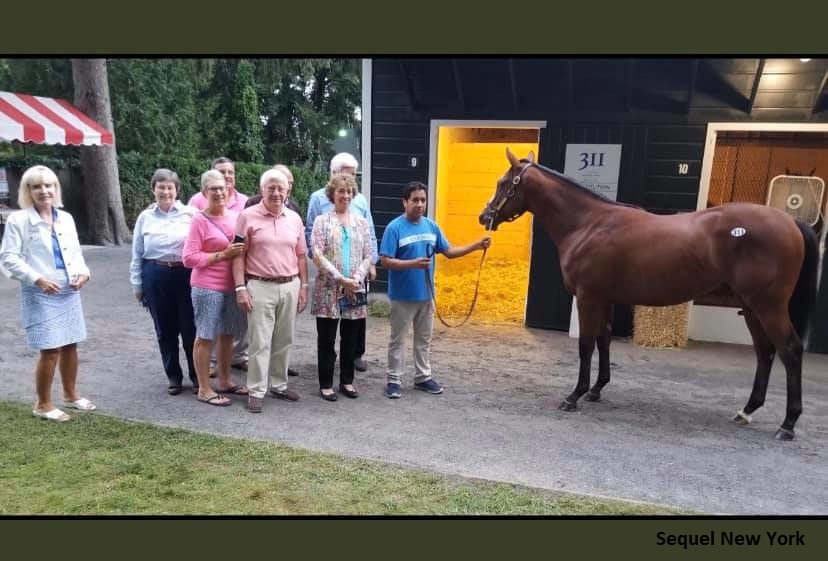 Tony Everard and his brother had bought Funny Cide from that 2001 Fasig-Tipton sale for $22,000, and it was his sister-in-law, Helen, who gave him the name that would become famous. Gelded because he was a ridgling (with one undescended testicle that likely would have caused problems), Funny Cide developed beautifully at their training center. There he caught Tagg’s eye, and the trainer eventually bought him privately (for a reported $75,000) for the Sackatoga partners.

Tiz the Law was different from the strapping, strong-willed Funny Cide in both physique and demeanor. Everard found Tiz the Law to be just like Gullatt had remembered him as a youngster – easy to handle.

“Not a big horse – a small horse, but very smart,” Everard recalled. “He was the quietest horse I ever broke.”

That’s saying something, since the Irish native and one-time manager of George Steinbrenner’s Kinsman Farm has been tutoring horses for decades. Long before Funny Cide came along, Everard had graduated the likes of Timely Writer, the “Sultan of Saratoga” Fourstardave, and Fourstars Allstar, who scored an historic victory as an American shipper in the 1991 Irish 2000 Guineas (G1).

Tiz the Law was so accommodating that Everard had no trouble putting a “green rider” on him, and they’d get along just fine. Funny Cide, on the other hand, would have overpowered an inexperienced rider.

“Funny Cide grew into a big, strong-looking horse, a different type of horse,” Everard said. “It took a good rider to handle him,” like Tagg’s partner Robin Smullen.

Another contrast emerged once Tiz the Law began his racing career with Tagg. Both romped in their debuts versus fellow New York-breds, but Funny Cide stuck to state-restricted company as a juvenile. Tiz the Law immediately jumped to the top level and dominated the Champagne (G1). Although a troubled trip in the slop contributed to his loss in the Kentucky Jockey Club (G2), Tiz the Law bounced back with a terrific victory in the Holy Bull (G3).

At this point in 2003, Funny Cide had just finished fifth in the Holy Bull in his first graded attempt. The popular gelding would improve through the spring, winning the first two jewels of the Triple Crown before finishing third in the Belmont.

Tiz the Law might be ahead of where Funny Cide was on the curve in February 17 years ago, but he’ll need to maintain his progress to wear the roses come May.

Everard sums up the efforts to compare the two different specimens:

“No comparison – except their heart.”

And that’s what counts. 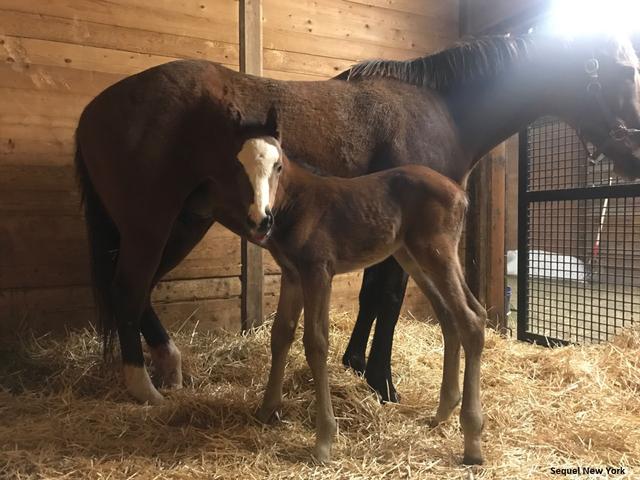