Ten two-year-old colts to get excited about

The official Road to the Kentucky Derby doesn’t begin until mid-September, so many of the runners who will enter the starting gate for Kentucky Derby 145 are horses we haven’t even heard of yet.

Led by prospects trained by five-time Kentucky Derby and two-time Triple Crown winner Bob Baffert and his California counterpart Jerry Hollendorfer, the West appears to be loaded, but we’ve also seen quite a few talented babies on the opposite coast.

Labor Day editions of a pair of Grade 1s – the Hopeful at Saratoga and the Del Mar Futurity at Del Mar – may provide some temporary clarity, but when the dust begins to settle this spring, it’s the horses with the ability to stretch out successfully who will take that next, critical step.

Turned heads when he broke his maiden at first asking by 10 lengths at Los Alamitos and he further legitimized himself by winning the Best Pal (G2) at Del Mar just as easily. He earned a 100 BRIS Speed figure in that stakes debut and did so under wraps. He’s a freak.

Pedigree – By Into Mischief, second foal to race out of Assets of War by Lawyer Ron. Sold for $190,000 as a yearling and was flipped for $1.2 million as a two-year-old in training. His dam won just once (a sprint) from 13 lifetime starts. She has two siblings who earned more than $100,000, but otherwise limited productivity. His granddam, Added Asset, was a Grade 3-winning earner of over $330,000 and she has several productive siblings.

There was lots of backstretch buzz heading into his debut, and he certainly didn’t disappoint. Off a step slow in his debut, he was forced to stalk and pounce from a couple of lengths off the pace, but the result was a 4 1/4-length victory with plenty left in the tank, and he earned a 96 BRIS Speed figure in the process. Also, a freak.

Pedigree – By Quality Road, fourth foal to race out of Ghost Dancing by Silver Ghost. Sold for $525,000 as a yearling. He’s a half to 2017 Manhattan (G1) winner Ascend and Grade 3-placed Moro Tap, both of whom made their mark on turf. His dam, Ghost Dancing, who scored a minor stakes win sprinting on the turf, won five of nine lifetime and earned just shy of $164,000. She has three siblings who earned over $100,000, and the family tilts towards shorter distances.

Bumped at the start of his debut, he was urged a bit early to secure position before taking full command mid-turn. He switched leads smoothly and won under a mild hand ride, earning a 101 BRIS Speed figure in the process. He’s not in action this weekend, so chances are he’ll offer some Breeders’ Cup Future Pool value. Count me in!

Pedigree – By Union Rags, second foal to race out of Tanglewood Tale by Tale of the Cat. Sold for $90,000 as a yearling and flipped for $925,000 as a two-year-old in training. Full brother Big Thicket is a productive, yet unspectacular, router. His dam, Tanglewood Tale, was a productive router who earned $200,000 in 18 starts.

Hung four wide in his first and only start, he took over in hand, switched leads on cue and earned a 92 BRIS Speed figure in winning comfortably over the Jerry Hollendorfer-trained 4-5 favorite Dueling, who had finished a fast-closing second the start before behind stablemate Rowaytan. There is some route in Game Winner’s pedigree and he looks like one to keep a serious eye on.

Pedigree – By Candy Ride, second foal to race out of Indyan Giving by A.P. Indy. Sold for $110,000 as a yearling. His half-brother Flagstaff is a promising four-year-old gelding who has made only three starts. His dam, Indyan Giving, is unraced, but granddam Fleet Indian won 13 of 19 lifetime starts, including the Personal Ensign (G1), banked more than $1.7 million and was honored with an Eclipse Award as the 2006 champion older mare.

An even fifth behind Roadster in his debut over six furlongs, the gray colt improved immensely when stretched out to a mile in the follow-up start. Pressing the pace early, he took full command on the turn and defeated the 9-5 favorite Jefe by nearly seven lengths (96 BRIS Speed figure) and it was 11 1/2 lengths back to the show horse. He’s not as sexy as some of more well-bred prospects on this list, but I know what I saw, and I liked it.

Pedigree – By Exchange Rate, fifth foal to race out of Classofsixtythree by Include. A $85,000 RNA as a yearling, he sold for $225,000 as a two-year-old in training. Four siblings have earned less than $100K combined. His dam, Classofsixtythree, was Grade 1-placed and earned just shy of $200,000, but none of her four siblings to race banked more than $65,000.

Bet down to 4-5 against nine rivals in the debut, he did not disappoint his backers, but of the 10 horses on this list, he was probably the least impressive visually. Away from the cozy outside post cleanly, he enjoyed a perfect pressing trip before taking the lead off the turn for home. He quickly built a comfortable margin, but was on the wrong lead most of the stretch while drifting in (88 BRIS Speed figure). He can certainly straighten out any flaws with experience.

Pedigree – By Into Mischief, first foal out of Rosemonde by Indian Charlie. A $320,000 yearling purchase. Unraced dam, Rosemonde, is a half to the versatile nine-for-24, $520,000 earner and dual Canadian champion Miss Mischief, who is also by Into Mischief. Rosemonde is also a half to two others who earned over $130,000.

Second best in his June 10 debut behind eventual Ellis Park Juvenile runner-up Whiskey Echo, he returned eight weeks later to score one of the most impressive juvenile wins to date. Steadied and shuffled back slightly early on, he took over and drew off to win by nearly 10 lengths, earning a 96 BRIS Speed figure. I like his chances not only in the Hopeful, but to stretch out his talents moving forward.

Bred to route, and perhaps on grass, this gorgeous gray debuted with a sprint win way back on June 7 at Churchill Downs . Ridden from the outset but trailing last of the field of six early, he circled the field and won going away. His 83 BRIS Speed figure is dwarfed by the other horses on this list but, by all accounts, he should only become more dangerous with added distance. Don’t be discouraged if he runs just an average race on Monday. His best days should be much further in front of him.

Pedigree – By Tapit, seventh foal to race out of To Dream About by Monarchos. John Oxley homebred. Full brother to 2017 Del Mar Oaks (G1) winner Dream Dancing, who has the vast majority of her $483,000 bankroll on turf, and a half-brother to three others who have earned over $99,000. His dam, To Dream About, was unraced, but she’s a half to a pair of $400,000+ earners, both of whom were dirt routers. His granddam Beautiful Pleasure won six Grade 1s, including the Breeders’ Cup Distaff (G1) , en route to earning more than $2.7 million and being honored with an Eclipse Award as the 1999 champion older mare.

Off slowly in his career debut at Churchill, he would just miss behind eventual Sanford (G3) runner-up Strike Silver. He broke much more alertly the second time around, and was urged to show speed and hold position at the rail before extending the margin of victory to 3 1/4 lengths at the wire (90 BRIS Speed figure). The short comment says he won “driving,” but I counted only three taps of the whip. It was mostly a strong hand ride. Very talented, but I’m thinking sprinter.

Pedigree – Tapit, first foal out of Speedinthruthecity by City Zip. Winchell Thoroughbreds homebred, partnered with Stonestreet Stables to race. Minor stakes-winning and graded-placed sprint dam Speedinthruthecity was seven-for-19 in her career and earned just over $400,000. Her only sibling of note is the versatile $134,000 earner Next Exit.

Dismissed at odds of 8-1 in his debut, due in part to the obscure pedigree, he broke a step slowly before settling into a stalking position. In tight at the rail, he came out at the top of the stretch, ground down the leader, and drew away late (90 BRIS Speed figure). He was under a ride most of the way, which hints at a desire for more ground. 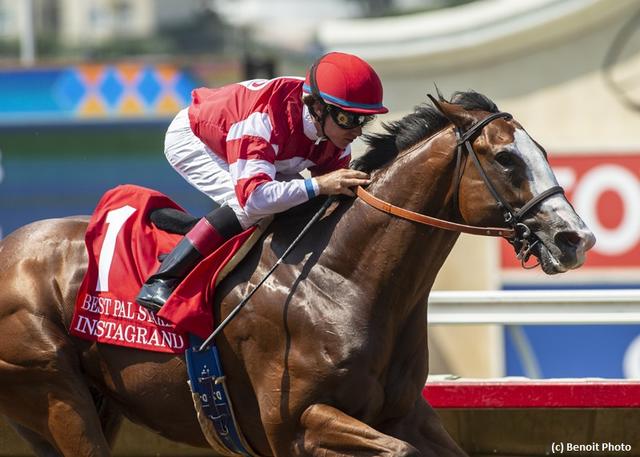