The Breeders' Cup Juvenile Expert Pick of the Week

A field of nine two-year-olds will contest Friday’s $2 million Breeders’ Cup Juvenile (G1) at Santa Anita. The 1 1/16-mile test is led by three super-impressive prep winners, and it seems likely one of those will rise to the occasion and be the front runner for the Eclipse Award at the end of the season. Eight Rings is among the group and has been tabbed the Expert Pick of the Week.

Trained by Bob Baffert, the $520,000 yearling purchase debuted at Del Mar on August 4 in a maiden special weight event and gave his foes little chance. The dark bay son of Empire Maker took command nearing the turn for home in the 5 ½-furlong dash and poured it on down the stretch to a 6 ¼-length score. The Kentucky-bred earned a hefty 100 BRIS Speed number for his fine work.

Eight Rings returned as the heavy favorite in the subsequent Del Mar Futurity (G1), but he unseated his rider in the early stages. The colt avoided injury and despite the mishap, the talented youngster went postward as the 6-5 choice in the American Pharoah Stakes (G1) at Santa Anita while being equipped with blinkers for the initial time.

The handsome colt broke best to lead and was never challenged leading all the way, eventually crossing the wire six lengths on top under John Velazquez. And, according to his pilot, Eight Rings has much more to offer.

“He’s still not 100 percent confident in what he needs to do.” stated Velazquez. “If he can put his mind to running, he’ll be a dangerous horse.”

Baffert has already saddled four winners of the Breeders’ Cup Juvenile, including a pair when the race was held at The Great Race Place with Midshipman (2008) and New Year’s Day (2013).

On Friday, Eight Rings has a decisive edge over his major foes with his natural early foot. The colt figures to be clear early on and is a prime candidate to lead at every call.

Eight Rings winning the Breeders’ Cup Juvenile in wire-to-wire fashion is the Free Pick of the Week. 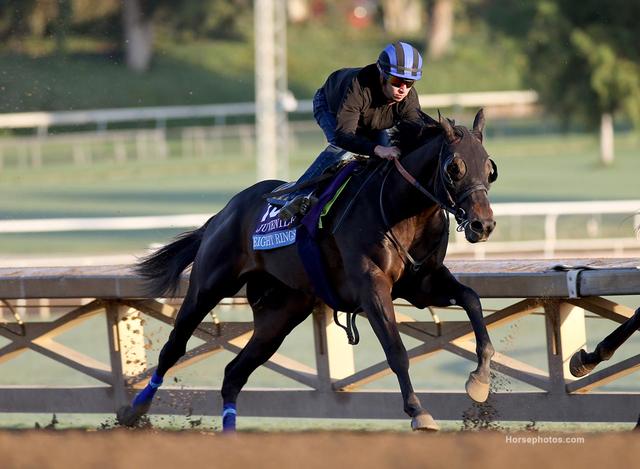