Like any popular sporting and social event that just happens to be more than 140 years old, the Kentucky Derby is steeped in tradition. Indeed, the large throng in attendance and the millions viewing on television can't escape the annual rituals and pageantry that have become familiar to multiple generations of racing fans and once-a-year visitors/viewers alike.

What are the five best Kentucky Derby traditions? While opinions differ, these ones are hard to beat:

The date: No one ever really has to ask, "When is the Kentucky Derby?" With rare exceptions since the 1930s, the Derby has been held without fail on the first Saturday in May. No other major sporting event, from the World Series to the Super Bowl, is so closely associated with a particular day and month as the Derby. Although the occasional boxing match tries to muscle in, the day truly belongs to the "Greatest Two Minutes in Sports."

The backdrop: The Twin Spires atop the Churchill Downs grandstand have greeted attendees and have been passed by every Derby winner since 1895. One of the most iconic symbols in the sporting world, they are synonymous with the Derby itself and a must-use in any scenic photograph.

The song: The Kentucky Derby field walk onto the track and parade in front of the stands with a chorus of thousands singing "My Old Kentucky Home." Stephen Foster's 19th century ballad has been mainstay at the Derby since at least 1930, and is the official state song for the commonwealth of Kentucky.

The garland: The Kentucky Derby was long ago dubbed "The Run for the Roses." More than 400 of the red flowers are sewn on a green satin blanket and draped around the neck of the victorious horse in the winner's circle. Churchill Downs records indicate the rose was made the official flower of the Kentucky Derby in 1904, and the garland as it exists today was first adorned by 1932 winner Burgoo King.

The drink: No matter what one personally thinks of the mint julep, the concoction of bourbon, sugar, and mint is now world-renowned due to its association with the Kentucky Derby. It's popular, too, with more than 120,000 of them served on Kentucky Oaks and Kentucky Derby days combined. 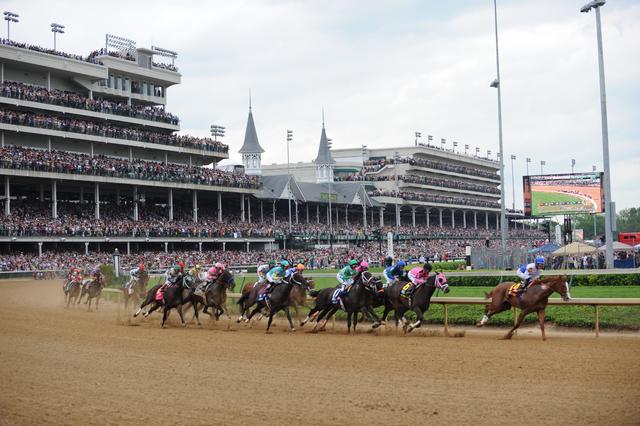