The Grass Is Blue mows them down in Busanda

Despite pulling early in first-time blinkers, Louis Lazzinnaro’s The Grass Is Blue still packed a punch late in Sunday’s $97,000 Busanda Stakes at Aqueduct. The 1.75-1 favorite rallied past Coffee Bar to earn her first stakes victory, along with 10 points toward the Kentucky Oaks (G1).

Trained by Chad Brown, The Grass Is Blue was adding blinkers after coming up just short in a three-way finish in the Dec. 26 Anne Arundel County at Laurel. The equipment change was designed to help her focus, but it also had the effect of getting her keyed up, and jockey Manny Franco had to keep wrangling as the headstrong filly stalked in third.

The two Todd Pletcher runners went forward, with Traffic Lane intent on leading, and Coffee Bar content to track her stablemate. Although Traffic Lane carved out slow fractions, she came up empty when Coffee Bar challenged her in the stretch.
The Grass Is Blue was clearly full of run behind them, just needing a way out. Yet she didn’t make Franco’s job easy, and he did his best to steer her safely around into the clear. Picking up strongly seeing daylight, The Grass Is Blue mowed Coffee Bar down by a length to finish 1 1/8 miles in 1:54.90.
Coffee Bar garnered 4 points for finishing easily best of the rest. Five lengths back in third came Diamond Ore, Arrogate’s half-sister by Tapit, who closed from last to take 2 points. Traffic Lane tired to fourth, good for 1 point, and Wonderwall trailed the small field of five.

The Grass Is Blue improved her resume to 5-3-0-1, $121,978. The $20,000 Keeneland September yearling made her first career start for Nadine Schnoor and John Stephens, in a $25,000 maiden claimer at Monmouth last July. After crushing that field by 8 1/2 lengths, she was acquired by her current connections and transferred to Brown. The Grass Is Blue went straight to a second-level allowance at Keeneland, where she won again by daylight, and warranted another step up to stakes competition.

In the Nov. 6 Songbird on Breeders’ Cup Friday, at the same track and 6 1/2-furlong trip, The Grass Is Blue didn’t get away cleanly and wound up sixth. She stretched out to two turns in the Anne Arundel County, and almost overcame a wide trip. The Busanda marked a breakthrough, if suggesting she’s still a work in progress.
The Grass Is Blue was capping a big weekend for her breeders, Phillips Racing Partnership, also responsible for Saturday’s Pegasus World Cup Turf Invitational (G1) hero Colonel Liam. Both trace to the same influential matron, Soaring, by 1955 Kentucky Derby legend Swaps.
By Broken Vow, The Grass Is Blue is out of the stakes-placed Shine Softly, herself a daughter of champions Aldebaran and Soaring Softly. 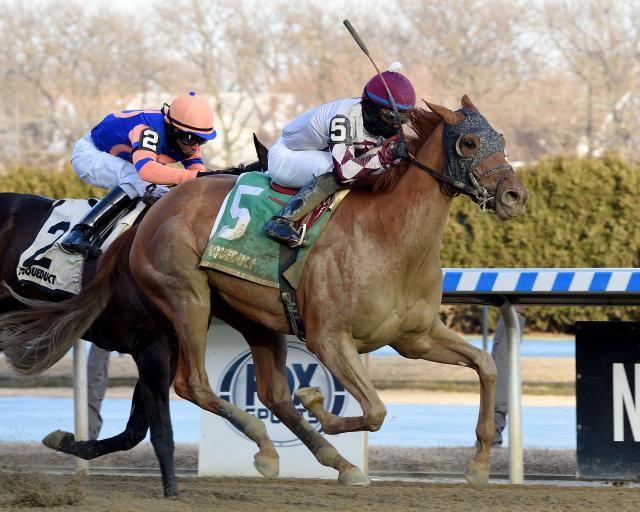