The importance of post position in the Kentucky Derby

Often the last piece of Kentucky Derby handicapping information available to bettors, the post position draw is closely watched and heavily scrutinized. What constitutes a good draw and a bad draw depends on the individual horse, its running style, and the race strategy the connections hope to employ. In recent times, horsemen have been generally satisfied with just about any position in the starting gate with the exception of posts 1 and 20.

Post 1 for many years had the distinction of yielding the most Kentucky Derby winners. However, only Ferdinand (1986) has won from that post since 1964. These days, when full fields of close to 20 have become the norm, post 1 is seen as a disadvantage as whoever breaks from there literally faces the prospect of running into the inner rail not too many strides out of the gate. The horse will either have to break very quickly and get ahead of his rivals to avoid getting shuffled back, which is more unlikely than not, or will have to be taken back to avoid getting squeezed down inside, which means yielding precious tactical position.

A recent example of how bad post 1 can be occurred in 2010 when lukewarm favorite Lookin at Lucky was relentlessly hampered and squeezed passing the stands for the first time. The horse never recovered from that early trouble and finished off the board, but proved the best of his generation when rebounding to take the Preakness two weeks later.

Post 2 hasn't been much better of late. It has not yielded a winner since Affirmed in 1978, and the most recent horse to hit the board from there was the deep-closing Revolutionary in 2013.

The outermost post, 20, sees the horse breaking very close to the outside rail. Again, the forced use of early speed to secure decent position is one option, or taking far back and losing a lot of ground is the other. Big Brown, who was generally several lengths superior to everyone else in his crop, in 2008 became the first horse ever to win from that post, but as the Derby is generally more contentious horsemen hope to avoid the 20 if at all possible (although they will take 20 over 1 if given the option).

Horses breaking from the auxiliary gate (posts 15-20) at one time were viewed as being at a disadvantage, but recent winners Big Brown, Animal Kingdom, I'll Have Another, and American Pharoah have all won from there. The odd exception is post 17, which has not yielded any winner.

Posts 5-10 (with 6 being somewhat of a statistical anomaly) are generally the most coveted with in-the-money percentages of 20 percent or higher. Posts 13-16 have also become increasingly popular, especially with a slight gap between post 14, which is the last stall of the main gate, and post 15, which is the first in the auxiliary gate.

Unless your selection draws either post 1 or 20, chances are a defeat won't be solely the result of the post draw. 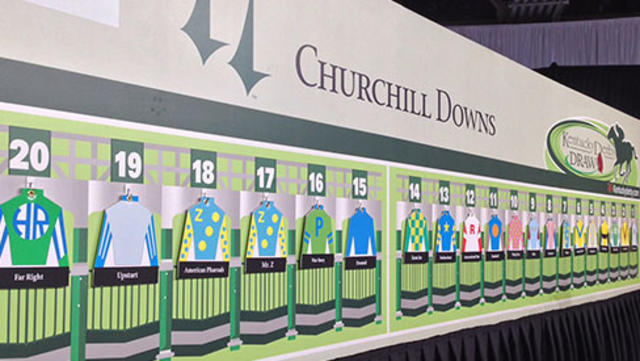