The last grade 1 race for 3-year-old dirt males, the Pennsylvania Derby, is being staged Saturday, but there are more runners from this year’s Kentucky Derby field that are instead contesting a grade 3 race many miles to the west this weekend.

The $500,000 Oklahoma Derby, which runs Sunday at Remington Park, features three horses that ran on the First Saturday in May, including one of the major players that day, while just two Derby runners are contesting the Pennsylvania Derby at Parx.

Battle of Midway, the third-place finisher in the Kentucky Derby, is the 2-1 morning-line favorite for the Oklahoma Derby, run at level weights over 1 1/8 miles. Since the Derby he has won the Affirmed Stakes (G3) and the Shared Belief Stakes in California, though he was a little disappointing when sixth in the Haskell Invitational (G1).

The horse that won the Haskell, fellow Derby runner Girvin, takes him on again at Remington Park. A quarter-crack in his right front hoof leading into the Derby probably explained his disappointing 13th place finish that day. He bounced back soon after, finishing second by a nose to Irap in the Ohio Derby and then winning the Haskell before a disappointing 11th in the Travers Stakes (G1). If he returns to his best he will be highly competitive.

The third Derby runner in the field is Untrapped, who finished 12th in the Derby. He has raced just twice since then, finishing third in both the Ohio Derby and Indiana Derby (G3).

The best-performed of those opposing the Derby trio is West Virginia Derby (G3) winner Colonelsdarktemper.

Irap is one of two Derby runners set to contest the $1 million Pennsylvania Derby, also run at 1 1/8 miles. With victories in the Ohio Derby and Indiana Derby and a third-place finish in the Travers Stakes, he has been one of the most consistent 3-year-olds since the Triple Crown races finished. He is the 3-1 morning-line second favorite.

The other Derby runner is the 9-2 chance Irish War Cry. On his day he’s among the best, as he was when winning the Wood Memorial (G1) and finishing second in the Belmont Stakes (G1), but he’s frustratingly difficult to follow.

West Coast is the 8-5 morning-line favorite after his decisive Travers Stakes victory. He didn’t run in any Triple Crown races but is on a four-win streak and victory here could be enough to secure him the Eclipse Award for Champion 3-Year-Old Male.

The Pennsylvania Derby has been a useful guide to the Breeders’ Cup Classic in the past; 2014 winner Bayern went on to win the Classic, while 2013 victor Will Take Charge finished second in the Classic by a nose to Mucho Macho Man. 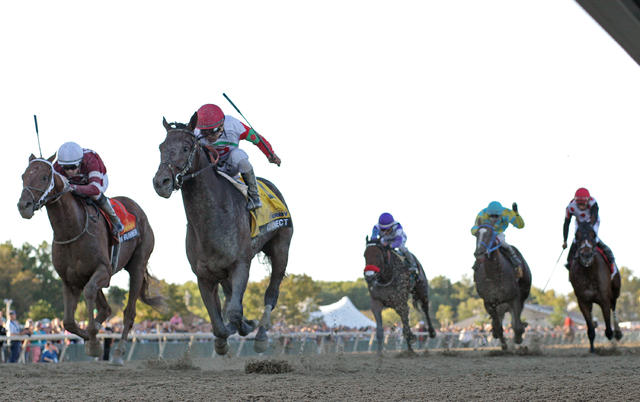