A huge day of racing with major Breeders’ Cup implications will be held at Belmont Park on Saturday. Four graded races will be contested, three of which are graded and part of the “Win and You’re In” Challenge Series.

Race 7 on the card is the Vosburgh Stakes (G1), which offers a berth in the Breeders’ Cup Sprint (G1). And the race looks like a free space to me. Alfred G. Vanderbilt (G1) romper #6 IMPERIAL HINT (1-5 odds) faces six horses in the Vosburgh and should dominate the competition.

The five-year-old son of Imperialism is among the top one-turn horses in training and proved his edge last time running with a tour-de-force at Saratoga. As a Luis Carvajal trainee, Imperial Hint has been brilliant throughout his career with 11 wins from 17 lifetime tries.

The Florida-bred is the reigning Breeders’ Cup Sprint (G1) runner-up and he faces his easiest field in some time. The lone graded winner in the group, won’t offer much in the win pool at miniscule odds. But he is a Pick-5 and Pick-6 single.

Race 4 on the card is a seven-furlong maiden special weight event for juveniles. Eight are entered and I think a first-time starter will win on debut. And the colt could be one to watch going forward, as well, if he runs like I expect him to.

#3 U S NAVY CROSS (2-1 odds) is from a fine Darby Dan family and lands in a most winnable spot today. A $550,000 auction priced son of Curlin, who has trained solely at Belmont in preparation of today’s start.

The two-year-old colt is kin to a trio of precocious Thoroughbreds including Taqarub, who romped to a trio of superb sprint wins to start his career.

Landing in a cast where his foes that have raced, have done little to inspire, U S Navy Cross should succeed at first asking. Jose Ortiz will be in the stirrups. 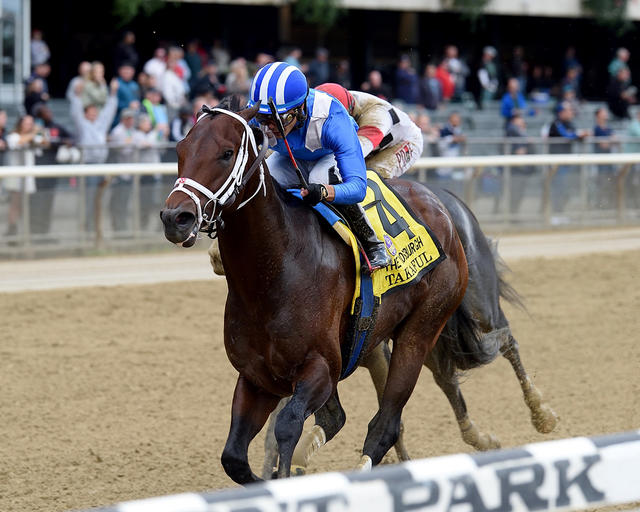