Thousand Words battles for Baffert milestone in Robert B. Lewis

Thousand Words extended his record to 3-for-3 in the Robert B. Lewis (Benoit Photo)

Eight of those wins have come in the Lewis, an especially fitting race for Baffert’s milestone. The late Bob and Beverly Lewis were among his supporters as he moved from training Quarter Horses to Thoroughbreds. And the first of Baffert’s five Kentucky Derby winners, Silver Charm (1997), raced in the Lewis colors.

Coming off a gutsy victory in the Los Alamitos Futurity (G2) in his stakes and two-turn debut, Thousand Words again displayed his mettle in the Lewis. The bay was reserved on the inside, behind front-running stablemate High Velocity, and still needed room turning for home. Regular rider Flavien Prat opted to peel out in hopes of a seam.

Thousand Words ended up muscling his way between High Velocity and the stalking Tizamagician, who could no longer hold his position. Once leveling off, the favorite wore down High Velocity and struck the front. Then a new threat emerged wider out in Royal Act, but Thousand Words held him at bay by three-quarters of a length in 1:43.64 for 1 1/16 miles.

The Lewis, worth 10 Derby points to the winner like the Los Alamitos Futurity, doubled Thousand Words’ points tally to 20. Royal Act, hitherto a turf performer, passed his dirt test to earn 4 points. The result was a triumph for the colts’ shared sire line – Thousand Words is by Pioneerof the Nile, the sire of American Pharoah, who is himself the sire of Royal Act.

High Velocity, a neck back in third, added 2 points for a total of 4. Although finishing much closer than his third in the Los Alamitos Futurity, he did not dispel the suspicion of distance limitations. Tizamagician picked up 1 point in fourth.

Thousand Words has amassed $211,000 from his 3-for-3 record. Although his dam, Grade 2 heroine Pomeroys Pistol, was a sprinter, he’s inheriting stamina from Pioneerof the Nile.

“Prat says he is getting better, he was a sort of immature colt,” Baffert said of the Hardacre Farm-bred. “He grinds and you gotta really work at him. Being stuck down inside, he got the worst of it. Usually a young horse like that they don’t run that well and they don’t respond.

“He’s got that big long stride and the further the better with him. You could tell about the last 50 yards he was really getting going. He came back he wasn’t even tired so that is a good sign. He is progressing with every race and to win three in a row like that it is pretty impressive.”

The Hall of Famer also reflected upon the 3,000-win mark:

“I’ve always thought things happen for a reason. Running in the Bob Lewis, with a horse named Thousand Words and going for 3,000 wins. I mean you can’t make that up. I had a feeling it was gonna happen in this race, I’ve had a lot of good people work for me through the years, the first 50 wins were probably the hardest, 100 were life changers.

“I feel very blessed and fortunate that I’ve been able to last this in this business and do so well in this business after coming from the quarter horse business. I’ve never dreamt of coming into thoroughbreds, there was never one instant I was thinking about it. I came over with Mike Pegram and Hal Earnhardt who I still have after all these years – they are a big part of the team.” 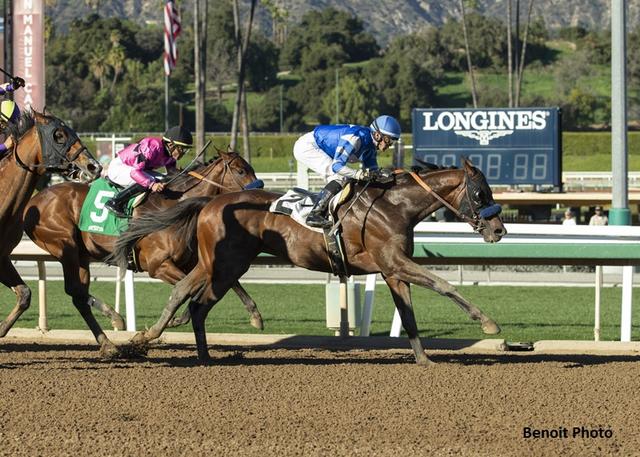