Forbidden Kingdom stretched out to two turns like a superstar, dominating by a 5 3/4-length margin, and the ease of victory was striking. To say his supporters are envisioning future glories would be an understatement.

He buried the opposition from the start, drawing off spectacularly while under a hold on the far turn, and Juan Hernandez just tried to keep his mount from losing focus through the stretch.

Speed to spare for longer distances

Similar to American Pharoah, Forbidden Kingdom’s female family is geared for shorter distances than the 1 1/4-mile Kentucky Derby. He passed the first two-turn test in the San Felipe with aplomb, but longer distances remain at least a minor concern.

The chestnut colt’s natural speed will be an asset.

Forbidden Kingdom displayed his dazzling quickness winning the seven-furlong San Vicente (G2) in his previous outing, reeling off :21.86 and :44.49 splits before drawing off in the stretch, and he effortlessly established :22.66 and :45.90 fractions in the San Felipe while several lengths clear.

Barring a bad break, no other Kentucky Derby prospect can run with Forbidden Kingdom during the early stages.

Also-rans stretched out behind winner

Doppelganger performed well for second, and remains a promising three-year-old moving forward, but he had no chance against a buzzsaw.

Off as the 8-5 second choice, Doppelganger launched a nice bid on the far turn and carried his momentum through the stretch, winding up nearly five lengths clear of third.

The field was strung out behind Forbidden Kingdom. Cabo Spirit, who was exiting a distant runner-up to Messier in the Robert B. Lewis (G3), finished more than 20 lengths behind the winner in fifth. 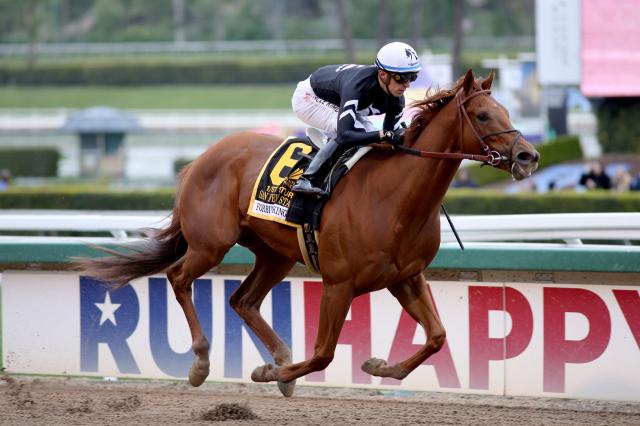