Three Takeaways from the 2021 Gotham Stakes

A 46-1 outsider in his first start since early December, Weyburn returned with a gutsy performance in his stakes debut, chasing the pace from the break and surging late to prevail by a nose.

His resilience was on full display – the last-out maiden winner came under ride nearing the conclusion of the far turn and appeared conquered when Crowded Trade rallied past to a short lead in upper stretch – and Weyburn received a commendable 104 Brisnet Speed rating after determinedly getting up along the inside.

By Pioneerof the Nile, the James Jerkens-trained colt established a moderate pace when breaking his maiden over a sloppy track in the previous start.  The runner-up and third-place finisher that afternoon had come back to run poorly in their next couple of outings, and Weyburn faced a significant class check in the Gotham.

Ontario-bred Weyburn was not originally nominated to the Triple Crown, but owner/breeder Chiefswood Stables is expected to make him a late nominee (March 29 deadline).

After winning the Gotham over a one-turn mile, Weyburn is eligible to make his first two-turn attempt in the $750,000 Wood Memorial S. (G2) on April 3, a major Kentucky Derby qualifier.

However, Jerkens isn’t ready yet to commit to the Wood. The Gotham was a taxing performance, and the conditioner won’t rush his improving colt.

“We’ll nominate to all of the obvious races, but we don’t know what we’re doing yet,” Jerkens told the NYRA Press Office Sunday morning.

Out of an A.P. Indy mare, Weyburn is bred to relish for longer distances – he counts Sunday Silence and Nijinsky II as his second and third maternal broodmare sires.

If the Kentucky Derby doesn't work out, the 1 1/2-mile Belmont Stakes on June 5 will be the goal for Weyburn.

Chad Brown came away encouraged by the efforts of Crowded Trade and Highly Motivated. The latter disappointed as the odds-on choice in his three-year-old opener, but Highly Motivated rallied for third after breaking poorly and being forced to check during the early stages.

Crowded Trade came up a little short, but he perhaps lost focus after making the lead in the stretch. The More Than Ready colt was making only his second career start, closing to win a six-furlong maiden at Aqueduct on Jan. 28.

Highly Motivated is headed to the Blue Grass S. (G2) at Keeneland on April 3. Crowded Trade will remain in New York for the Wood Memorial. 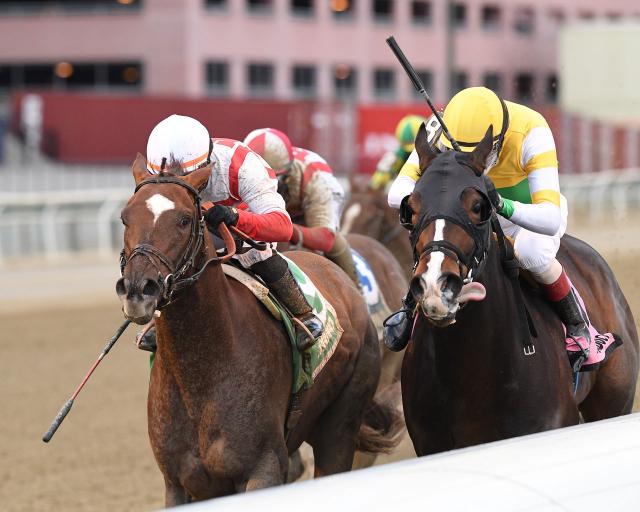