The second of two Road to the Kentucky Derby series qualifiers at Tampa Bay Downs, the March 7 Tampa Bay Derby (G2) awarded points on a 50-20-10-5 scale to the top four finishers.

Here are three takeaways from the Tampa Bay Derby:

1 – King Guillermo returned from a 98-day layoff, with no dirt form, to post a massive upset.

Unraced since November, the 3-year-old colt was winless on the main track, finishing a well-beaten sixth in his lone previous dirt start. He paid a $100.40 win mutuel after drawing off sharply to a 4 3/4-length decision in the Tampa Bay Derby.

Trained by Juan Avila, King Guillermo showed good speed from post 11 to establish a front-running position along the flank of the pacesetter and responded to the urgings of jockey Samy Camacho nearing the conclusion of the far turn, taking a short lead into the stretch. The bay son of Uncle Mo finished powerfully to register a 102 Brisnet Speed rating, and he guaranteed himself a spot in the Kentucky Derby field with the 50-point prize for the qualifying race.

2 – Victor Martinez will have a horse in the Kentucky Derby

Former baseball star Victor Martinez purchased King Guillermo for $150,000 at last year’s OBS April two-year-old sale, and the horse provides a terrific storyline for this year’s Kentucky Derby. Martinez races under the banner of Victoria’s Ranch, which honors his three daughters, and he named King Guillermo for his late father. These aren’t high-profile connections in Thoroughbred racing – Martinez, Avila, and Camacho are readying for their first Kentucky Derby appearance.

Avila indicated King Guillermo may forgo the final round of major prep races and train up to the May 2 Kentucky Derby off an eight-week freshening, citing how well his pupil ran in the Tampa Bay Derby following a layoff. That’s an unorthodox strategy considering most Kentucky Derby winners participate in the final round of prep races, with six weeks being the lengthiest freshening this century.

While never a threat to King Guillermo, who was gone by midstretch, Sam F. Davis (G3) hero Sole Volante offered a commendable turn of foot to rally past more than half the field in the final quarter-mile. He was forced to negotiate his way through traffic in a 12-horse Tampa Bay Derby field after dropping far back in the early stages, and registered a 108 Brisnet Late Pace rating finishing a clear second, the same number he earned winning the Davis.

Considering Sole Volante will be looking to rally into a potentially hot and contested pace in a 20-horse Kentucky Derby field, the Tampa Bay Derby looked like a positive learning experience. The late runner continues to progress since switching from turf to dirt this winter, and with triple-digit Brisnet Speed and Late Pace numbers to his credit, Sole Volante rates as a serious contender exiting the Tampa Bay Derby. 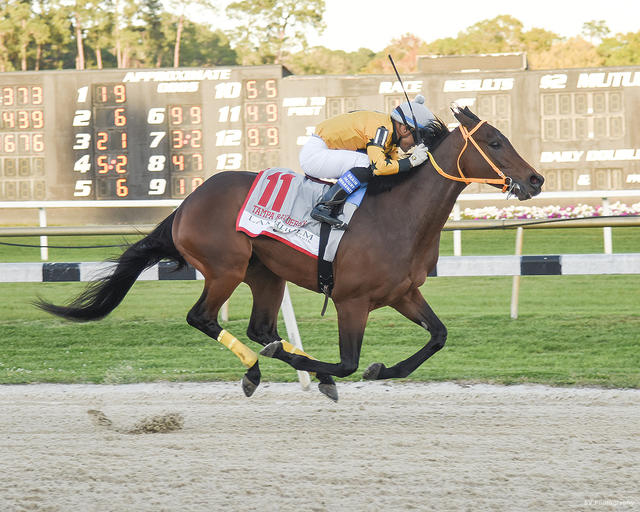