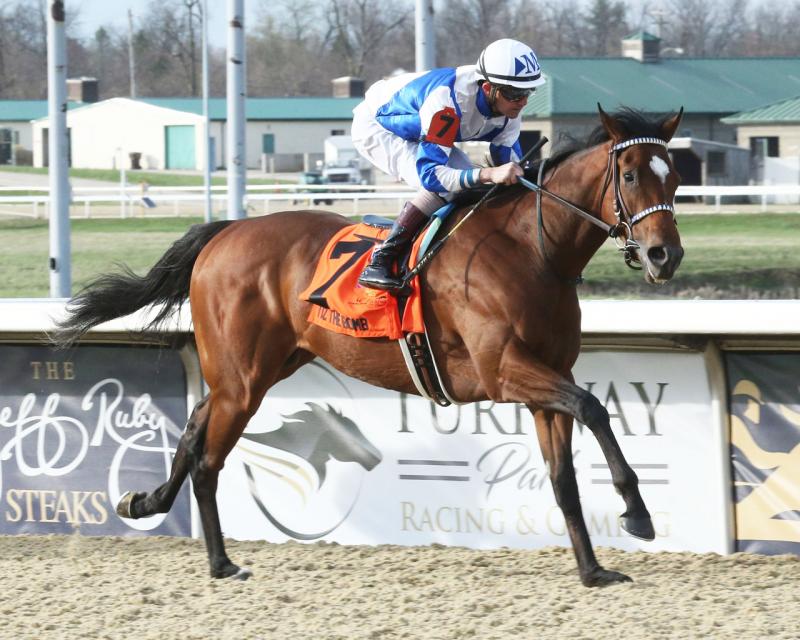 The $600,000 Jeff Ruby Steaks (G3), a Kentucky Derby qualifier worth 100-40-20-10 points to the top four finishers, was the biggest prize on a stakes-packed afternoon. Tiz the Bomb started as the 8-5 favorite after winning Turfway’s John Battaglia Memorial S. on the Road to the Kentucky Derby, and the Kenny McPeek trainee didn’t disappoint.

Tiz the Bomb won the Battaglia by a hard-fought neck, but the Jeff Ruby was a different story. Under jockey Brian Hernandez, Tiz the Bomb settled in sixth place behind solid fractions of :23.25 and :47.06 set by Dowagiac King. Then Tiz the Bomb unleashed a sustained outside rally to take command, draw away, and win by 2 1/4 lengths.

Bred by Spendthrift Farm and sporting the colors of Magdalena Racing, lessee, Tiz the Bomb is a son of Hit It a Bomb out of the Tiznow mare Tiz the Key. Prior to Saturday, tentative plans called for Tiz the Bomb to skip the Kentucky Derby in favor of a foray to Europe, where the 2000 Guineas (G1) and Epsom Derby (G1) beckon. But McPeek hasn’t completely shut the door on a Kentucky Derby bid, so stay tuned for further developments in the coming days.

In contrast to the unsurprising outcome of the Jeff Ruby, the $250,000 Bourbonette Oaks produced a massive surprise. The 1 1/16-mile Kentucky Oaks qualifier was expected to go the way of 2021 Rags to Riches S. winner Sandstone, favored at 8-5 in her 2022 debut. But Sandstone never challenged while racing in midfield throughout, allowing 52-1 longshot Candy Raid to spring a stunning upset.

The daughter of Candy Ride was unhurried early under jockey Rafael Bejarano, trailing the 12-horse field through an opening quarter-mile in :23.69 and remaining far back through continuing splits of :47.59 and 1:11.85. But Candy Raid was absolutely full of run around the far turn and down the homestretch, surging past her rivals with complete authority to dominate by 4 1/2 lengths.

Keith Desormeaux trains Candy Raid and also owns the filly in partnership with Don’t Tell My Wife Stables. Previously fourth in the Silverbulletday S. and eighth in the Rachel Alexandra S. (G2), Candy Raid is nominated to the Kentucky Oaks and could certainly be bound for Churchill Downs after her breakthrough Bourbonette Oaks success. 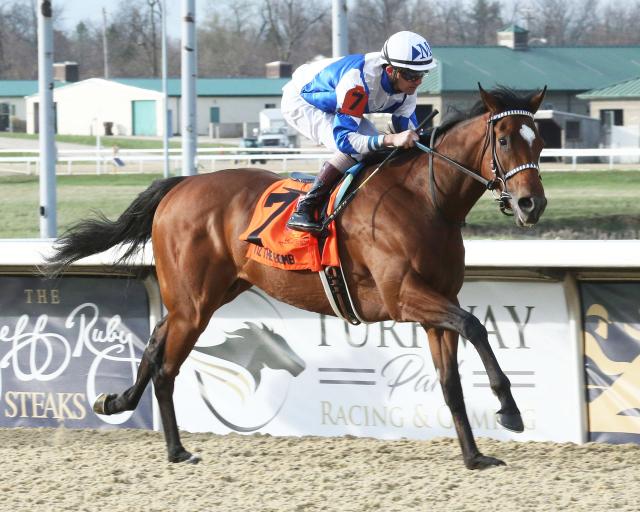