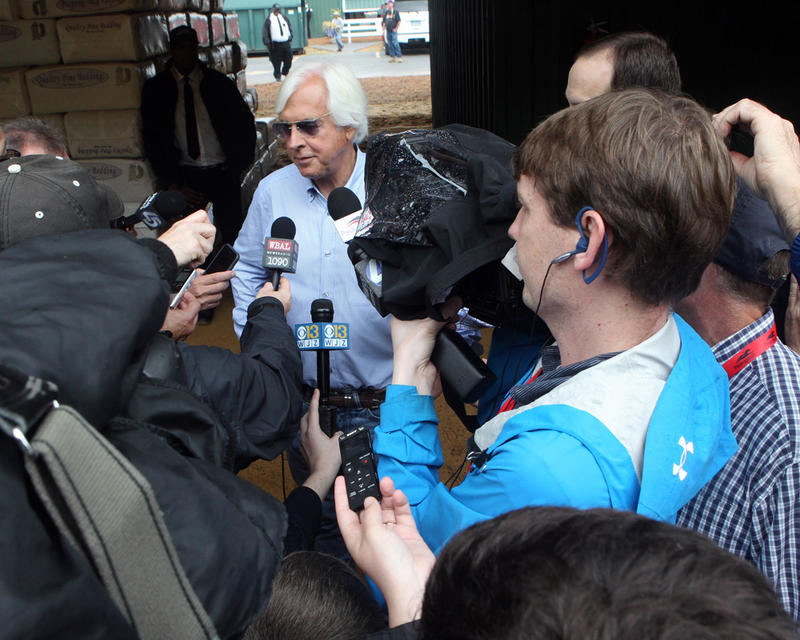 Bob Baffert surrounded by a media scrum (Horsephotos.com)
Racing Hall of Fame trainer Bob Baffert has been here before, but he’s never enjoyed it.

“Here” is days out from the Belmont Stakes with a Kentucky Derby-Preakness Stakes winner going for the Triple Crown. “It” is all the hoopla that surrounds trying to achieve one of the most difficult tasks in horse racing, if not all of sports.

“Every time I’ve been in this situation before I’ve always wondered, ‘Is this the one?’ or ‘Can this even be done?’” Baffert said the week Justify resumed on-track training at Churchill Downs. “Now we’ve done it. We had one of the ones and know it can be done, so now I feel like I can enjoy the ride more.”

The aforementioned horses’ classic wins make up 9 of Baffert’s record-tying 14 wins in U.S. Triple Crown races. In addition to the previously mentioned quartet, Point Given and Justify are both dual classic winners, and Lookin at Lucky won the 2010 Preakness. Justify’s Preakness win tied Baffert with D. Wayne Lukas at 14 Triple Crown wins apiece.

“Anytime a great athlete comes along, people always want to debate who’s better,” Baffert said. “In basketball it was [Michael] Jordan or [Kobe] Bryant then here comes Lebron [James] and some people think he’s the best.

“Horse racing—especially the Triple Crown—is different though because you’re only racing against your crop. The challenge is to beat the best of your generation, so I don’t like to compare my horses just how my horses compare to their crop.”

So far that comparison is favorable with Justify being undefeated in 5 starts, including 3 Grade 1 wins. A Belmont Stakes victory would make him just the second undefeated Triple Crown champion along with Seattle Slew (1977).

“This is a really strong crop,” Baffert said of Justify’s rivals. “[2017 champion two-year-old male and Breeders’ Cup Juvenile winner] Good Magic is a really top horse. If we weren’t in these races, there’s a strong chance he’d probably be going for the Triple Crown.”

Good Magic finished second to Justify in the Kentucky Derby before pressing his foe in the Preakness and fading to fourth late.

“When [Good Magic] took us on in the Preakness, as a fan I loved it because these were two top horses going toe to toe and neither was giving in. As trainer of Justify I didn’t like it, but fortunately I had the superior horse that day. [Justify] is fast but he’s adaptable too. [Jockey] Mike [Smith] knew just when to use him throughout the race.”

Baffert said nothing short of Justify’s “A” game will be good enough on June 9 at Belmont Park.

“You can’t bring your ‘B’ game to the Belmont Stakes,” Baffert said. “Not every horse in there will bring his ‘A’ game, but the ones who do can beat us if we’re not at our best. I don’t think every horse brought his ‘A’ game [in the Kentucky Derby].”

Baffert has pushed all the right buttons to date with Justify, getting the son of Scat Daddy to bring his “A” game to all five starts, but there is one thing Baffert would change about the Belmont Stakes vis a vis the Kentucky Derby and Preakness Stakes: the weather.

“I’d like to see a fast track in the Belmont Stakes,” Baffert said. “I don’t want it too deep or loose, and a wet track can be abrasive. We know he can run on anything, and I’d like to see it fast.”

In a game sometimes built on rivalries, one storyline this Triple Crown season has been the relationship between Baffert and WinStar President (and former trainer) Elliott Walden, who saddled Victory Gallop to a 1998 Belmont Stakes victory by a nose over Real Quiet. WinStar is a co-owner of Justify.

“I’m just glad he put me on the WinStar training squad,” Baffert said. “I’m very fortunate to be a part of that team, and when a former trainer sends you a horse you know there’s a respect there, so that’s meant a lot. What WinStar has done is incredible with two Derby winners in nine years and a world class stallion roster.”

Surrounded by good horses and good people, Baffert is in a better position than ever to enjoy the ride, and he hopes the fans do too.

“A good horse can bring more people together than anything else in this sport, “Baffert said. “I know this is the time everyone’s watching, and we hope to put on a good show. Everyone seeing how fun it is to have a good horse is good for racing.” 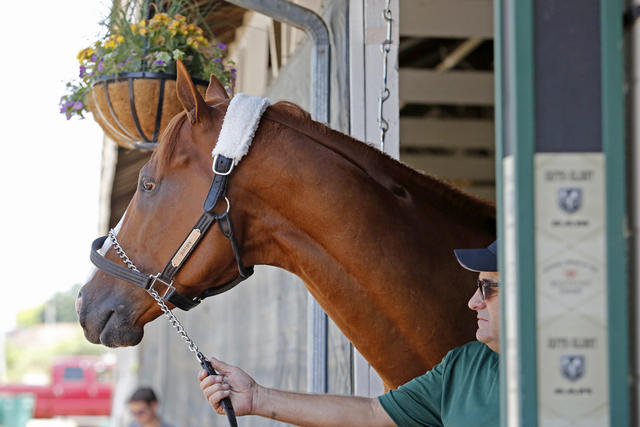