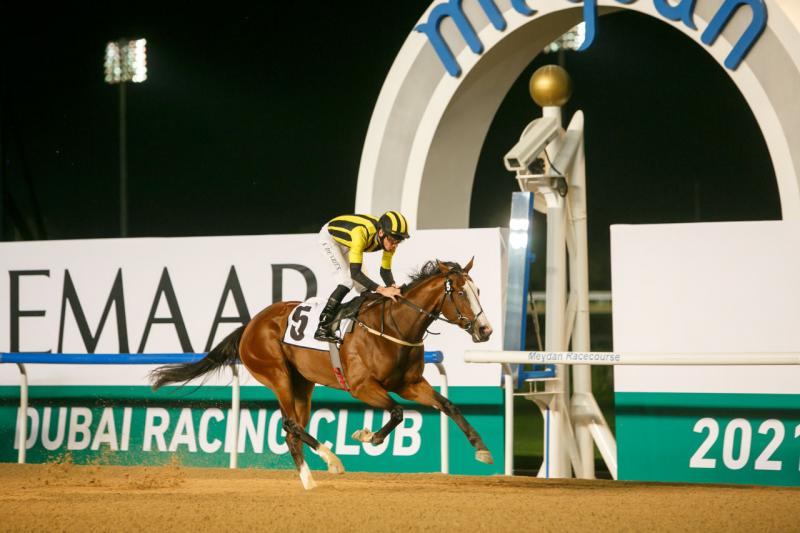 KHK Racing’s Shahama could have a stateside campaign in her future after remaining undefeated in Friday’s $150,000 UAE Oaks (G3) at Meydan in Dubai. The half-sister to two-time Eclipse Award champion Lookin at Lucky was heavily favored in this scoring race on the Road to the Kentucky Oaks, and she prevailed readily enough despite making things tougher on herself.

Slow to break when the gate opened, Shahama then was climbing at the rear of the field. Regular rider Adrie de Vries later told the Dubai Racing Channel that the kickback was worse this evening, and Shahama was feeling the dirt in her face.
Meanwhile, Remas set a contested pace on the inside. Hot Pink forced the issue early, then Minwah moved up between them to ratchet up the pressure on the leader.
By that point, Shahama had steered to the outside to get away from the spray. Under confident handling by de Vries, the Fawzi Nass trainee easily began circling rivals on the far turn, and she breezed past Remas and Minwah in the stretch. Arabian Gazelles stayed on well in pursuit, but the winner was much too good.
Shahama had to be kept to task by de Vries as she crossed the wire two lengths clear. Although her final time for about 1 3/16 miles was a slow 2:02.25, it was sufficient to earn 50 Oaks points.

De Vries noted that the festival atmosphere got to Shahama, who hadn’t encountered an infield screen and music in her previous raceday appearances.

“She was very upset today because of the screen, the music, (the start being in) the straight (in front of the stands),” the jockey told Dubai Racing Club. “She jumped a bit awkward because she was sitting down in the gate.

“It was a little bit awkward as there were a few horses who couldn’t bring me to the leader, so I had to go wide to get her out of the kickback, but she did it very easy.”

The rest of the points went to fillies who are still maidens. Arabian Gazelles, fourth in her debut last out, improved for a promising second and banked 20 points. Minwah picked up 10 points for finishing another 3 1/4 lengths back in third, and fourth-placer Remas took home five points. Next came Uchchaihshravas, Shadzadi, and the tailed-off Hot Pink.
Now 4-for-4, Shahama has rapidly climbed the ladder from her Dec. 9 debut and Jan. 1 conditions race to turn a fillies’ classic double. The blaze-faced bay sailed through the Jan. 28 UAE 1000 Guineas over a metric mile, and handled the added distance in the UAE Oaks.
The Mar. 26 UAE Derby (G2) versus the boys had been mentioned as a potential target, but Shahama would have to cope with even more pre-race festivities on Dubai World Cup night. Indeed, de Vries’ postrace comments sounded as though her itinerary could be revised, with “rumors” of her returning to the U.S. Shahama was bred by SF Bloodstock in Kentucky, and Nass purchased her for $425,000 at OBS last April.
By Munnings, Shahama is out of the Belong to Me mare Private Feeling, who is responsible for multiple Grade 2 winner Kensei as well as the aforementioned Lookin at Lucky. Champion at both two and three, Lookin at Lucky captured five Grade 1 races including the 2010 Preakness (G1) and Haskell (G1). 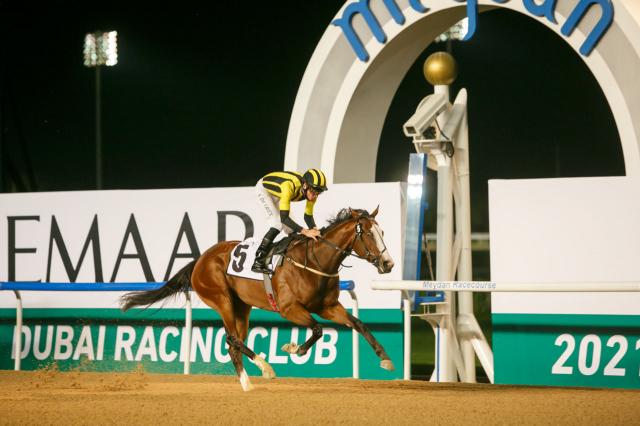