Sackatoga Stables’ undefeated Grade I winner Tiz the Law will lead a field of nine promising 2-year-olds entered in Saturday’s $300,000 Kentucky Jockey Club (GII) – the co-featured event on Saturday’s penultimate day of racing at the 2019 Fall Meet at Churchill Downs .

Billed as “Stars of Tomorrow II,” each of the 12 races on Saturday’s card are exclusively for 2-year-olds that may have aspirations of trail-blazing their way to next spring’s Kentucky Derby Presented by Woodford Reserve (GI) and Longines Kentucky Oaks (GI).

Tiz the Law, trained by veteran horseman Barclay Tagg, rallied from off the pace to score a four-length victory in the $500,000 Champagne (GI) nearly two months ago at Belmont Park. The son of Constitution arrived at Churchill Downs on Monday afternoon and made his first appearance on the track Wednesday for a light jog and schooled at the starting gate.

“He surprises us every day with what he has,” Tagg said. “It’s what we look for and hope for.”

“He’s got a good way about him,” Tagg said. “He’s interested in many things in his life but he doesn’t act silly. He’s all business on the racetrack.”

Tiz the Law has the same connections as 2003 Kentucky Derby (GI) Funny Cide. Sackatoga Stable, a partnership group primarily based on the East Coast, is scheduled to have a large presence at Churchill Downs on Saturday with more than 50 people making the journey from New York, according to managing partner Jack Knowlton.

“We rarely buy anything but New York breds,” Knowlton said. “This was a very different situation purchasing him than it was for Funny Cide – not to mention this horse is a colt and not a gelding. We’re still a very small operation but we have big dreams like everyone else.”

The son of Constitution will attempt to become the first New York-bred horse to win the Kentucky Jockey Club since Eugene Klein’s Notebook won the 1 1/16-mile race in 1987.

Manny Franco will make the journey from his current base at Aqueduct for Saturday’s Kentucky Jockey Club. The duo will break from post position No. 3.

One of the main rivals to Tiz the Law in the Kentucky Jockey Club is Sagamore Farm’s $123,800 Street Sense winner  South Bend, who will make his first start at a route of ground. Trained by Stan Hough, South Bend won at first asking on Sept. 14 at Churchill Downs after he rallied from more than eight lengths off the early pace to narrowly defeat highly-regarded colt Answer In. The bay colt by Algorithms won his next two starts, which included a first-level allowance win by a neck at Keeneland and a one-length score in the Street Sense, the local prep race for the Kentucky Jockey Club.

“He appears to be growing up and maturing,” Hough said.

South Bend will once again be ridden by Julien Leparoux from post 4.

All horses will tote 122 pounds.

Inaugurated in 2005, the Stars of Tomorrow programs at Churchill Downs have helped launch the careers of more than 50 future Grade 1 winners including: Kentucky Derby winner Super Saver; Horse of the Year and Breeders’ Cup Classic winner Gun Runner; 2011 Preakness and 2012 Met Mile and Clark winner Shackleford and Kentucky Oaks winners Rachel Alexandra, Believe You Can and Monomoy Girl. 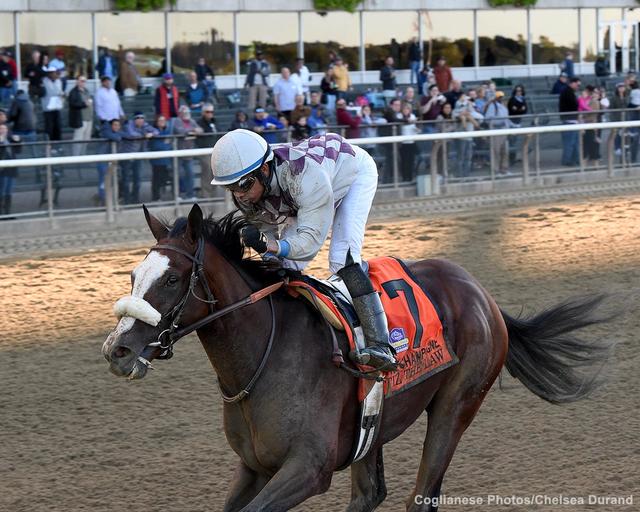