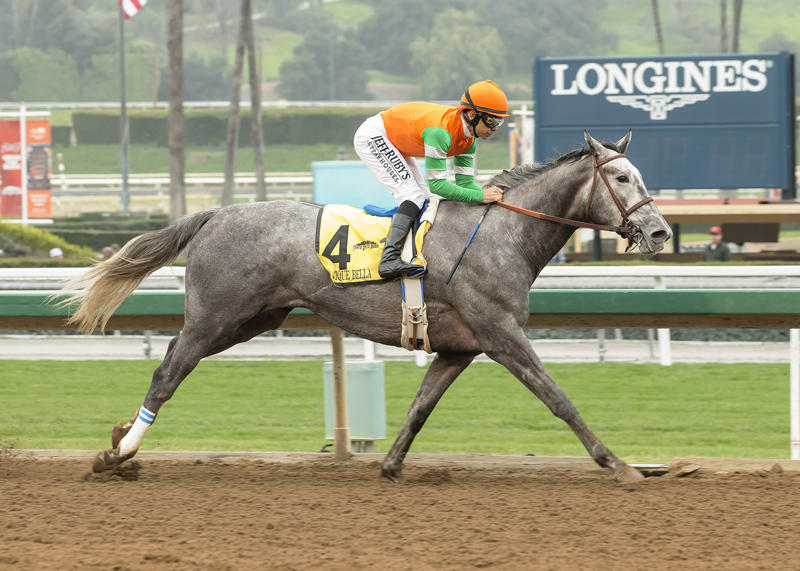 Don Alberto Stable’s Unique Bella drew closer to the top of the Kentucky Oaks Leaderboard on Sunday when romping by 8 3/4 lengths in the $196,000 Las Virgenes Stakes (G2) at Santa Anita Park.

The one-mile race drew a field of five but only four started, with Mopotism quickest out of the gate to set the first split of :22.82. Unique Bella was hot on her hooves, though, and easily sailed bay to take command on the backstretch through fractions of :45.62 and 1:10.27.

The Jerry Hollendorfer trainee kept motoring under her own power, with jockey Mike Smith sitting chilly the entire way. She eventually crossed under the wire in 1:35.66 looking as if she never broke out of a gallop. Unique Bella paid $2.20 as the heavy 1-10 favorite.

The Las Virgenes is part of the Road to the Kentucky Oaks series of points races and awarded points on a 10-4-2-1 basis to the top four finishers.

Unique Bella took home the majority of those points and now sits in third on the Kentucky Oaks Leaderboard with 20 after also garnering 10 for her score in the Santa Ynez Stakes (G2) last out on January 8. The gray daughter of Tapit ran second in her career debut last June at Santa Anita but returned in November to close out her juvenile campaign with a 10-length maiden romp at Del Mar.

Mopotism added four points to bring her total to six, as she previously ran third in the Starlet Stakes (G1). Champagne Room remains on top of the Kentucky Oaks Leaderboard, but just barely. The two she earned in this spot boosted her total to 23. Miss Southern Miss made her Leaderboard debut with one point.

“The way she settled, I could have taken her even farther back. At some point you have to let them be who they are; let them do what they’re good at. I just let her do what she wanted to do and she picked it up and was well within herself. It was an amazing race.

“She’s very talented. She created that move down the backside until about the quarter pole and she was well within herself from that point on. Honestly, even then and I didn’t want her to, but she switched to her right lead and it took her there.

“It’s crazy how she gets up underneath herself. She’s very athletic. I was really happy with the way that she settled. I could have taken her farther back. You want to experiment but you don’t want to do something so drastic that you completely throw them off their game. I didn’t want to grab her any harder. She was very happy. She was pricking her ears and having a good time. I was very happy to let her do whatever she wanted to do after that.

“She’s quick if I want her to be and she doesn’t have to be on the lead. If you’re always out front, someone’s is going to take a shot at you, go at you hard. Now I know that if someone wants to do that, I can settle.”

“You never expect that (winning as easily as she did), but I was pretty confident when Mike kind of made his move early. I knew that he knew he had a lot of horse, so he just went for it and it turned out well. She did settle, and the reason she went was Mike felt like he had a lot of horse. So when he did that, I felt pretty confident that she would really lay it down.”

As to running against males: “I really like to concentrate on the filly races. If an opportunity came to do something else we’d probably have to consider that, but I’d like to keep her against the fillies if I can.

“I have to take it (her ability) in stride, because you just have to. Songbird won her races by a lot of lengths like this filly does, but I don’t like to compare fillies and I won’t compare those two.”

“She’s impressive. You never know when you’re going to run with a wonderful champion two-year-old. You always have second thoughts, but she proved that she is very good. She was very impressive.

“I think it’s too early to say (whether they would consider a run against males to gain Kentucky Derby [G1] qualifying points). We’ll have to take a look at what’s happening around the country. We have to go to the next level first…I’m told I should go to the Kentucky Derby, when the time comes, but we’ll see.” 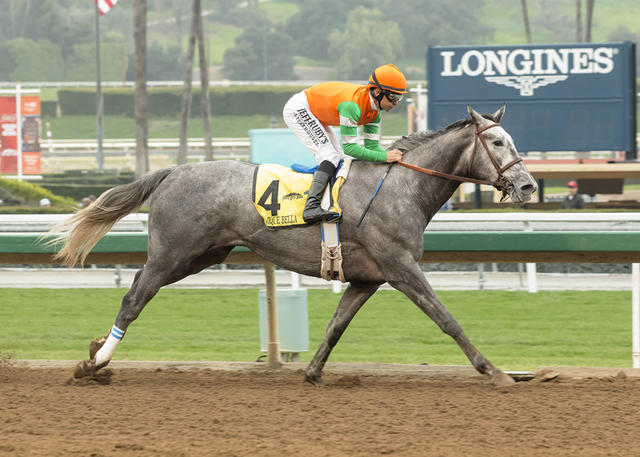