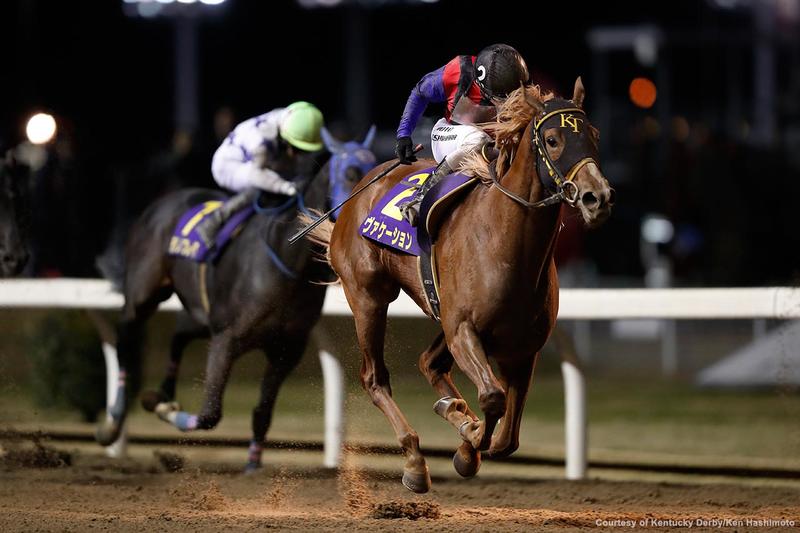 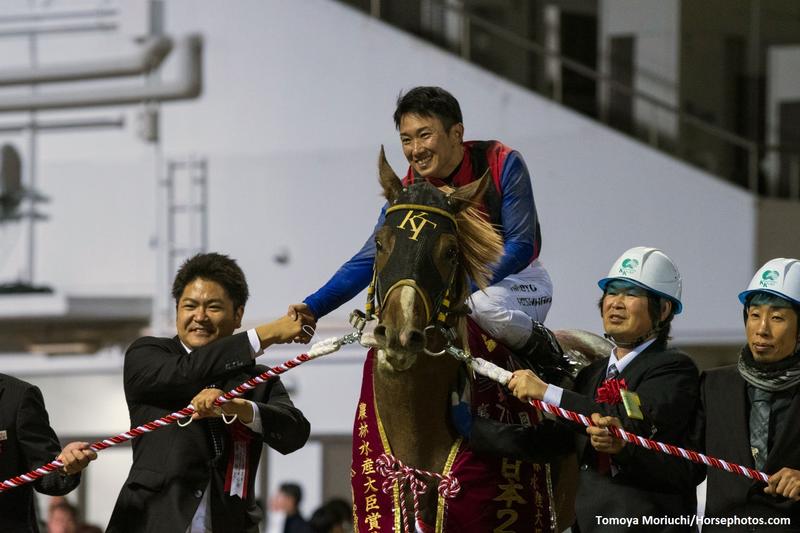 The second scoring race on the Japan Road to the Kentucky Derby, Wednesday’s Zen-Nippon Nisai Yushun at Kawasaki, served up a thrilling finish as Vacation just caught Iolite on the wire. Rallying furiously in deep stretch, the once-beaten colt surged to the top of the Japan Road leaderboard with 20 points.

Vacation, locally based with trainer Kenichi Takatsuki, had to overcome adversity in the build-up to this biggest career victory. The Kawasaki training center was devastated by a deadly typhoon that struck Japan in mid-October, rendering its own track unusable. As a result, the horses residing there have to commute to Kawasaki Racecourse every day in order to continue training.

Aside from the logistical hurdles, Vacation was also up against a few rivals from the elite Japan Racing Association (JRA) circuit. Among them were Iolite, Meisho Tensui, and T M South Dan, but Vacation proved up to the challenge.

Iolite blasted straight to the early lead from his rail post, and for most of the way, appeared ready to carry his speed successfully in this first try around two turns. Imperishable, the winner’s stablemate, chased early until retreating as they entered the far turn. Gold Builder, Meisho Tensui, and T M South Dan were in pursuit a few lengths back without making much of an impression on the commanding front runner.

From further back, T’s Dunk made an eye-catching circling move widest of all. Meanwhile, Vacation steadily advanced for jockey Hiroto Yoshihara, who was able to carve out a passage among horses on the turn. That ground-saving measure helped in a tight finish.

Vacation stayed on strongly inside the sixteenth and forced his head in front of Iolite in 1:41.9 for the metric mile on a good track. Iolite earned 8 points for his valiant try. T’s Dunk kept on churning in a close third, good for 4 points. He was just a half-length behind Iolite – a margin much less than his ground loss on the turn.

Vacation was extending his record to 4-for-5. An eight-length debut winner here on May 17, the chestnut distanced his foes in a local allowance on June 12. Not seen again until September 17 at Ohi, he suffered his first loss when third. Vacation came roaring back last time on October 30 at Funabashi.

By banking 20 points on the Japan Road to the Kentucky Derby, Vacation has supplanted the winner of the first scoring race, Dieu du Vin, who earned 10 points in the Cattleya Sho. Wednesday’s runner-up, Iolite, now sits third on the Japan leaderboard.

The decisive races are yet to come, with February’s Hyacinth at Tokyo worth points on a 30-12-6-3 scale and the Fukuryu at Nakayama offering a bonanza of 40-16-8-4.

Should Vacation make it to Churchill Downs, he’d be trying to succeed on the track where his sire, Espoir City, failed in the 2010 Breeders’ Cup Classic (G1). Espoir City, twice Japan’s champion dirt horse, was 10th in the Classic that witnessed Blame’s epic denial of Zenyatta.

Like so many Japanese performers, Vacation descends from the male line of Hall of Famer Sunday Silence. Espoir City is himself by the Sunday Silence stallion Gold Allure, a noted dirt influence whose latest star is unbeaten Champions Cup (G1) winner Chrysoberyl. 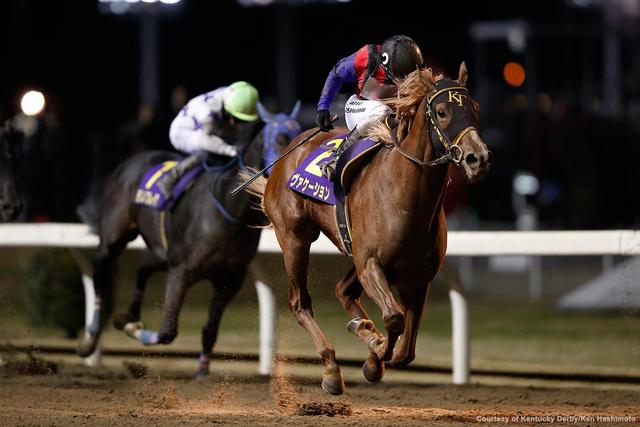