There’s a new three-year-old to follow on the international front. Florida-bred but Dubai-based Walking Thunder romped in last Thursday’s UAE 2000 Guineas Trial, leaving Royal Marine, the pro tem leader on the European Road to the Kentucky Derby, well behind in his dirt debut.

Walking Thunder races for the Phoenix Ladies Syndicate. If Phoenix sounds familiar, that group campaigns last year’s European Road winner, Gronkowski, who finished second to Justify in the Belmont S. (G1). The companion Ladies Syndicate was formed last fall to further opportunities for female ownership, and as the first horse to sport their colors, Walking Thunder is an immediate hit.

Trained by Ahmad bin Harmash, Walking Thunder captured his first two starts at Meydan by daylight. But the UAE 2000 Guineas Trial presented stiffer competition, most notably Godolphin’s Royal Marine, the Prix Jean-Luc Lagardere (G1) winner aiming to transfer his turf form to the dirt. It turned out to be no contest.

While Royal Marine put himself in a poor tactical position with a sluggish start, Walking Thunder flew out of the gate and secured a good tracking spot. He was traveling best of all turning for home, spurted clear in a couple of strides, and drew off by nine lengths. With regular rider Connor Beasley aboard, Walking Thunder covered the metric mile in 1:38.43 to stamp himself as a major contender for the UAE Derby (G2) on Dubai World Cup Day.

More details on Walking Thunder can be found in the Brisnet.com recap of all the Dubai Carnival action.

Royal Marine made some headway en route to finishing fourth. Trainer Saeed bin Suroor was looking for a definitive answer about the colt’s dirt aptitude, but I’d argue the result was inconclusive. On the one hand, it undermined the notion that he could follow in the hoofsteps of dirt-loving stablemate Thunder Snow. Yet on the other hand, Royal Marine wasn’t hopeless on the surface, especially considering that he really needs to race forward. Falling behind early was never going to work.

If Royal Marine gets another chance on dirt, say in the February 7 UAE 2000 Guineas (G3), he may improve with the trial experience under his belt. Still, effectiveness on the surface is relative, and he must show a lot more to compete with a true dirt aficionado in Walking Thunder.

And if he doesn’t, Royal Marine has classic options on the turf back in Europe. There’s ample precedent for Godolphin horses rebounding from flops on the Dubai dirt, the latest example being Masar. Beaten 41 lengths in his dirt foray last March, he went on to glory in the Derby (G1) at Epsom. 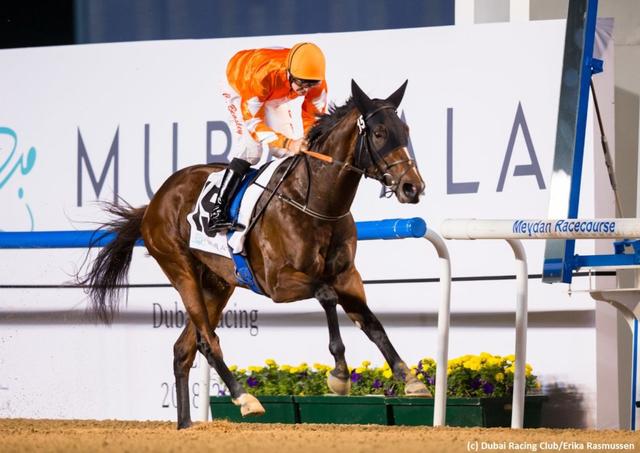